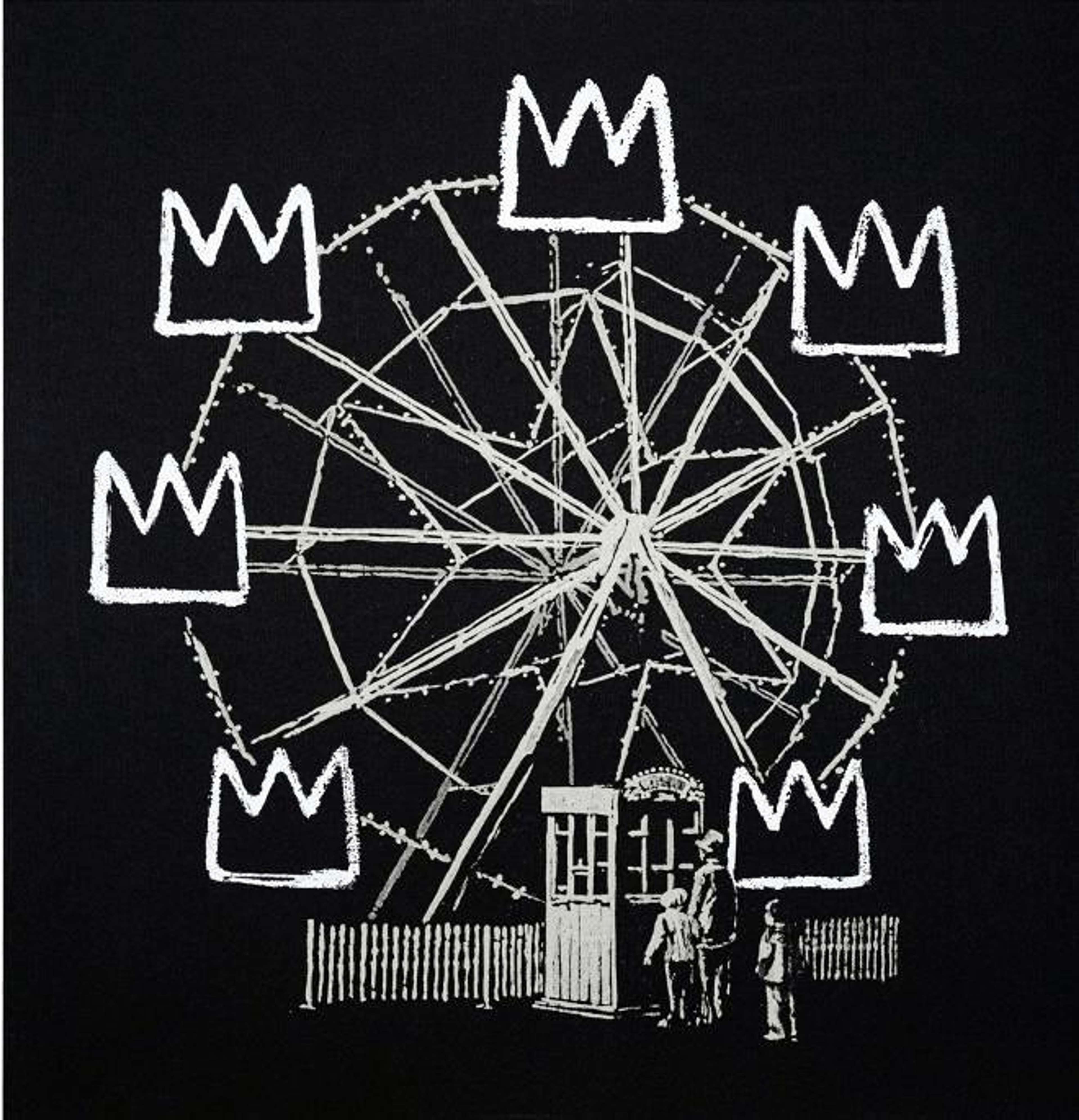 In this witty homage to Basquiat, Banksy offers a mirror to his own practice of appropriation as well as that of the endless wheel of capitalism and consumerism in which masterpieces are reproduced on tee shirts or rehashed for advertising campaigns.

Banksquiat is a striking print depicting a Ferris wheel in which all the carriages have been replaced by Basquiat’s famous crown motif. By referencing Basquiat so openly, Banksy seems to be aligning himself with the tradition of street art as high art, which arguably has its origins in the work of Basquiat whose career was launched by his many interventions in the urban environment, as part of a graffiti duo he founded with Al Diaz on Manhattan’s Lower East Side in the late 70s. Similar to Banksy’s modus operandi, the pair would tag the streets of New York with satirical and often overtly critical messages, all accompanied with the tag SAMO – standing for ‘same old shit’ – accompanied by an ironic copyright symbol.

Banksy makes further reference to street art history by choosing to print his design in grey with the crowns outlined in a chalky white against a black ground. This decision recalls another icon of street – and Pop – art, Keith Haring, who made his name with a series of ‘subway drawings’, rendered in chalk on empty advertising panels in the New York Metro system.

While it can be said to be looking back, the work is also strikingly contemporary, commenting on the excesses of late capitalism that allows artworks to be commodified. At the same time, there is a paradox at play; in order for art to be accessible to all – which is perhaps central to Banksy’s mission as an artist, as well as that of Haring and even also Basquiat – art must be reproduced and shared rather than held ransom by a handful of the elite who own the original artwork or the intellectual property. In this way, Banksy cleverly comments on, as the original website description puts it, ‘the relentless commodification of Basquiat in recent times – by crassly adding to the relentless commodification of Basquiat in recent times.’

This commodification of artworks was exemplified by the opening of Gross Domestic Product itself, which began life as a showroom in Croydon in October 2019, intended to publicise the launch of a new online Banksy ‘homewares brand’. While thousands of fans attempted to buy something from the store, many were disappointed as they found that GDP did not operate as a traditional retail model but instead required the prospective buyer to enter a kind of lottery system in order to acquire one of the products. In this way Banksy opened the floodgates to the commodification of his own work while still retaining a certain amount of control over who his primary sales went to.