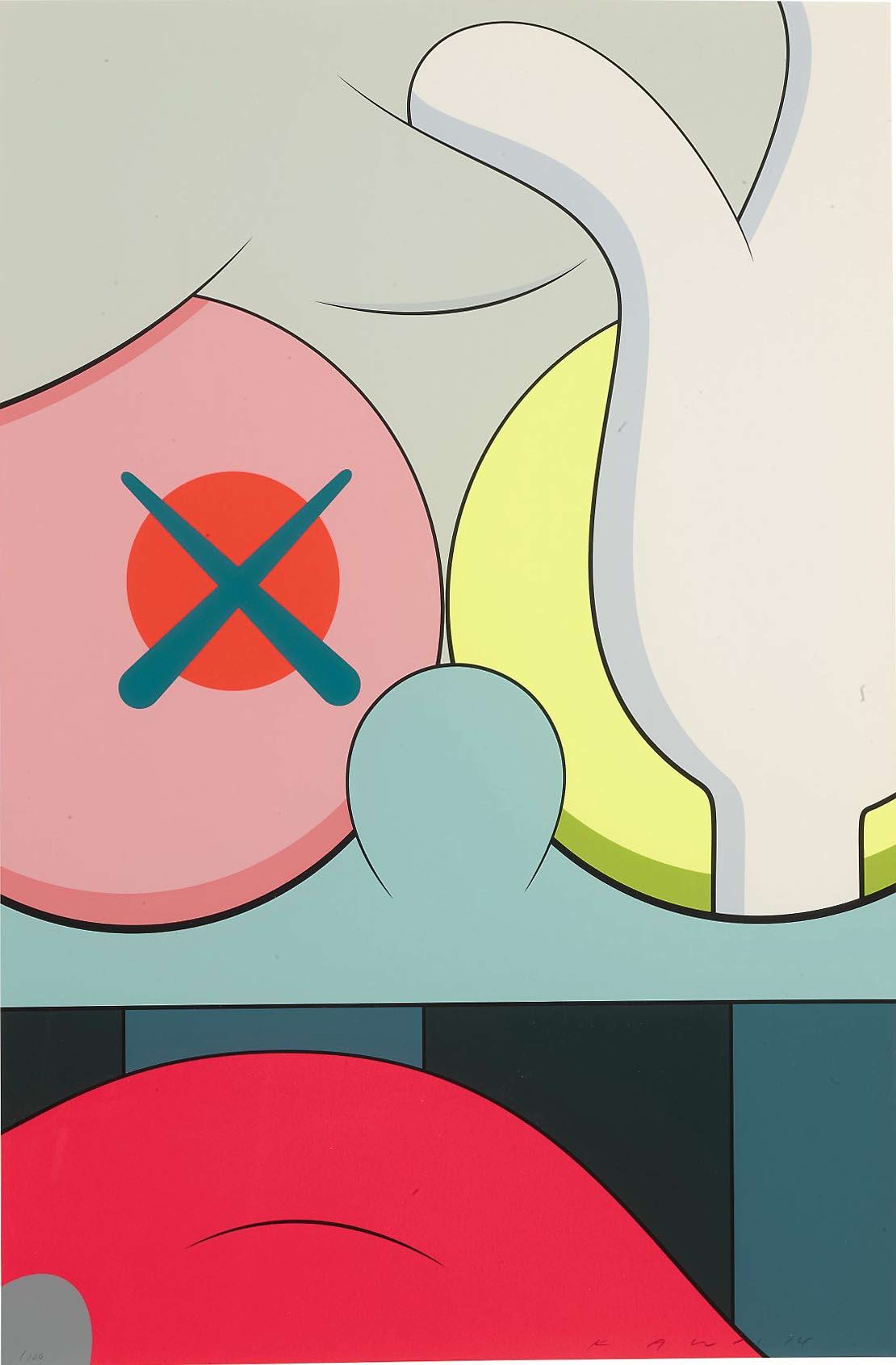 A closely cropped portion of an unknown cartoon character’s face stares out at us from the surface of Blame Game 9 by acclaimed street artist KAWS. Seemingly alarmed, the features are familiar but not quite recognisable, the wide eyes crossed with a half concealed X and the clown like nose pushed up as if against the surface of the screen. The work is part of the artist’s wider Blame Game series – perhaps named after the song of the same title by Kanye West, with whom KAWS collaborated on the art work for the hip hop artist’s 808s and Heartbreak album – which features a number of cartoon close ups in striking colour combinations. This experimentation with colour and screen printing is of course reminiscent of Andy Warhol who produced hundreds of images of Marilyn Monroe’s face in close up in ever more daring colours however here KAWS brings his own signature style to the fore by choosing to focus on just the eye and the mouth to produce an uncanny feeling of attributable fear.

KAWS’ love for appropriating cartoons and popular culture stems from his early beginnings as a graffiti artist on the streets of New York when he would remove advertisement panels from bus stops and phone booths around the city and doctor them to include his earliest characters such as Bendy and Accomplice. These eventually evolved into his Companion figures which became a global sensation when made into limited edition toys in 1999 and now feature throughout the artist’s oeuvre, even appearing as a giant helium filled balloon at the 2012 Macy’s Thanksgiving Day Parade and a massive inflatable in Hong Kong’s harbour for this year’s Art Basel fair.

The enduring appeal of KAWS figures among the art world and the public is testament to the artist’s canny ability to blur the lines between so-called ‘high’ and ‘low’ art. His practice of appropriation and subversion has led to his being compared to Warhol but also other leading Pop artists such as Jeff Koons, indicating that his name will last as one of the leading icons of the early 21st century.

Though KAWS is perhaps best known for his eye catching installations and record breaking paintings he also produces a large quantity of work in editions. As well as still selling his Companion toys through his own website he has produced hundreds of screen prints that capture his flat graphic style and his talent for colour perfectly. An affordable way to collect this stellar artist, this series is produced in an edition of 100 with five printer’s proofs of which this particular print is one. With its bold colours and simplicity of line the work shows KAWS’ knowledge of the medium of screen printing and his daring when it comes to testing its limits.