“Accidents interest me - I have a very queer mind you know. What fascinates me is the people they attract. The patterns those people form, and the atmosphere of tension when something has happened… Where there’s a quarrel there’s always a crowd… It’s a great draw. A quarrel or a body.”

This is a quote by Lowry, who painted this picture of an ambulance in 1935. The word ‘fever’ in the title refers to either diphtheria or scarlet fever, both rife in the small terraced houses around the industrial zones of Manchester. Fever vans were the bleak nicknames for the ambulance cars transporting sick individuals to the hospital. Using his typical colour pallet of blacks, greys and reds, Lowry was a master of composing figures to convey meaning, from milling industrial workers to leaping footballers, he identified the poetic in the mundane formation of people’s gatherings. His inclusion of the mill chimney in the painting could perhaps be a suggestion to the root cause of the spreading of the disease, this being the crowded conditions workers of the mill live in.

The Fever Van had a strange postscript when it was pitched as a Christmas Card by Harold Wilson, Lowry said “No, I am very sorry but I would like you to realise that I don’t wish to have any political association and I’m not giving permission.” 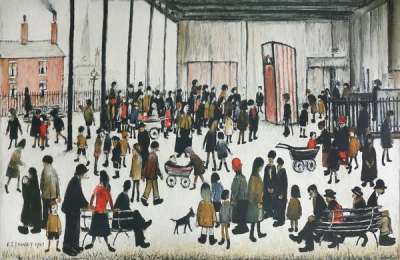