Long Live The King: A Guide To Warhol’s Elvis 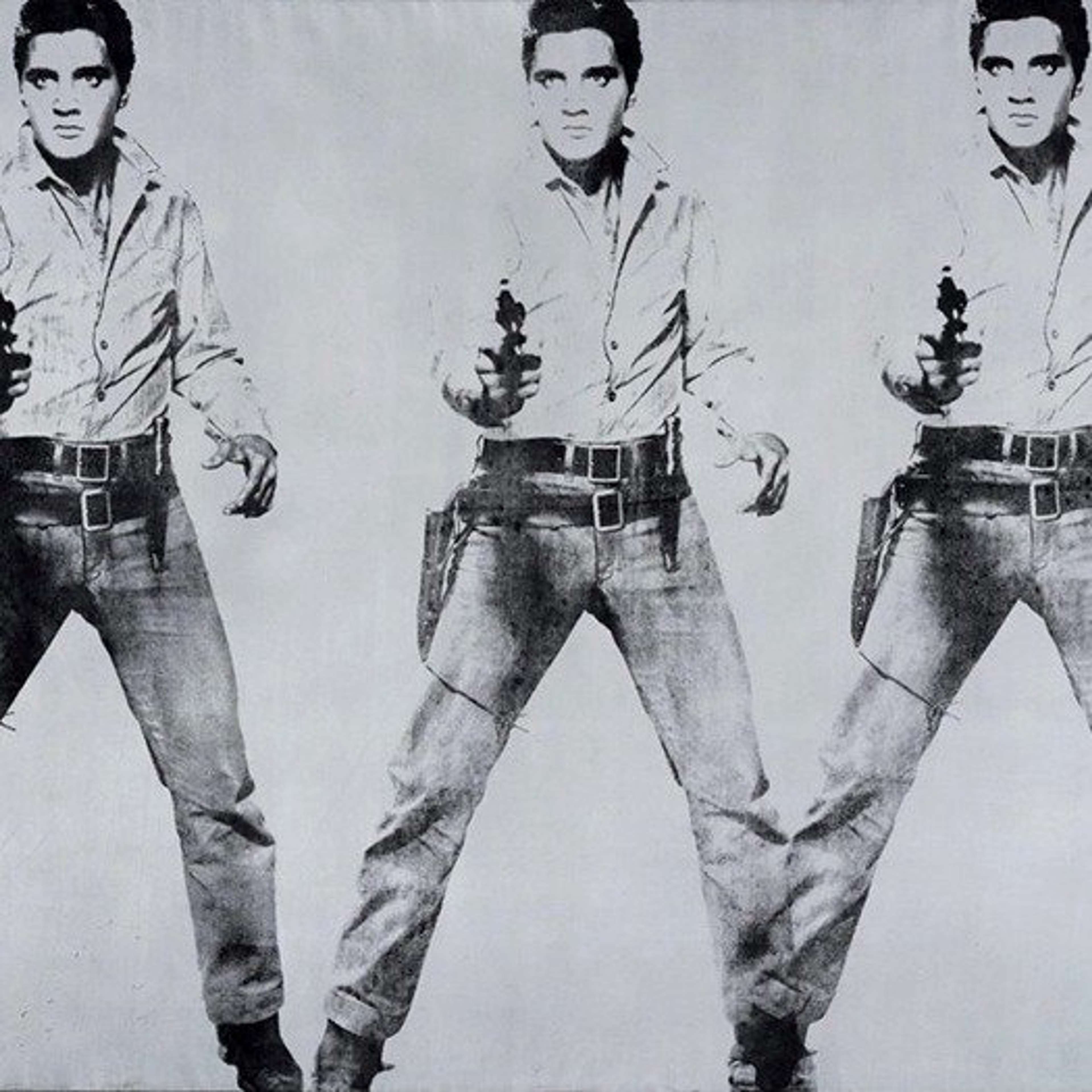 The King of Pop Art meets the King of Rock ‘n’ Roll in Andy Warhol’s paintings of Elvis Presley, which are now some of his most expensive works at auction. Here are 10 quick facts.

Warhol made his first Elvis in 1963

Warhol created his original painting of Elvis from a studio portrait and intended to show it at his 1963 exhibition at Los Angeles’s Ferus Gallery. The gallery, however, wanted something more dramatic. So instead, Warhol made a new version of Elvis as a gunslinging cowboy. He created 23 paintings of these Elvis paintings for the Ferus Gallery exhibition – they are now Warhol’s most famous and recognisable Elvis artworks.

‘‘Andy Warhol in his first ‘Factory’ having created his Elvis series, 1963. The Double Elvis sold for 53 million USD in 2019. A world record for Pop’’ © Ronald Douglas Frazier
2.

But Warhol referenced Elvis as early as 1956

During his work as a commercial illustrator, Warhol created a collage of shoe drawings for Life magazine in which he named each footwear after a celebrity. The (misspelt) ‘Elvis Presely’ shoe was a golden swashbuckler’s boot with a floral rosette.

Warhol’s Elvis portraits are based on a publicity shot

The cowboy image comes from a publicity photograph for the 1960 Western film, Flaming Star. Elvis plays the half-Texan, half-Native American rancher Pacer Burton, who becomes torn between his loyalty to both worlds.

For Warhol – the more Elvises, the merrier

Many of Warhol’s Elvis portraits were repeated in twos or threes on the same canvas, known as the “Double Elvis” and “Triple Elvis”. Warhol had created the first Elvis portraits on one long, continuous canvas – he wanted the singer to appear like he was moving back and forth, as if on a film strip. The single canvas was later divided up into separate works, made up of many single or overlapping images.

The largest Elvis is 36 feet long

Elvis (Eleven Times) is Warhol’s largest painting in the Elvis series. The painting stayed in Warhol’s workshop from its completion in 1963 until the artist died in 1987. It is now on display at the Andy Warhol Museum in Pittsburgh. Many have also interpreted this repeated pattern as a nod to the concept of commercialism in Warhol work, were the repeated motif is used across his oeuvre in works such a Marilyn and Campbell’s Soup.

“I always have to laugh, though, when I think of how Hollywood called Pop Art a put‑on! Hollywood?? I mean when you look at the kind of movies they were making then—those were supposed to be real???” complained Warhol in his memoir POPism.

The Elvis paintings have been interpreted as a comment on the mass-produced nature of Hollywood films, as well as Elvis himself. By 1963, the singer had starred in a string of mediocre films, which the studios were churning out like a line of Campbell soup cans.

Warhol has combined Elvis with Campbell’s Soup Can

To drive home the mass-production comparison, Warhol made Campbell’s Elvis in 1964. The painting blends repeating images of Elvis’s face with a can of ‘Campbell’s Condensed’, commenting on the joint rise of consumerism and celebrity culture.

Campbell’s Elvis was first bought by the Surrealist artist Salvador Dalí, who was a friend of Warhol’s.

A signed edition of Elvis was released after Warhol’s death

Elvis (Blue) is a screen printed porcelain wall plaque, produced by Warhol’s estate with pottery studio Rosenthal. It was released in 49 signed editions, showing both Warhol’s signature and Rosenthal’s stamp.

A museum visitor has fallen into an Elvis painting

In 2016, a visitor at the San Francisco Museum of Modern Art (SFMOMA) tripped and fell backwards into one version of Triple Elvis [Ferus Type] painting… while posing for a photo in front of the work. The painting was quickly sent for conservation and the damage was reported to be “minimal”.

The most expensive Elvis at auction sold for $81.9 million

After nearly 40 years hidden in a private collection, another version of Triple Elvis [Ferus Type] was offered for auction at Christie’s in New York on 12 November 2014. The painting was estimated at $75 million but sold after a five-minute bidding battle for nearly $82 million.

Another Elvis artwork has sold for an even higher price via private sales. In 2008, the unique painting Eight Elvises achieved $100 million (£60.5 million). The seller was Annibale Berlingieri, an Italian collector, who purchased it in the 1960s. The buyer still remains anonymous but is speculated to be a new collector from the Middle East.

While we are all familiar with the wig, the polaroids and the deadpan statements, there was a hidden side to Andy Warhol that only his closest friends were party to. Fascinated by celebrity, Warhol s...
Andy Warhol

Andy Warhol’s studio, The Factory, is probably the most well-known and notorious artist studio in history. Night after night it was the host to all kinds of debauchery, all the while Warhol was in the...
Andy Warhol

One of the most celebrated artists who ever worked in the medium of print, Andy Warhol began his career as a commercial illustrator and went on to become a true icon of the Pop Art movement. His obses...