This signed print by venerated British artist David Hockney is the last in a smaller series of lithograph prints, each depicting the inner courtyard at the Hotel Acatlán in Mexico – a location Hockney discovered by chance when his car broke down in the Mexican countryside. Issued in an edition of 80, it was produced in 1984.

Together with the works View Of Hotel Well I and View Of Hotel Well II, this signed print by British artist David Hockney portrays the central courtyard of the Hotel Acatlán in Mexico. Like these other prints, it can easily be digested as a study for the much larger diptych, Hotel Acatlan: Two Weeks Later, produced – as its title suggests – two weeks after Hockney’s visit, on two canvases with oil paints. It is also similar to the 1985 work, A Walk Around The Hotel Courtyard, Acatlan. In this particular rendering of the scene, Hockney takes an even larger, pronounced step back from his subject matter. Pushing reverse perspective to its limits, the inner courtyard appears before us in an almost triangular shape; the image’s horizon, warped far beyond the confines of any straightforward likeness, appears curved. Recalling the artist’s composite Photo Collages, there is movement to this work; combining multiple perspectives into a composite image, each aspect of the piece is a direct product of the artist having walked around the scene, subjecting it to his scrutinising eye. In 1985, Hockney had a hearing aid fitted. As this piece shows, the hard-of-hearing Hockney has evidently benefitted from a heightened spatial awareness. Commenting on the hearing aid’s benefits, Hockney once said, ‘[Over the last years to compensate for my muffled ears I developed a strong visual space sense I say this because I’m very aware I seem to see in another way that has to do with noticing movement of the eye (time) and perception of space’. 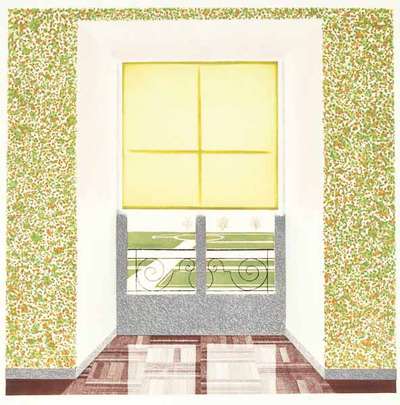