Under The Hammer: Top Prices Paid For KAWS At Auction 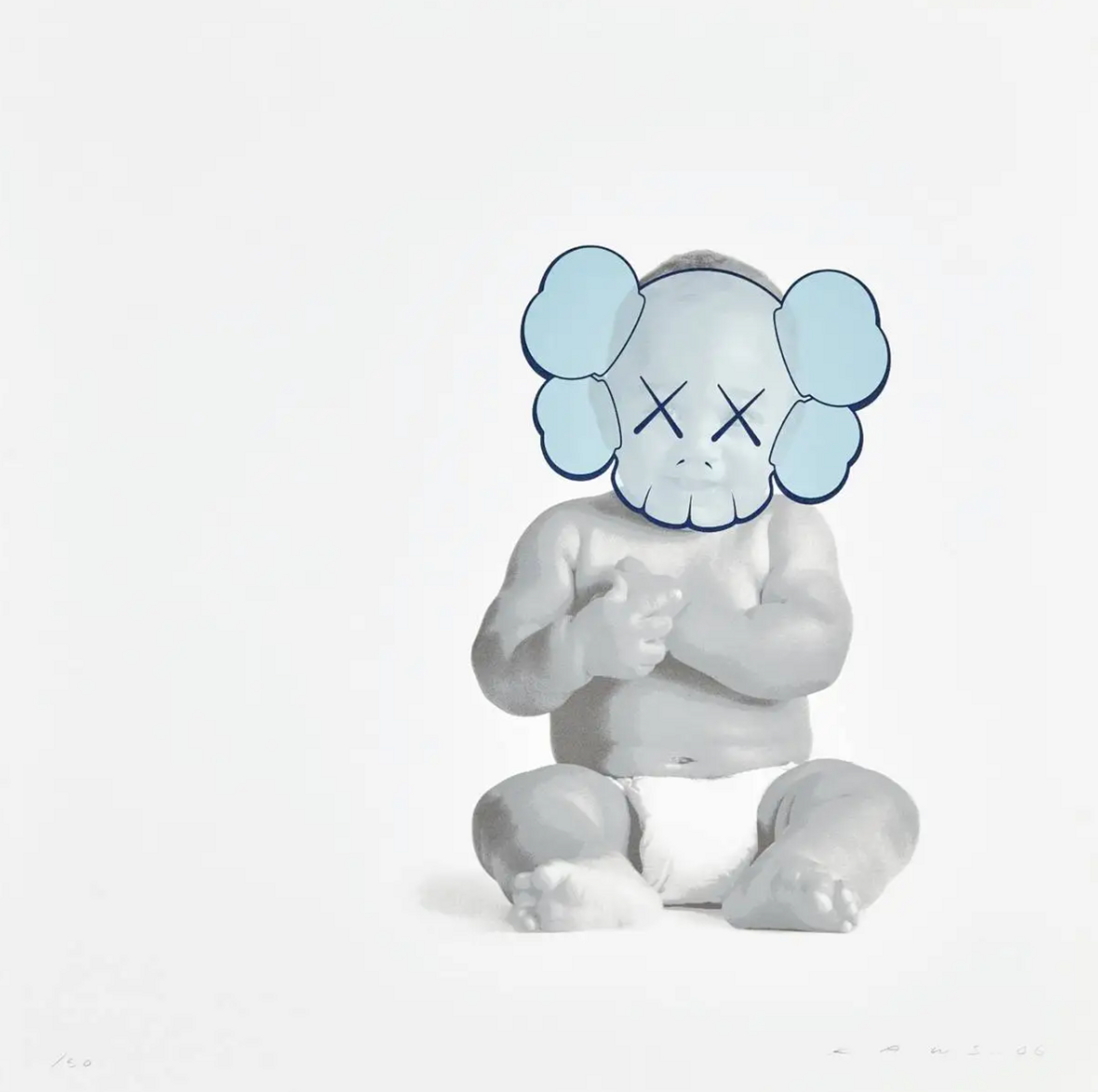 Breaking US$1million at a Western auction for the first time in March 2018, American artist and designer KAWS has since set plenty of new auction price records. Now, his works can command up to tens of millions when they go under the hammer, be those his figures, paintings or even a KAWS print, with the 2019 sale of THE KAWS ALBUM (2005) being a case in point.

When THE KAWS ALBUM was carried into Sotheby’s NIGOLDENEYE® Vol.1 auction in Hong Kong on 1 April 2019, spectators grabbed their phones to document auction history in the making. Bidding started at HK$5 million and a battle quickly unfolded in the saleroom and over the telephones. The painting eventually sold for almost 15 times its high estimate, smashing the previous auction record set for KAWS only a year before.

THE KAWS ALBUM – a parody of The Beatles’ 1967 Sgt. Pepper album cover but featuring KAWS’s signature Kimpsons characters – was formerly owned by Japanese fashion designer, DJ and entrepreneur NIGO®, a long-time collector and collaborator of KAWS. His collection of street art and collectables achieved no fewer than three ‘white glove’ 100%-sold auctions at Sotheby’s in just five years.

KAWS first began creating the Kimpsons works in 2001 and they were his first formal paintings on canvas, bridging the gap between fine art, pop culture and parody. UNTITLED (KIMPSONS #1) was one in a series of Kimpsons paintings commissioned by NIGO® (who also owned the painting at #1 in this list). It belonged to a new owner by the time it was offered in Sotheby’s Hong Kong Contemporary Art Evening Sale on 6 October 2019, but still soared past its low estimate.

An unexpected highlight of Phillips’ 20th Century & Contemporary Art Evening Sale, The Walk Home sold for nearly ten times its low estimate on 16 May 2019 in New York. In this work, a reimagined SpongeBob SquarePants with KAWS’ signature x-crossed eyes – whom the artist calls Kawsbob – screams among dozens of disembodied arms. “SpongeBob was something I wanted to do because graphically I love the shapes… But honestly, I’ve never even watched it,” KAWS has admitted.

A larger-than-life parody of Disney’s Snow White, In The Woods was first offered for auction at Sotheby’s in New York on 3 March 2016, where it sold for almost US$430,000 – barely scraping the sale’s top ten. Just three years later, the painting was the star lot of Christie’s Post-War and Contemporary Art Afternoon Session in New York on 16 May 2019, where it achieved almost US$4 million. This increase of almost nine times the previous selling price is clear evidence of how fast KAWS’s market is rising.

In this surreal and explosive landscape, disjointed figures of Tom and Jerry, the famous cat and mouse, chase each other in “an immersive dystopian scene of environmental disaster,” explains KAWS. The work stands out from the rest of KAWS’ paintings for having a fully completed background – a rarity for the artist. When it was offered at Christie’s in Hong Kong on 25 May 2019, it more than doubled its low estimate.

Untitled (FATAL GROUP) attracted a flurry of bidding when it was offered at Phillips in New York on 15 November 2018, eventually selling for over triple its high estimate and setting a new world auction record for KAWS at the time. The painting reimagines characters from the popular 1970-80s children’s cartoon Fat Albert and the Cosby Kids, but with KAWS’ signature skull faces. KAWS himself was an animator and background painter for cartoons by Disney, MTV and Nickelodeon before he turned his hand to art.

In the 2000s, KAWS began to make works inspired by the 1980s cartoon series The Smurfs, calling his homage the Kurfs. Removing their different personalities, KAWS turned them into almost identical characters with the same x-crossed eyes and skull mouths. In this work, a tiny Kurf holds a giant hotdog — one of the most iconic foods in pop culture — bringing together many elements of American life and entertainment. The work sold at Sotheby’s in New York on 16 May 2019.

Offered just hours before Sotheby’s sold Kurf (HOT DOG) on 16 May 2019 (at #7 on this list), Kurfs (TANGLE) from Christie’s Post-War and Contemporary Art Evening Sale on 15 May also pays homage to the Smurfs. The two works at Sotheby’s and Christie’s, created in 2008 and 2009 respectively, sold for only US$5,000 difference – illustrating the insatiable demand for KAWS works on the secondary market.

A cross between KAWS' signature Companion character and the bubbly Michelin man, Chum (KCB7) once again takes a familiar character and turns it on its head. When it was offered at Christie’s in New York on 15 November 2018, it soared to almost five times its high estimate.

KAWS’ reworking of cartoons and advertising mascots follow a long tradition by older Pop artists like Claes Oldenburg, Tom Wesselmann and Takashi Murakami “who really opened up a lot of doors on acceptance and crossover projects,” KAWS admits. “That made what I was doing a bit easier to translate,” Another inspirational contemporary for the artist is “definitely Jeff Koons. I love his work… It’s so over the top.”

Another highlight of the record-breaking NIGOLDENEYE® Vol. 1 auction at Sotheby’s in Hong Kong on 1 April 2019, UNTITLED (KIMPSONS) was the second-highest lot of the auction, achieving over five times its low estimate. A final KIMPSONS couch gag-inspired painting followed closely as the third most-expensive work of the sale, selling for almost HK$20.6 million

KAWS is drawn to the famous cartoon family for their familiarity, making his caricatures easy to understand. “Icons like Mickey, the Simpsons, the Michelin Man and SpongeBob exist in a universal way,” he has explained. “You just recognize them from the slightest glimpse of their image or sound.”

A Guide to KAWS' Figures

From table-top toys to sculptures, graffiti to paintings, KAWS has created a captivating array of figures throughout his career. Contending with the likes of Mickey Mouse and Hello Kitty to reach wide...
KAWS

KAWS: Art and the Digital World

KAWS is no stranger to digital art. He is largely known for his signature set of cartoon-like figures and is one of the most successful artists to emerge from the New York graffiti scene of the 1990s...
KAWS

A Seller's Guide to KAWS

Brian Donnelly, better known as KAWS, is having more than a moment. The Brooklyn Museum has just announced they are planning a major survey of his work for 2021 and the New York Times dubbed it ‘KAWSM...