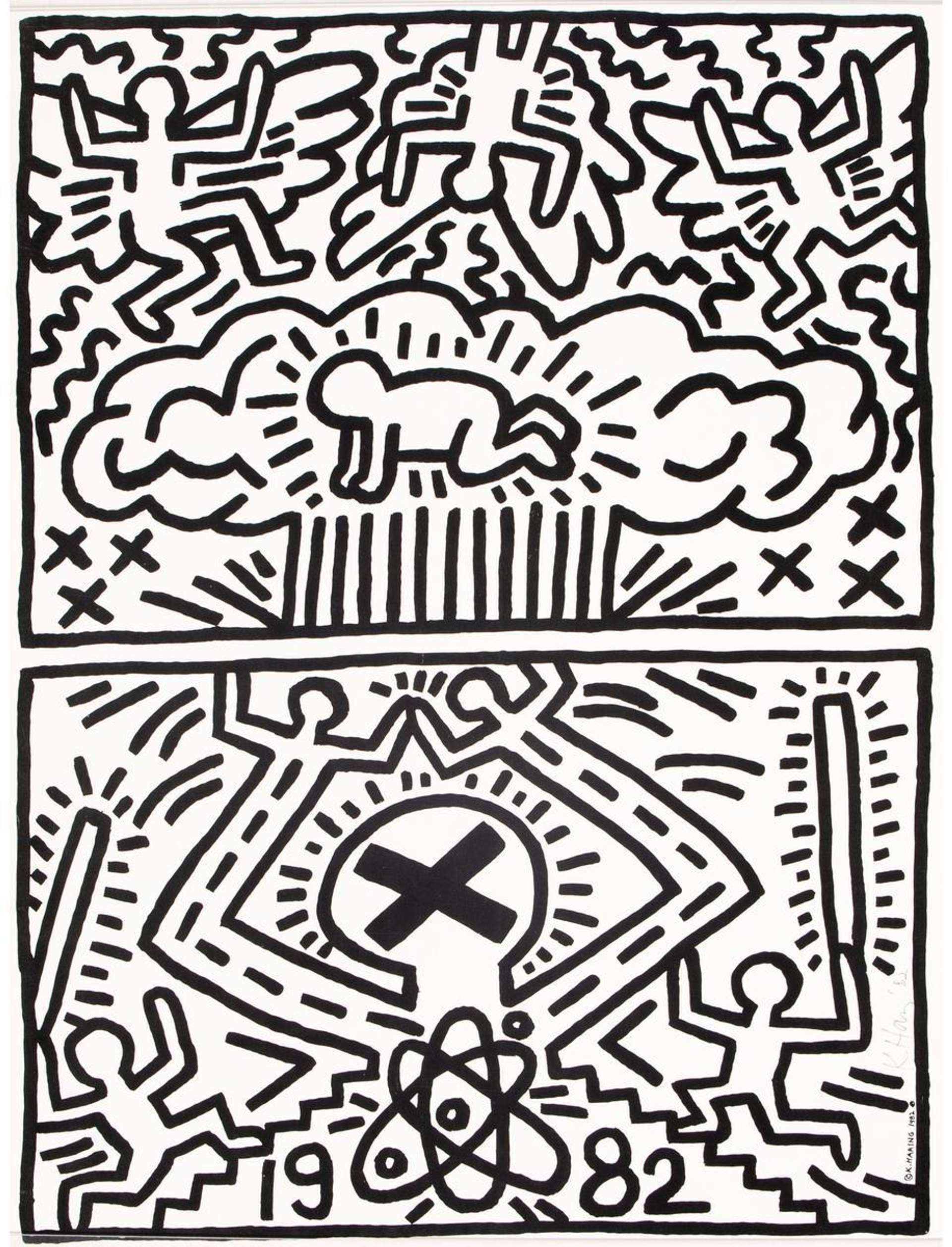 Printed in 1982, Poster For Nuclear Disarmament is an offset lithograph on smooth wove paper by Keith Haring. The print depicts two apocalyptic scenes of nuclear warfare. Haring draws a baby in a mushroom cloud, resonating with images of the atomic bomb exploding in Hiroshima in 1945. The cloud is surrounded by winged, angel-like figures. Below the cloud, Haring portrays distressed androgynous figures, captured in motion. Haring uses his characteristic ‘energy lines’ to capture the chaos of the scene, bringing movement and a sense of panic to the print. The print is rendered in black and white and exemplifies Haring’s characteristic use of thick and bold lines. Full of zig zags, swirls and curved lines, Haring’s style seems to be inspired by Aztec line drawings. These lines bring dynamism to the print and a sense of constant movement.

The bold lines seen in Poster For Nuclear Disarmament are typical of Haring’s work. The ‘energy lines’ emitted by the figures are seen in Haring’s other works, such as the Growing series, and have become a trademark feature of his distinct visual language. Another feature of Haring’s visual language is the use of ‘icons’. The crawling babies, winged people, and conjoined androgynous figures that feature in this print are depicted in various other prints by Haring and are a staple of his artistic creations. Haring’s Icons series features some of his most recognisable motifs, which can also be found in the Pop Shop series.

Haring’s art bridges the gap between the art world and street art, emblematic in Haring’s distinct pop-graffiti aesthetic. Haring rose to fame in the early 1980s by experimenting on unused advertising spaces in subway stations. In these subway drawings and murals, Haring explored serious, political themes such as exploitation and subjugation. This print captures how Haring merges politics and art, as it reflects his fear of nuclear holocaust, which became much more pronounced after the election of Ronald Reagan in 1980s.