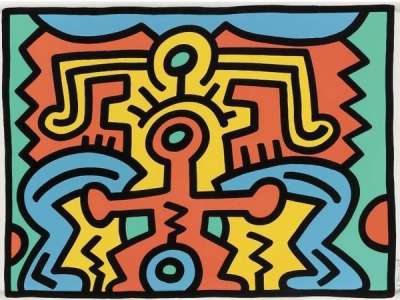 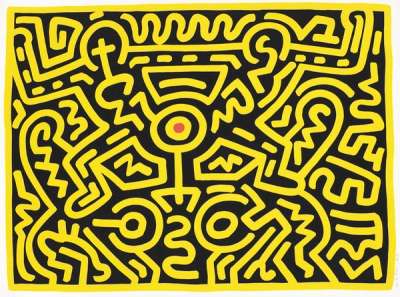 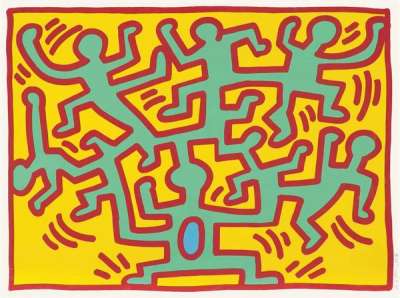 Across the five prints in the Growing series, Haring depicts conjoined or stacked figures that evoke a striking sense of solidarity and community. The vibrant colours and strong lines seen throughout are typical of Haring’s oeuvre along with the characteristic ‘energy lines’ emitted by the figures that evoke the power of people working together.

Formally the works are defined by their use of primary colours combined with black, a bold combination Haring used over and over again to striking effect. This adoption of the bright block colours of advertising and packaging can be traced back to Haring’s early training as a commercial artist as well as Andy Warhol’s influence on the artist.

Made five years after Haring first began experimenting with silk screens, these prints show his natural talent for the medium. Though he had made lithographs earlier in his career it wasn’t until 1983 that he began making screen prints. Adopted from the world of commercial printing, silk screens offered a way of creating multiple images with vivid colours and little variation between prints. This move was undoubtedly due in part to the medium being popularised by Warhol, one of Haring’s most important influences. It soon became evident that the energy and curiosity Haring demonstrated for painting translated perfectly into printmaking and he began to work with publishers across the US, Switzerland, Japan, Germany, France, Denmark and Holland, producing ever more inventive and daring work. Though many of his prints were made in editions of 100 or more, there is an element of precision in every single one that shows the level of care with which he supervised the process.

The Story Of Red And Blue