Although L S Lowry is better known for his paintings of industrial landscapes, the artist was fascinated by the sea throughout his life. Here we discuss the major themes in his seascape prints and paintings and the inspirations behind them.

Since he was eight years old, Lowry sketched little ships on the sea during family holidays at Lytham St Anne’s on the Lancashire coast or Rhyl in North Wales. He later took many trips to the seaside after he retired as a rent collector. For Lowry, the sea represented “The battle of life… And fate. And the inevitability of it all”.

Lowry never lived by the sea as he had wished, but he made numerous paintings of boats, beaches and the waves. Later, in the 1960s and 1970s, he turned many of these paintings into limited-edition prints, choosing them as his most popular and significant works.

In his late teens and early twenties, Lowry took evening art classes at Manchester Municipal College of Art under the guidance of French Impressionist painter Adolphe Valette. Sailing Boats, created in 1912 when Lowry was 25 years old, is one of the artist’s earliest known paintings. The large sails, swirling grey sky and dappled reflections in the water combine the techniques of an Impressionist vision of boats in Saint Tropez with the weather of Northern England. Sailing Boats is believed to be the only work by Lowry that his mother ever praised.

Lowry would later abandon this realistic style of painting, but he continued to paint boats for many years. When he came to produce his limited-edition prints, Lowry returned to Sailing Boats and released 850 signed editions of the artwork – almost 60 years after he first created the work.Lowrys fondness of the subject matter of the sea seems to contrast starkly with his urban obsessions of poverty, smoke and bustle. Still, the air of pessimism was also present in Lowry’s maritime interest:

“I’ve always been fond of the sea. How wonderful it is, yet also how terrible. I often think… what if it suddenly changed its mind and didn’t turn the tide — and came straight on? If it didn’t stop and came on and on and on and on… That would be the end of it all.”

This sense of dread is indeed evoked by Sailing Boats – with a more swirling, Turneresque sky than his cityscapes, this simple picture carries more of a threat than some of the artist’s better-known urban works. The sublime power of nature is rawer in Lowry’s seascapes. Although his mills and houses are bleak, they are simpler in their composition with a more manageable presence. The repeated shapes created by the sails dwarf the figure in the foreground and all is enveloped in a swirling sky that merges without the sea, horizonless and imposing. An intriguing side-note to this work is that it is the only painting that Lowry’s mother ever praised. With their tall, smoking chimneys and imposing size, Lowry’s ferries and steamers are the waterside equivalent of his mills and factories. Just as he captured the increasingly industrialised cities in his landscapes, Lowry populated many of his seascapes with dark, machine-driven ships, looming over little people going about their daily lives. Prints like The Harbour (Maryport) include both a steamer boat and two factory chimneys in the background, combining Lowry’s fascination with the sea and industry.

Cumbria was a destination for Lowry on account of his friend and fellow artist Sheila Fell, who lived in Aspatria and another friend and collector, Geoffrey Bennett who lived in Maryport, where The Harbour (Maryport) was produced. The sea and landscapes of Cumbria made their way into his oeuvre, but only the Lowryan aspects that caught his attention during his travels. For example, in The Harbour, it was the working vessels, jet black with smoking funnels to mirror the smokestacks in the background, that caught his eye, rather than the leisure craft. Sea, sky and middle ground merge into one and other. The boats and buildings create repeating shapes that anchor the composition down. This particular work as many of Lowry’s paintings do, coincides with an important life event. In the year it was completed, Lowry received a letter from Carol Lowry, who he went on to tutor. They formed a close bond and she became somewhat of a muse to the older man. On his death in 1976 Carol inherited Lowry’s entire estate. 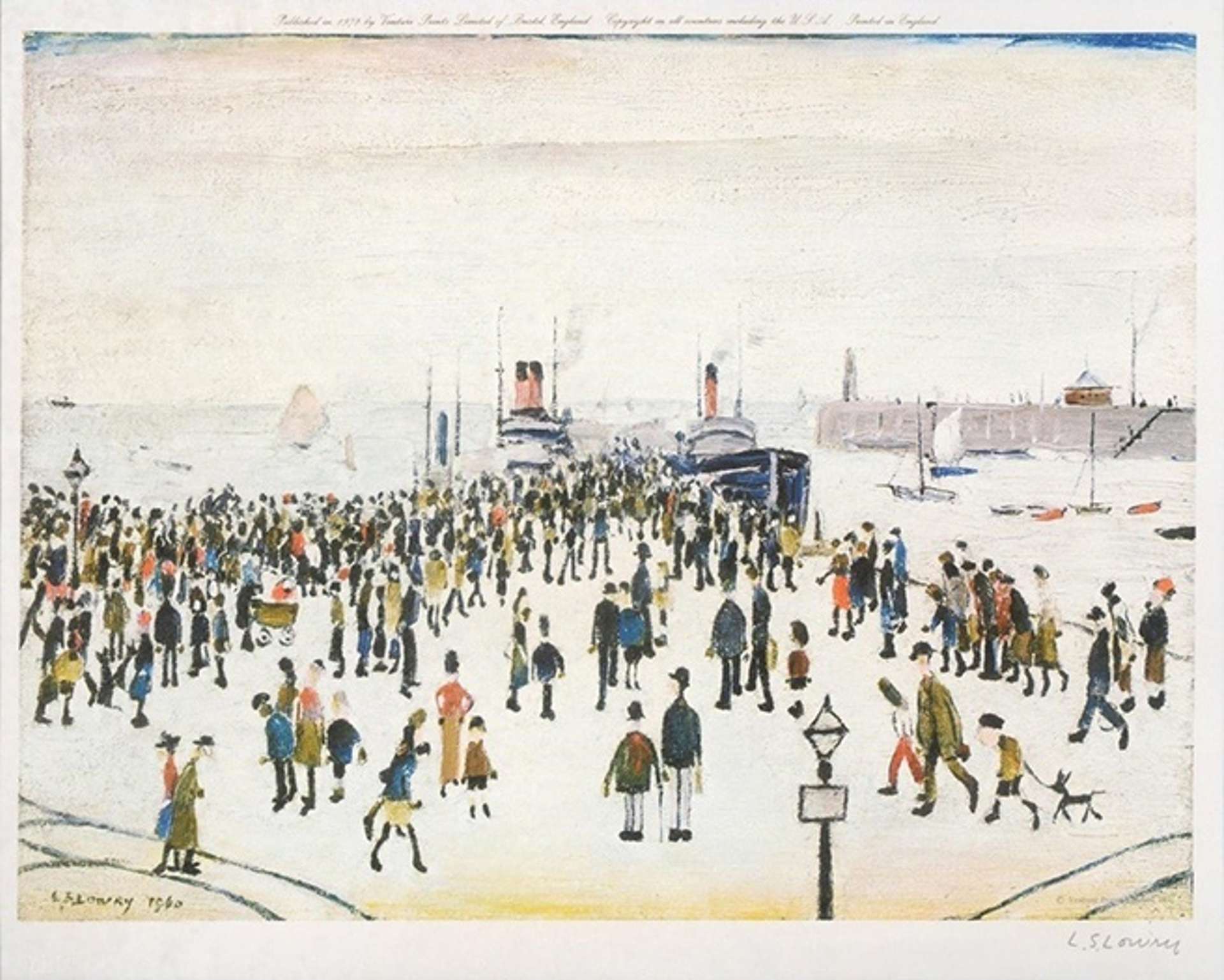 From the mid-1940s, Lowry began to create joyful works of summer outings as people basked in the post-war optimism. Some of his seaside scenes were imaginary, while other paintings depicted beaches around North England, Kent and other parts of the country. Unlike his city scenes – with workers dressed in black rushing around the mill – Lowry’s beach paintings are filled with people in brightly coloured clothes relaxing, playing with their pets or building sandcastles. The artist later released his paintings On The Sands and The Beach as limited-edition signed prints.

Lowry was so inspired by the beach that when he collaborated with Ganymed Press to create 16 original limited-edition lithographs in the 1960s, three of them were beach scenes: The Pavilion, Castle By The Sea and Seaside Promenade. Due to their rareness, these Ganymed lithographs are now some of the most sought-after prints by Lowry collectors.

Seaside Promenade shows a seascape image with large boats and ships moving across the water, and onlookers in the foreground watching from the promenade. After the war, as Lowry tired of his industrial landscapes that he is so famous for, he transported his trademark ‘matchstick-figures’ into rural scenes and seascapes.

The sea was a significant source of inspiration for Lowry. During the 1960s, the artist regularly visited the northeast, staying at the Seaburn Hotel in Sunderland in a room from which he could see the North Sea. The scene is viewed from an elevated position so as to depict the view that stretches far into the distance, as though the artist was looking out from his hotel room. Rather than focus on the effects of weather and light on the sea and sky as would be expected of a typical seascape, Lowry’s drawing focuses on the presence of people and their leisure activities at the seaside.

Lowry’s lithographs including Seaside Promenade are produced by hand whereby a plate is etched and inked, and the paper is then pressed onto the plate to produce an original. Due to this printing process, no two prints are exactly the same.

“I have been fond of the sea all my life, how wonderful it is, yet how terrible it is,” Lowry once mused. In complete contrast to his images of industrial landscapes and crowds, Lowry also painted deserted seascapes, devoid of all signs of life, throughout his career. Some of these views are calm and while others are filled with turbulent, crashing waves.

These paintings of empty oceans, which were never made into limited-edition prints, are often considered Lowry’s self-portrait. As the artist admitted in the early 1940s, a few years after his mother’s death, “I started to paint the sea, nothing but the sea. But a sea with no shore and nobody sailing on it. […] Look at my seascapes, they don’t really exist you know, they’re just an expression of my own loneliness.”

Produced after an oil painting from 1953 of the same name, On The Sands is a lithograph print that shows a number of families on a day out to the beach. The amusing and distinctive vision of British summer time, one that does not show scenes of sunshine and sunbathers, but fully clothed characters with coats and some with hats on is typical of Lowry’s vision. Boats are depicted in the background, but none appear to be in use, as they lay dormant piled up on the sand.

Having painted many industrial city scenes by this point in his career, On The Sands effectively transports the same figures from his townscapes and places them on the beach, wearing the same clothing as they would in the cities. After the war it was common for the working classes to travel by train to the seaside for their annual holiday, and this print is typical of Lowry’s subject matter – capturing the working classes, this time in leisure. Often mistaken as a self-taught artist during his lifetime, L S Lowry’s naïve style was actually honed from many years of art education and practice. Here we take a closer look at Lowry’s favourite ma... The Beautiful Game: A Guide To Lowry’s Football Matches

The football paintings and prints of L S Lowry are among his most popular works, admired by football fans and Lowry collectors alike. Here are 10 quick facts about his best-known football artworks, in... 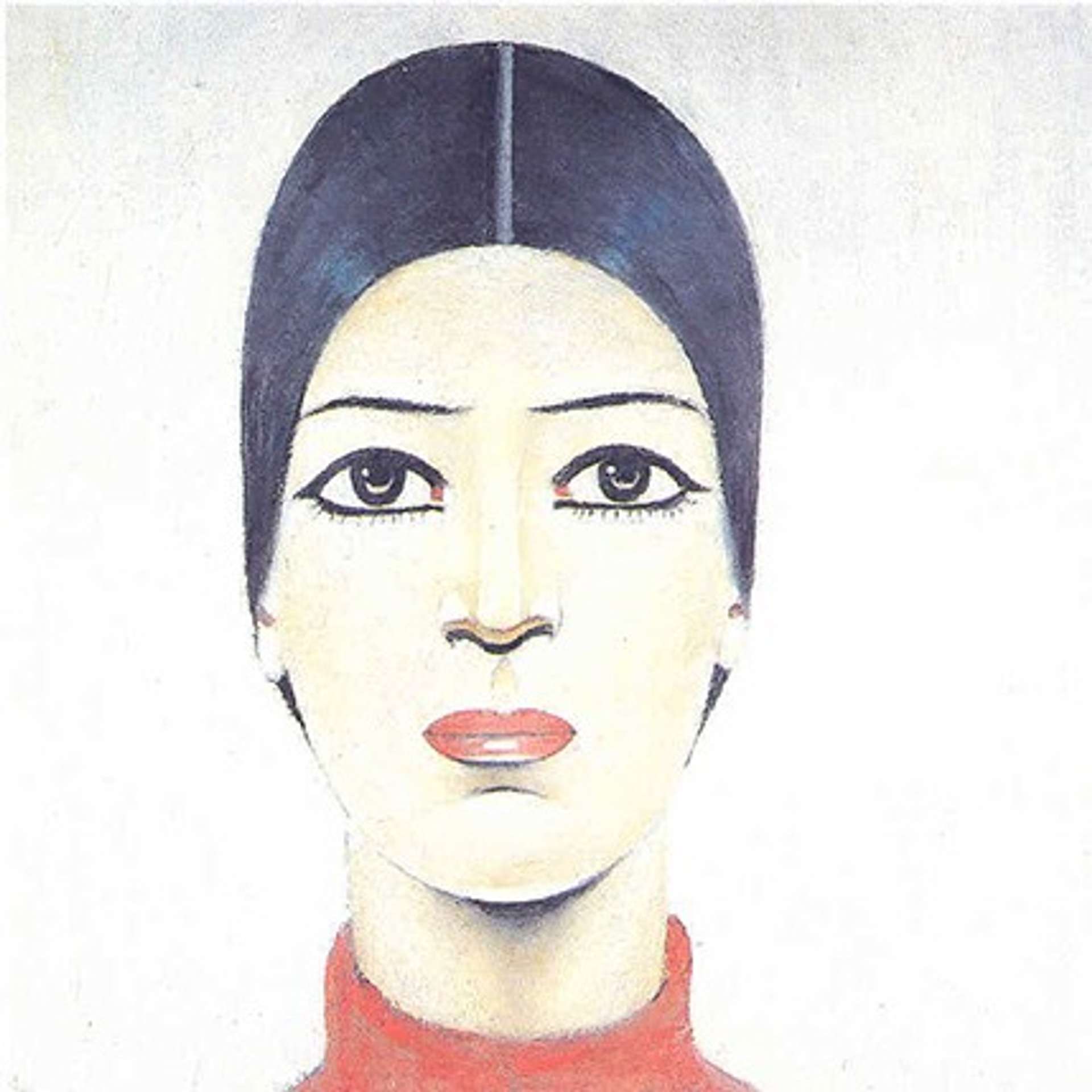 The art of L. S. Lowry was deeply connected to his life. Born in 1887 in Stretford, Greater Manchester, the county’s surrounding factories, football stadiums and people would inspire his greatest pain...