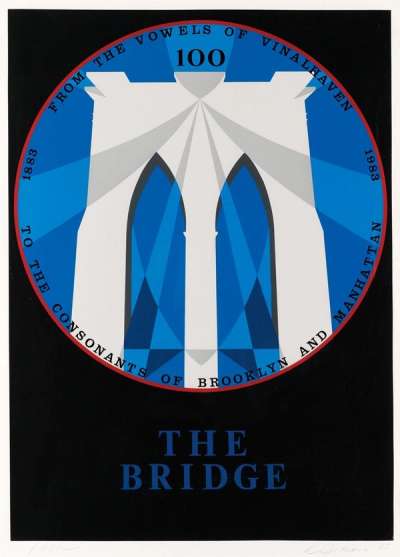 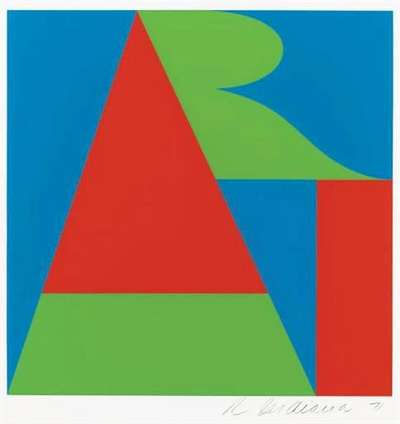 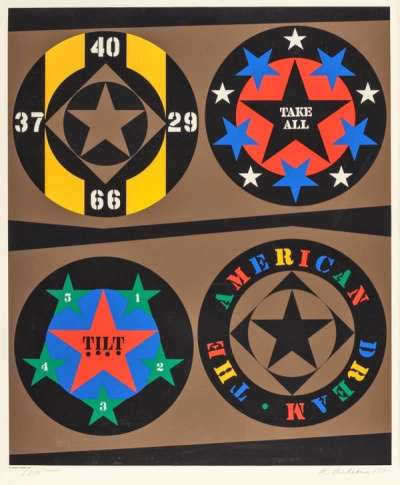 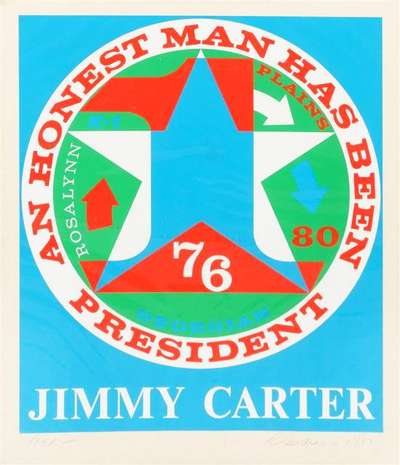 An Honest Man Has Been President: A Portrait Of Jimmy Carter Signed Print
Robert Indiana

Even if the artist himself rejected the ‘pop art’ label, there is no denying the mining of imagery from popular culture, use of graphic typography and avid use of repetition in the Indiana oeuvre. Indiana combines the symmetry and clean lines of stars, squares and circles with textual and symbolic references to his home country, thereby constituting a kind of rolodex of Americana. The compulsion to represent the American experience, for example in handling themes of consumerism, the emergence of celebrity culture and is an undeniable link between the Indiana catalogue to pop art contemporaries such as Andy Warhol and Ed Ruscha.

In a work that recalls Warhol’s Marilyn, The Metamorphosis Of Norma Jean pays tribute to Marilyn Monroe, with the central image of a nude Monroe taken from the “Golden Dreams” calendar which was printed in Indiana’s home state. Indiana’s fascination with numbers emerges in the print, with the numbers 2 and 6, which Indiana found to have multiplicitous significance in the starlet’s life, printed on the left and right edge of the outer circles.

Within this grouping is the American Dream portfolio, which comprises 30 screenprints created during the 1960s, is the work of Indiana’s most prolific period. The initial print from this series, American Dream I, was immediately acquired by the Museum of Modern Art after its exhibition in 1961. In these prints, Indiana mines the American experience and depicts its icons in abstracted forms: allusions to baseball, highways, jukeboxes collide with geometric forms rendered in vivid colour. Many of these cultural allusions are references to memories from the artist’s midwestern upbringing.

Indiana’s childhood was unsettled, with the family relocating several times in the Indianapolis area before he graduated high school. Martin Krause writes that “the omnipresent family car was a more lasting structure in his life than were any of his temporary residences”. The bright, bold colours and crisp edges of the shapes of these prints mirror the highway signs which inspired them.

Also included in this grouping is the Confederacy series, a run of screen prints based on four paintings depicting four of the confederate states. In an expression of his anger at the ongoing racial violence and injustice during the civil rights era, the words ‘Just as in the anatomy of man every nation / must have its hind part’ encircle a map of the state. The maps at the centre of the paintings are dotted with blood-red stars. The Alabama work sees the city of Selma taking the place of the state capital, perhaps in reference to the Selma to Montgomery marches of 1965.

He turned his hand to theatre when he acted as costume designer on a production of The Mother of Us All by Gertrude Stein & Virgil Thomson which centres on the life of suffragette Susan B. Anthony. The series of prints he produced following the production depict the various period pieces designed by the artist for the stage.