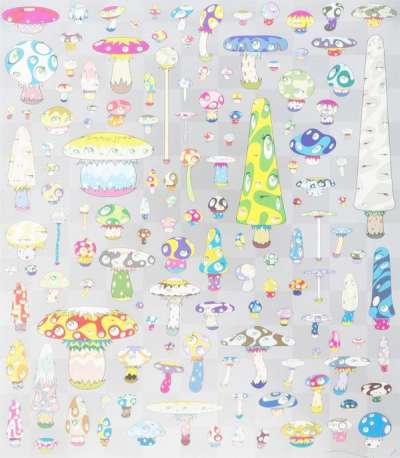 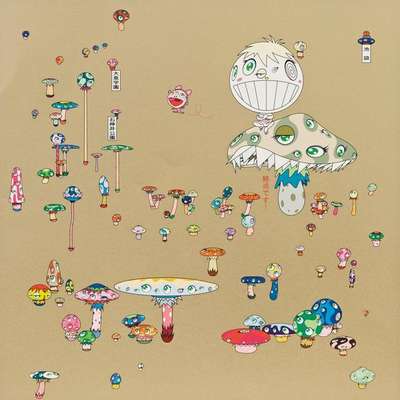 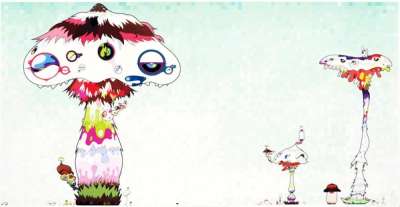 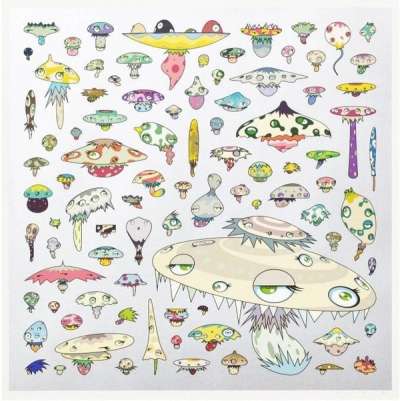 The Mushroom collection is a body of lithograph prints all produced by the renowned Japanese contemporary artist, Takashi Murakami. The prints in the collection all depict Murakami’s iconic cartoon mushrooms, a motif that appears frequently in Murakami’s artworks. The mushrooms all vary in size and appearance, yet all have a surreal quality to their appearance, bringing a psychedelic feel to the prints. Some of the prints in the collection, like Hypha Will Cover The World Little By Little show landscapes of the mushrooms while others, like Posi Mushroom, present a collection of cartoon icons which, evenly spaced across the composition, take on the appearance of a sticker-sheet or sheet of wallpaper.

Otaku and kawaii culture are generally considered part of Japan’s ‘low’ culture, due to their widespread popularity among the masses. By incorporating ‘low’ culture into his artworks, which operate in fine art circuits and sell for large sums of money, Murakami blurs the boundary between ‘high’ art and ‘low’ culture.

Murakami’s ability to fuse ‘high’ and ‘low’ culture into his artworks resonates strongly with the work of Andy Warhol, the father of the Pop Art movement, who made limited edition prints of common everyday objects and consumer goods, like Campbell’s Soup and high heel shoes. Murakami has even been called ‘Japan’s Andy Warhol’ and the artist’s affinity with the screen printing technique and creation of a large factory-sized studio, known as Kaikai Kiki, which is based in Miyoshi, an industrial area outside of Tokyo, is another similarity between him and Warhol.

While Murakami’s style, as seen in the Mushroom collection, is deeply influenced by popular culture and has a strong contemporary feel to it, the artist actually studied ‘nihonga’, traditional Japanese painting, at the Tokyo University of Fine Arts and Music. Murakami’s talent was evident from the start of his studies and the artist went on to obtain an MFA (1988) and PhD (1993) from the university, specialising in this traditional painting style, which incorporates traditional Japanese artistic conventions, techniques and subjects.

Murakami soon became disillusioned with the insular and political nature of the fine art world, which led him to explore more contemporary artistic styles, as evidenced in this collection. Murakami’s time in New York in 1994 also deeply influenced the development of his artistic style, as he met contemporary artists such as Anselm Kiefer and Jeff Koons whose Western techniques Murakami creatively fused with his Eastern heritage and training.