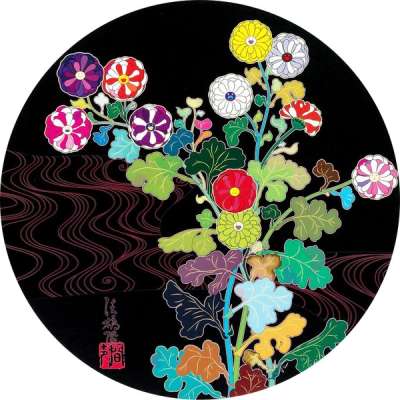 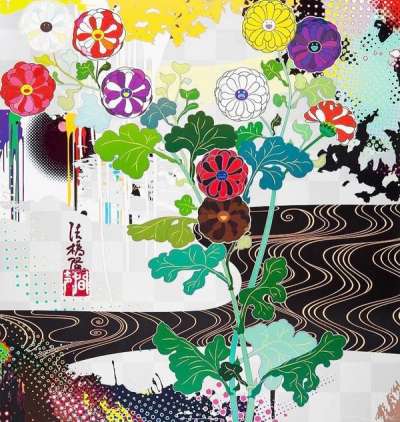 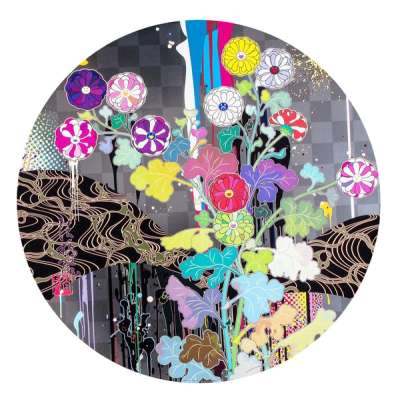 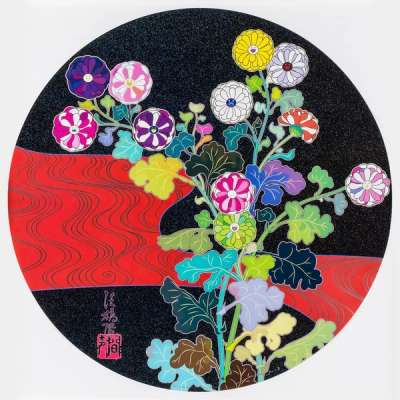 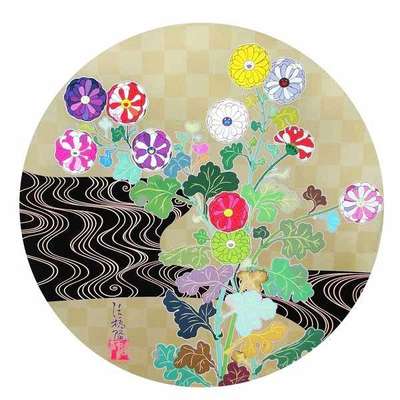 Kansei is a series of lithograph prints, produced around 2010 by the contemporary Japanese artist, Takashi Murakami. The title of the collection refers to the Japanese concept of sensing a situation or an artifact and building an individual emotional response. Murakami is renowned for his ability to fuse East and West in his artworks, and the artist often uses Western fine art techniques to produce prints which are profoundly Japanese in subject matter and meaning.

The series features numerous tondos, a Renaissance term for a circular work of art, either a painting or a sculpture, that derives from the Italian rotondo, meaning round. The collection is not limited to tondos, with prints like Kansei Platinum favouring the more conventional rectangular appearance.

All the prints in the collection feature spectacular compositions of chrysanthemums, rendered in bright and vibrant colours. The flowers are depicted against patterned surfaces, which brings a psychedelic feel to the print. The collection refers to the 17th-century Japanese artist Ogata Kōrin whose white chrysanthemum motifs left a long-lasting impression on Murakami.

The flowers in the Kansei collection stand out and capture the viewer’s attention, despite being rendered against busy backgrounds composed of gold and platinum-leaves. The prints hark back to traditional Japanese painting styles and have a much more traditional aesthetic than many of Murakami’s other artworks which depict flowers, such as the Flower Ball collection.

The Kansei collection captures the influence Murakami’s artistic training had on his visual style. Murakami studied ‘nihonga’, a traditionalist style of Japanese painting, at the prestigious Tokyo University of Fine Arts and Music. Murakami’s talent was evident, and the artist went on to do an MFA (1988) and PhD (1993), both of which centered on this traditional style of painting.

After studying in Tokyo, Murakami went to New York in 1994 where he participated in the competitive PS1 International Studio Program. Murakami’s time in New York profoundly influenced his artistic style and visual language. The trip, which exposed him to a wide range of contemporary Western artists, such as Anselm Kiefer and Jeff Koons, as well as his growing state of disillusion with the fine art world, led to Murakami’s experimentation with a new contemporary style, along with an exploration of new media and artistic strategies. It is largely thanks to the time Murakami spent in New York that the artist is credited with being able to fuse Eastern and Western artistic techniques in his artworks.