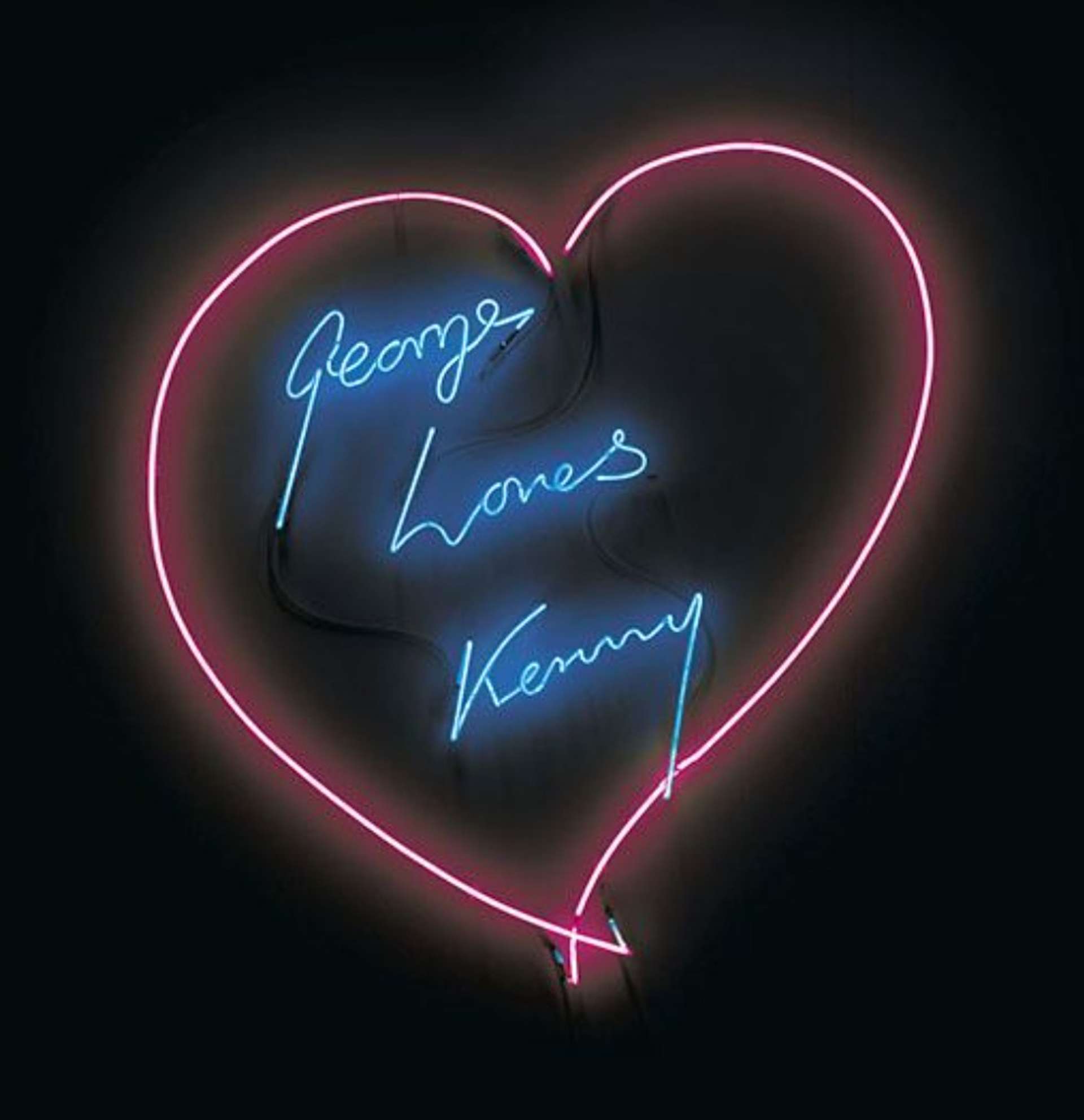 Unflinchingly honest and sometimes painfully intimate, Tracey Emin has always used her work to build emotive connections with her viewers. Her evocative story telling has been translated through a myriad of media throughout her career.

In the early 1990s, Emin began to experiment with neon lights. By bending them to form short, illuminated phrases in her distinctive handwriting, she created another body of work that is characteristically poignant. 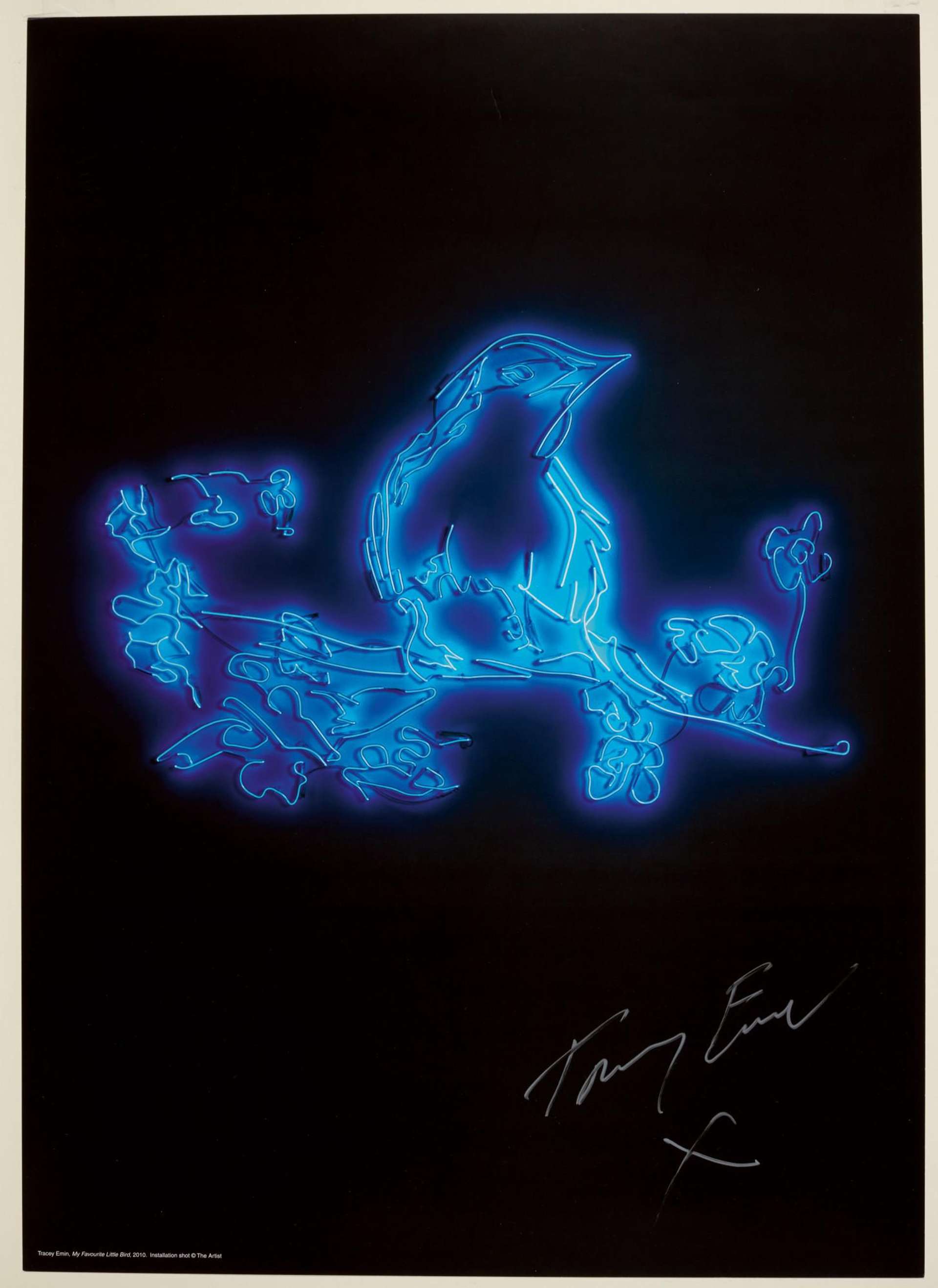 What are the neon works?

Whether it be on shop fronts, fairgrounds or hung on the walls of your local bar, neon lighting is an industrially produced medium we are all familiar with. Growing up in Margate, Emin herself was always surrounded by these neon shop signs in her seaside hometown. It is no surprise then, that this sentimental medium became a recurring focus in her confessional artwork. Emin subverts the traditional commercial use of neon lighting, bending the coloured lights to form distinctively poetic and personal expressions.

Captivated by the power of words, Emin often begins her creative process by writing. In the case of her neon works, she starts by penning a phrase that best captures the sentiment she is feeling at that moment. These handwritten notes are then passed onto a neon light manufacturer, who then twists the coloured light tubes to mimic her unique handwriting on a large scale. The preservation of Emin’s handwriting not only gives the neon works a spontaneous appeal but essentially transforms the neons into a self-portrait of sorts. The very fact that her written confessions might be switched off, and therefore lose their neon illumination, is testament to the fleeting nature of our emotions.

‘Neon is emotional for everybody, the neon and the argon gasses make us feel positive … Neon can help people who suffer from depression’ 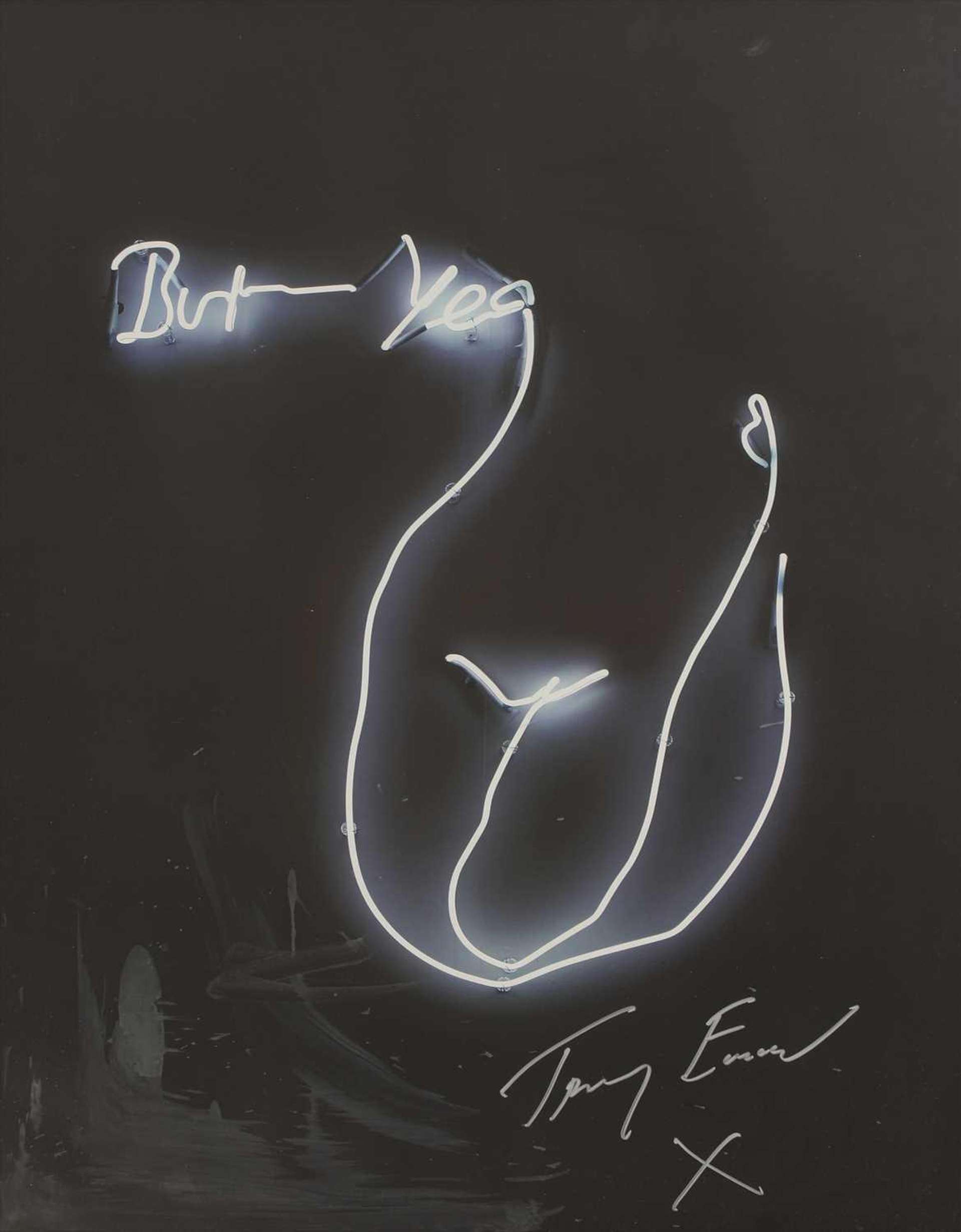 True to her typical confessional style, Emin’s neon works transform the artist’s personal experiences and emotions into stirring illuminations. For Emin, it is not only her poignant hand-written messages which are open to the viewer’s interpretation but the colour and light of the neons which has the power to shape their emotions. Emin herself has often spoken about her spirituality, and interest in ‘atmospheres, entities, feelings’. Through her atmospheric use of neon lights to illuminate public places, we see this spirituality enacted on a sometimes grand scale, as these works are as much about creating an emotive ambience as they are about conveying a readable message.

Emin’s neon work But Yea has a particularly visceral aura. Here, Emin reimagines her recurring motif of the female nude through the neons and seamlessly merges the outline of the figure with the scribbled and misspelt wording to the left of the piece. The work draws together Emin’s figurative style, inspired by Egon Schiele’s powerful handling of line, with her confessional and spiritual approach to the spontaneous written word. 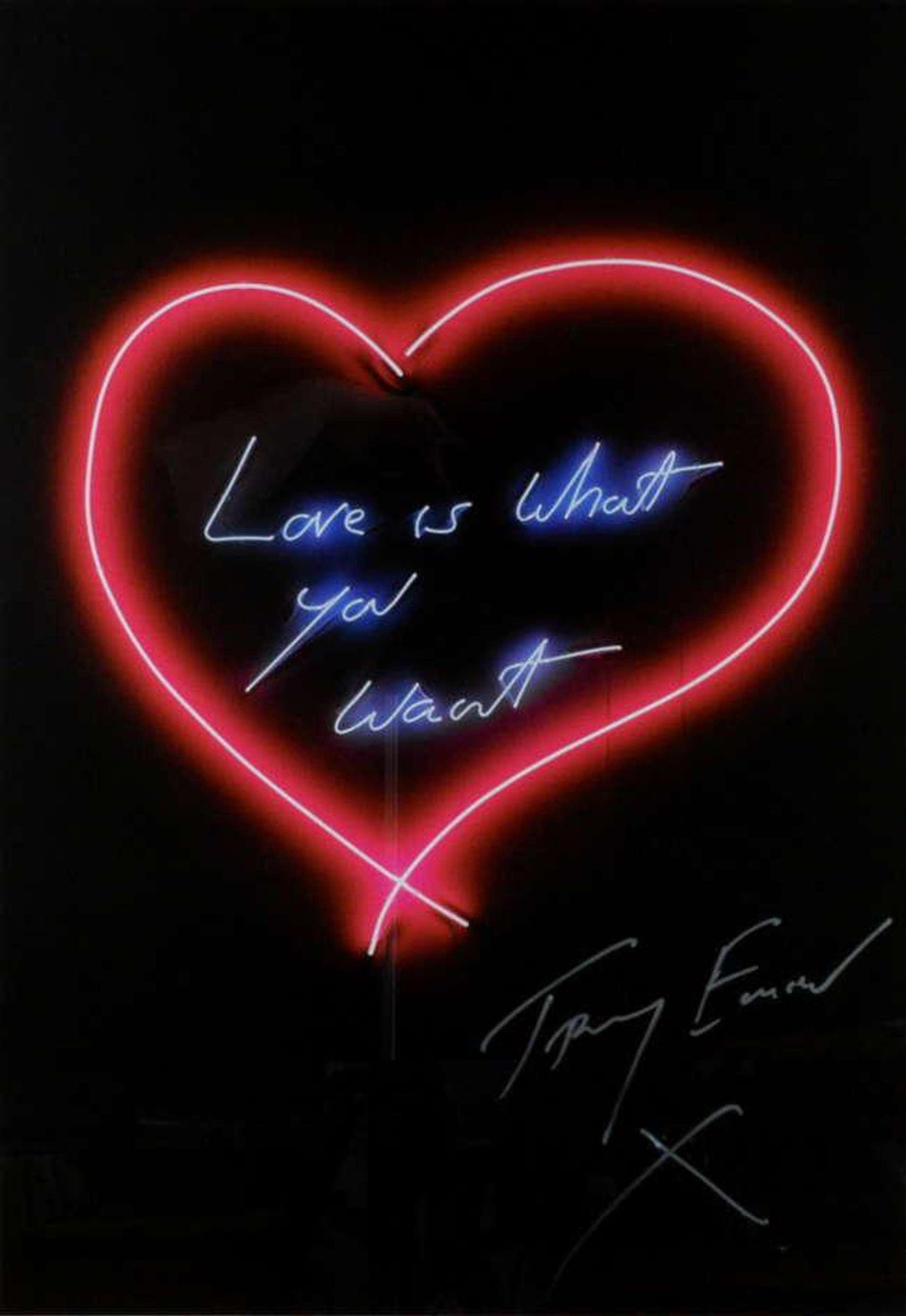 Since the 1990s, Emin has gradually built a mutually fruitful relationship with Miami’s Museum of Contemporary Art after they purchased her seminal video work Why I Never Became A Dancer in 1998. Over a decade later, this 2013 showcase was the first American museum exhibition dedicated to Emin, and the first to focus solely on her neon works. Titled ‘Tracey Emin: Angel Without You’, the exhibition quite literally highlighted the importance of writing, calligraphy and poetry in her work.

The exhibition was illuminated only by Emin’s neons and therefore cast the viewers in their colourful and emotionally-loaded glow. With phrases like Love Is What You Want, with their non-specificity on gender, Emin’s neon works are therefore universally readable and relatable. 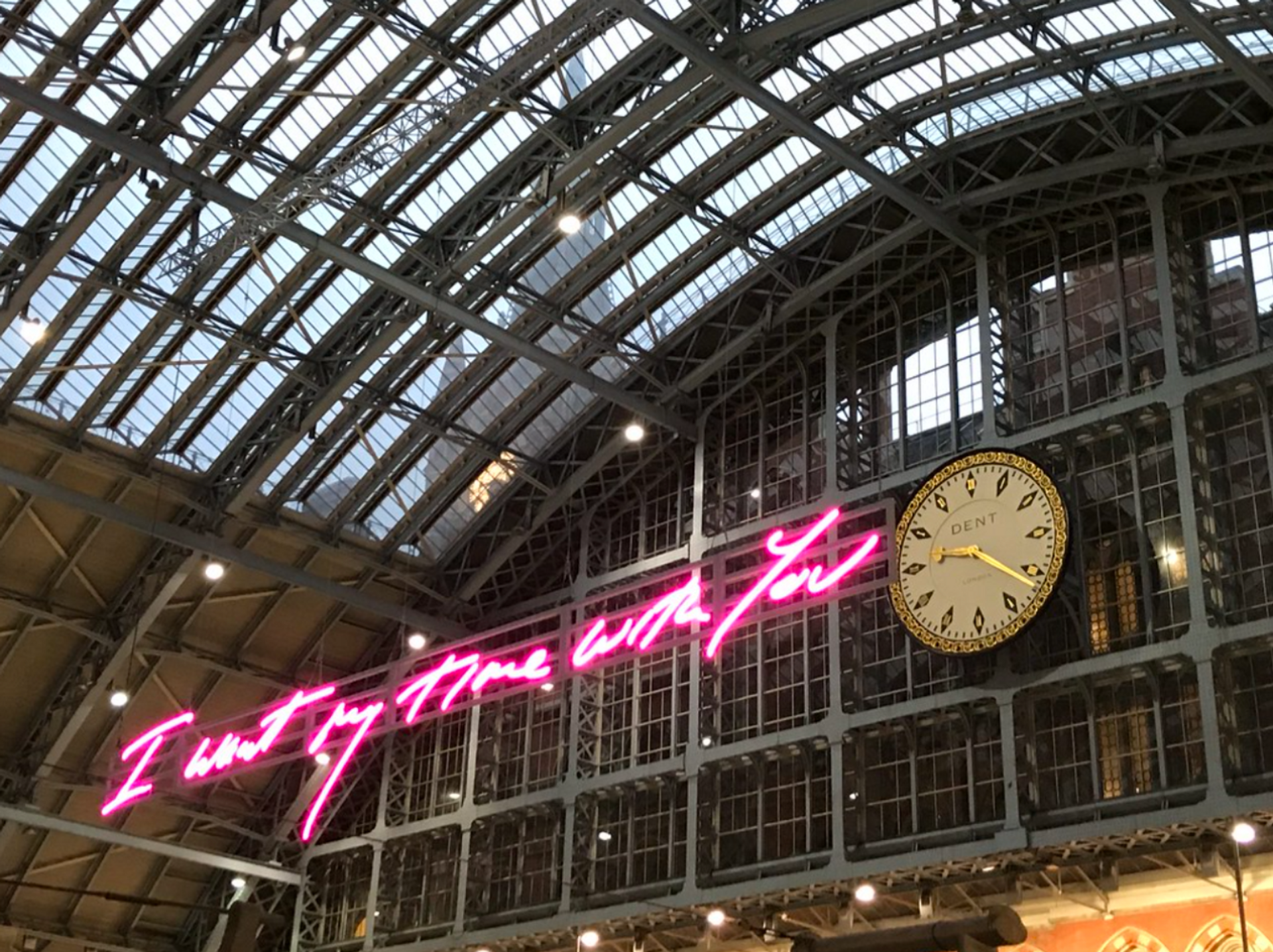 I Want My Time With You

Even though Emin’s neons certainly have a personal edge, she is not opposed to using the medium for grand public spectacles with an often political overtone. The universal readability of Emin’s neon works attracted a commission from St Pancras International in 2018, which contracted Emin to make her largest neon piece yet to celebrate the station’s 150th anniversary. With its poignant message of love and friendship, I Want My Time With You is about bringing people together, something facilitated by the station’s wide-reaching destinations. Installed two years after the UK voted to leave the European Union, this is not only a message of intimacy between friends but of love between borders after Brexit. Emin’s affectionate address to Europe, like the great neon work itself, is un-dimming and lasting. 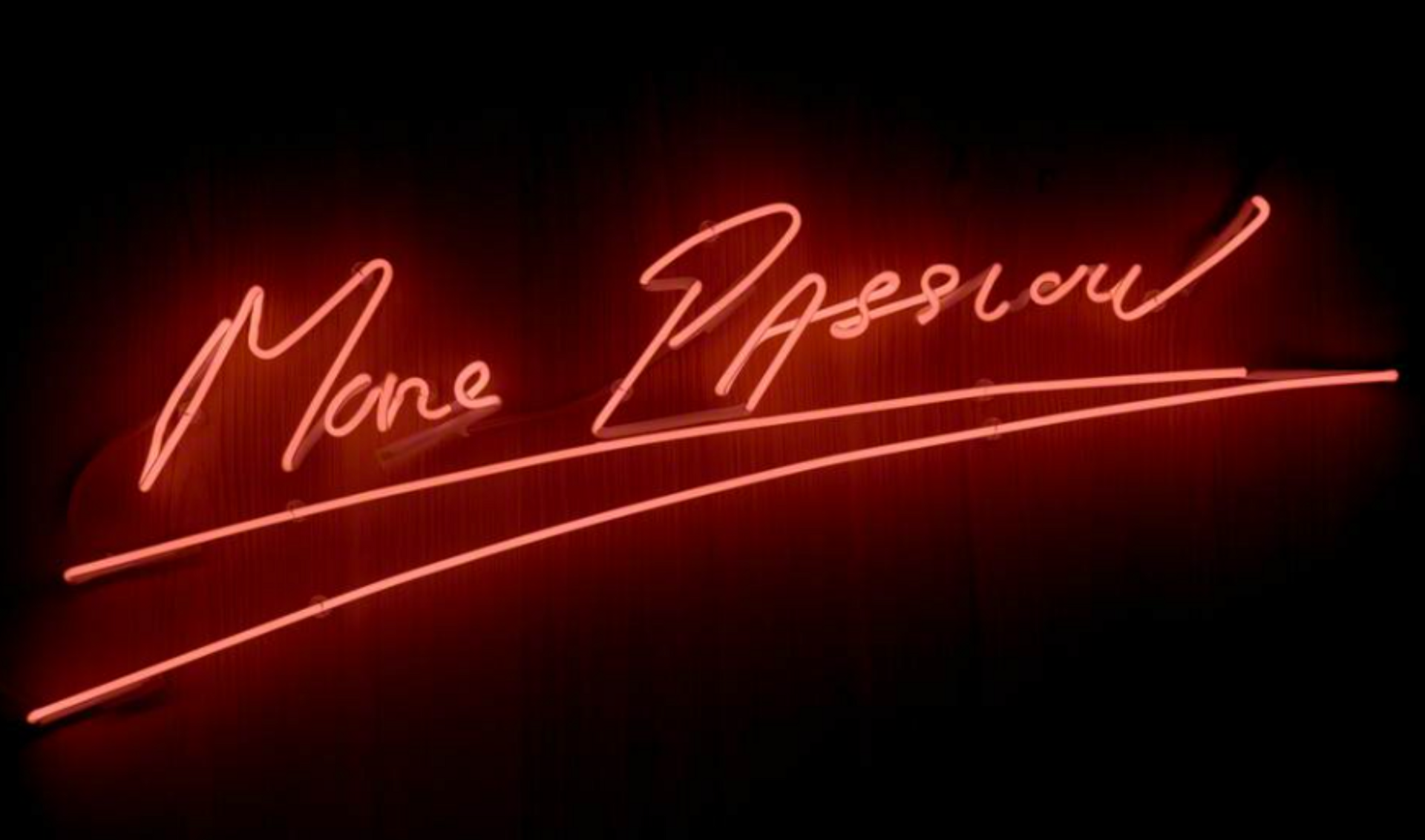 Made in 2010 and gifted to David Cameron and Nick Clegg’s Coalition Government in 2011, More Passion still resides in the Terracotta Room in Number 10 Downing Street. However, this work which once appealed for ‘more passion’ in British politics has recently been requested by Emin herself to be removed from Number 10. Outraged by what she called the Tory government’s ‘shameful’ misuse of power during national lockdowns, Emin has called for the work to be relocated. It is true that Boris Johnson and his Partygate pals are certainly not in need of ‘more passion’, but the controversy raises the question of how much control an artist can expect to have over their work once it is no longer officially theirs. It would appear that Emin’s moral plea via Instagram has since been heard, however, as the Government Art Collection has since begun discussions about the work's change of residency.

Browse Tracey Emin prints for sale or get a valuation here. 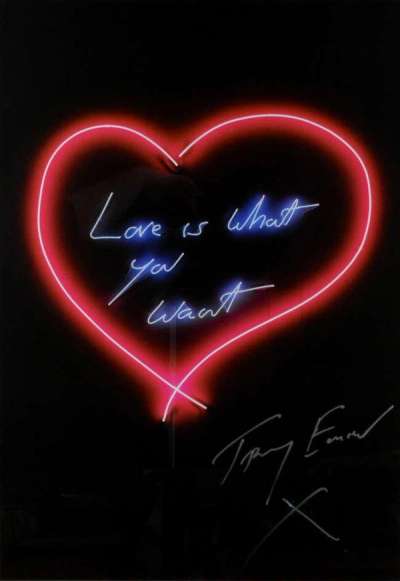 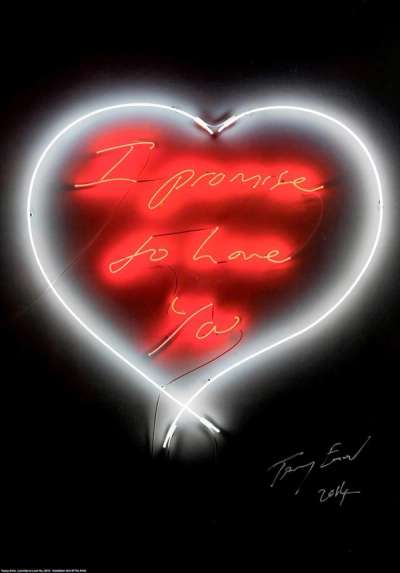 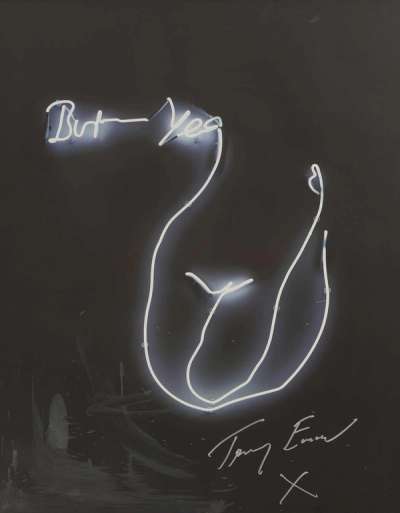 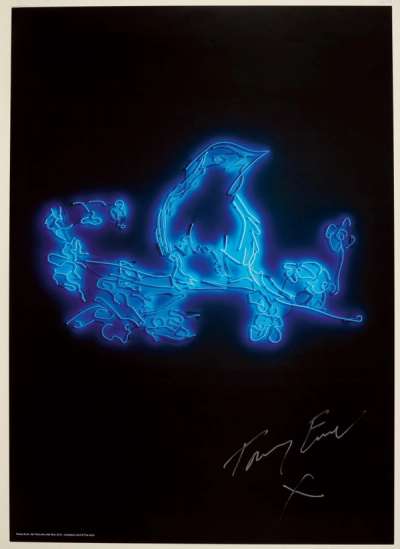 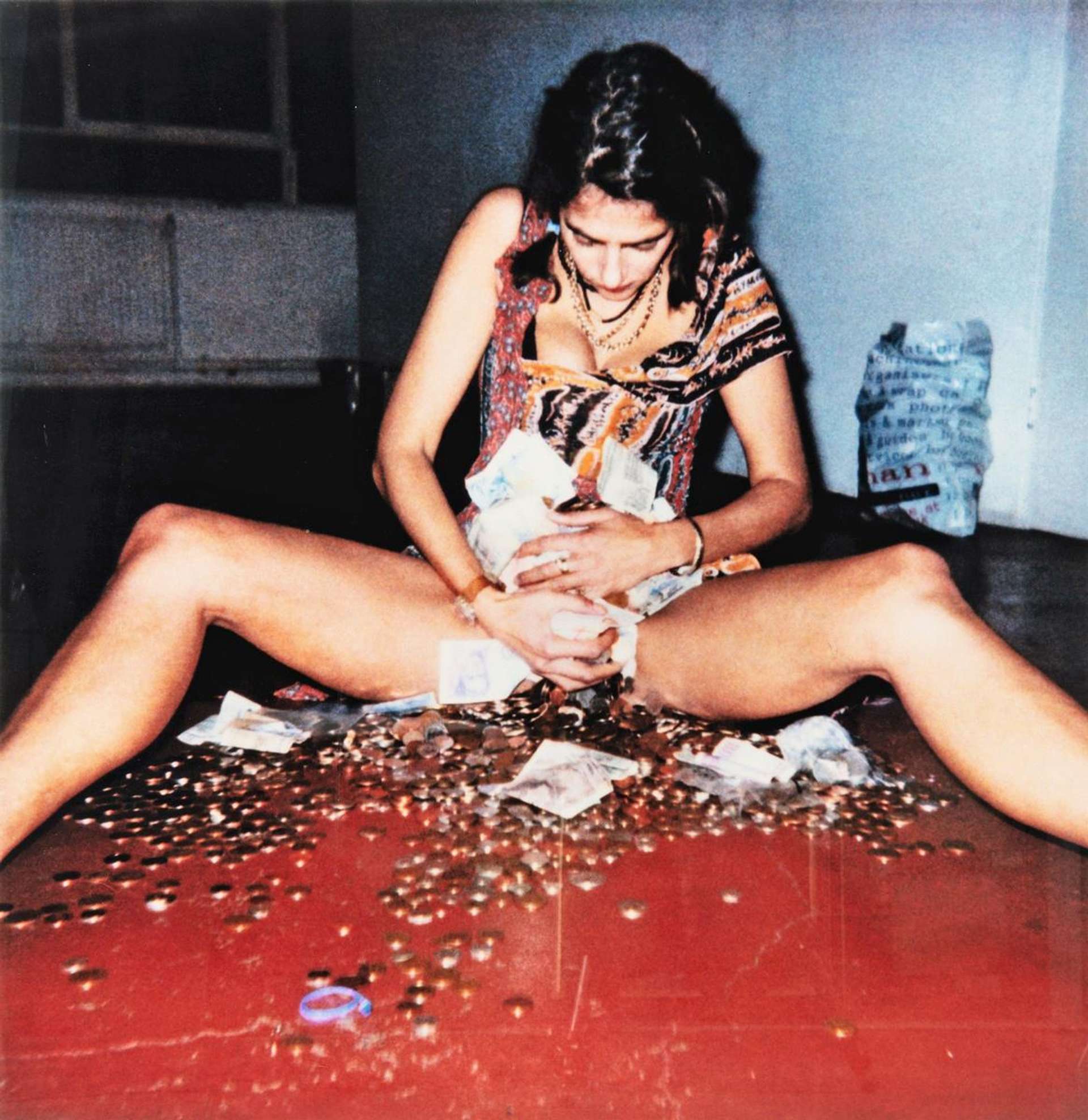 Under The Hammer: Top Prices Paid For Tracey Emin At Auction

Still achieving record prices today, Tracey Emin was one of the stars of the Young British Artists movement in the 1990s. Her artwork can sell for millions when it goes under the hammer, with even sma... 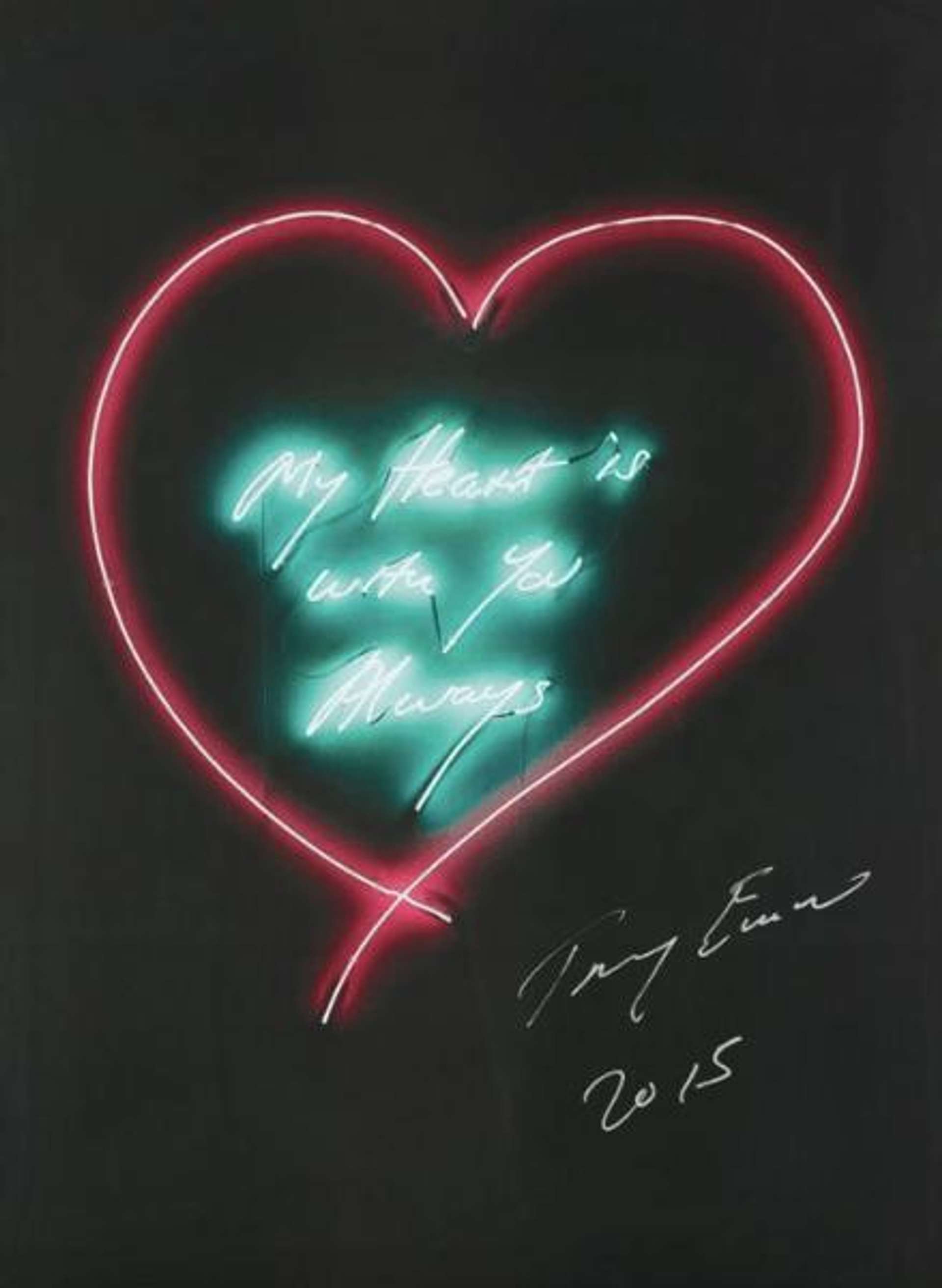 A Buyer’s Guide To Tracey Emin

If you are in the market to buy a Tracey Emin print, here are a few pieces of advice before you start your search, to make sure you find the right piece at the right price. Looking to sell an Emin pr... 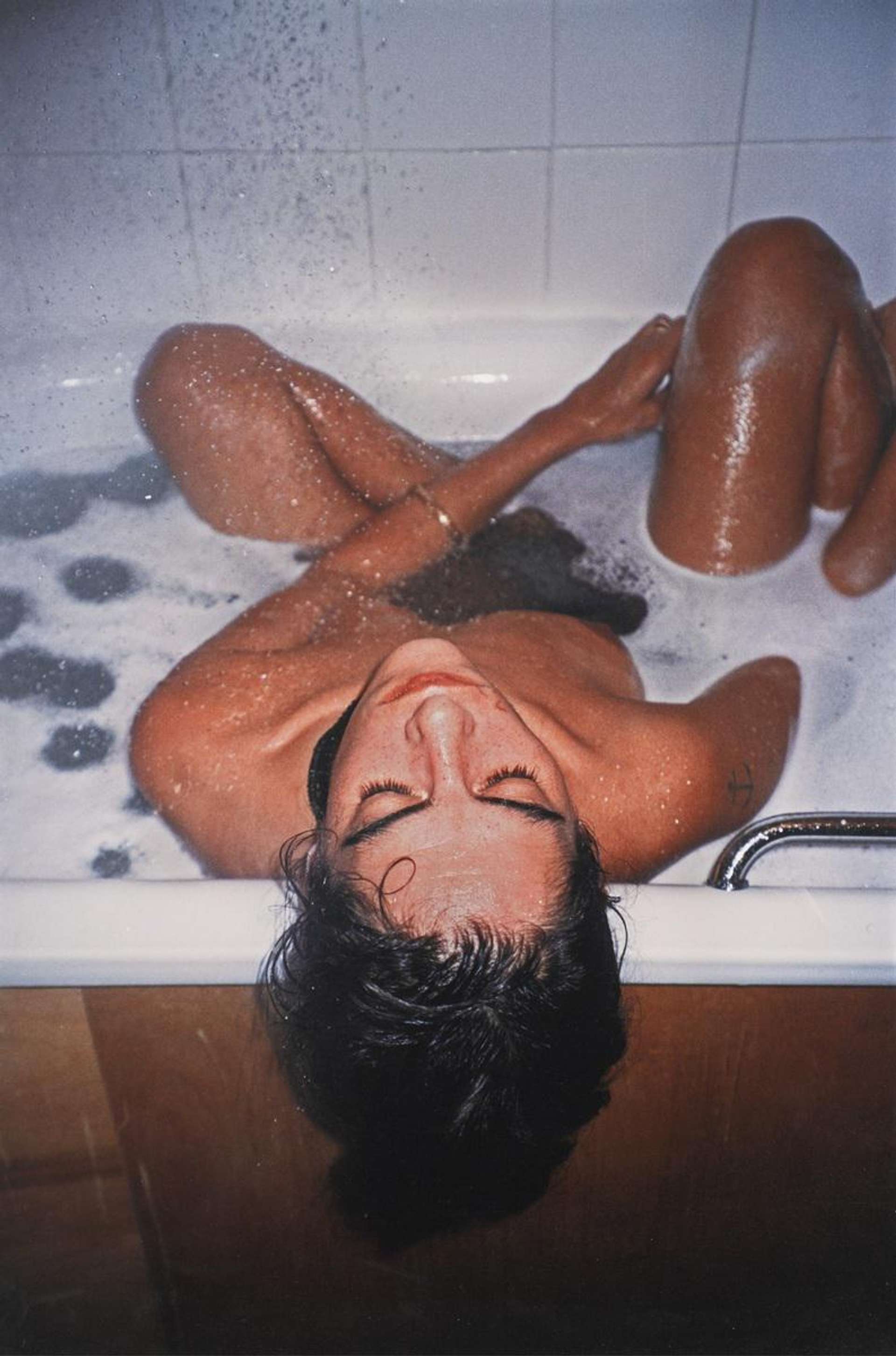 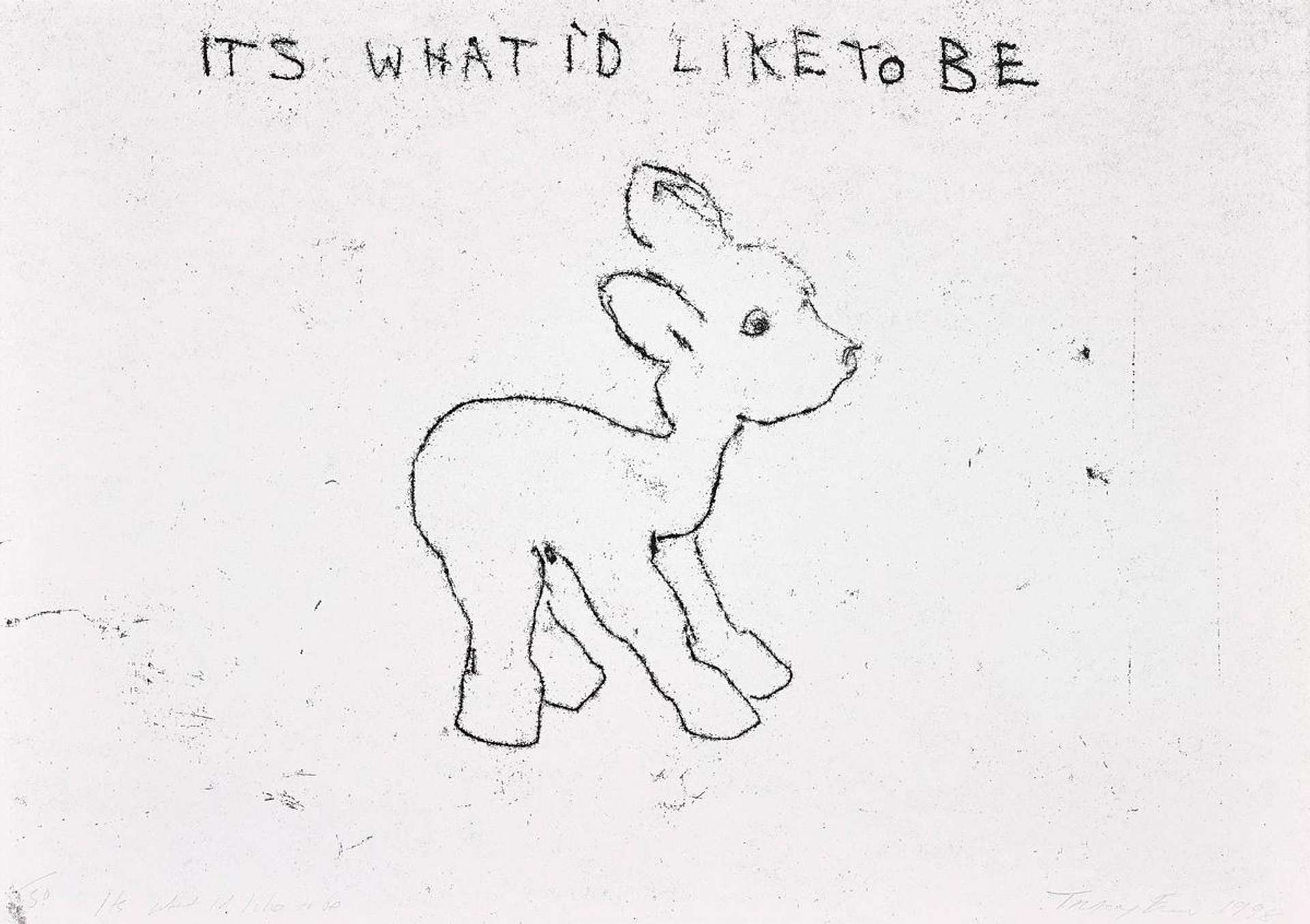 A Guide To Tracey Emin’s Prints And Drawings

Tracey Emin published her first lithograph in 1986. Since then, printmaking has been a key medium and a consistent presence in her oeuvre. Her monotype prints, taken from her diaristic drawings, are...