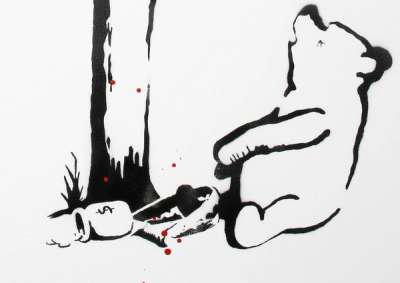 Banksy’s image of Winnie the Pooh first appeared stencilled on a wall in Banksy’s hometown of Bristol in 1999. This particular edition, sometimes referred to as Pooh Bear, was created in 2003 and is part of a series of 25 Winnie the Pooh canvas editions.

It belongs to Banksy’s earliest collection of works on canvas, first displayed at Santa’s Ghetto, an exhibition of paintings and prints by Banksy as well as works by Eine, Dface and Space Invader, which once opened every December in different locations around London. The second edition of Santa’s Ghetto, in 2003, took place in an abandoned store just off Carnaby Street and drew an international and star-studded crowd.

The second series of Winnie the Pooh canvas editions appeared in 2013 in New York, on the occasion of Banksy’s month-long street exhibition known as Better Out Than In. On day 13 of the show, the artist – disguised as a typical street vendor – set up a stand in Central Park where he sold black and white editions for just $60. With the artist’s identity concealed only eight of the works were sold.

The following day, in true Banksy style, the artist authenticated those canvases on his website declaring, ‘Yesterday I set up a stall in the park selling 100% authentic original signed Banksy canvases. For $60 each’.

The work represents English author Alan Alexander Milne's famous Winnie the Pooh character. Banksy’s rendition is based on Ernest Howard Shepard's original cuddly bear illustration and depicts Pooh as a stencilled black and white figure in spray paint on canvas. The much-loved bear is pictured weeping under a tree, his foot caught in a bear trap. In place of Pooh Bear’s famous honey pot is a pot of money, lying on the ground next to him.

Milne's famous teddy bear, known for his naivety and good nature, is a universal symbol of childhood innocence. Banksy's rendition is a depiction of the loss of that innocence, with Pooh’s honeypot transformed into a symbol of wealth and materialism.

Get Out While You Can (Placard Rat)