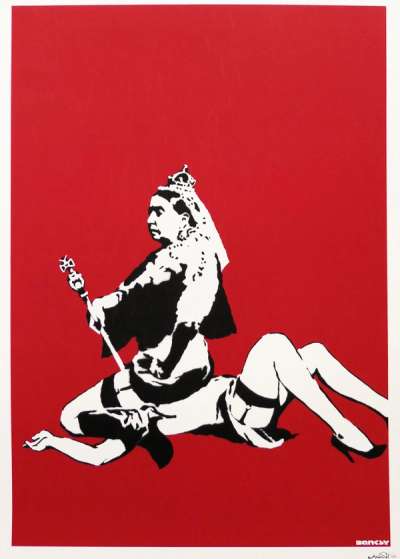 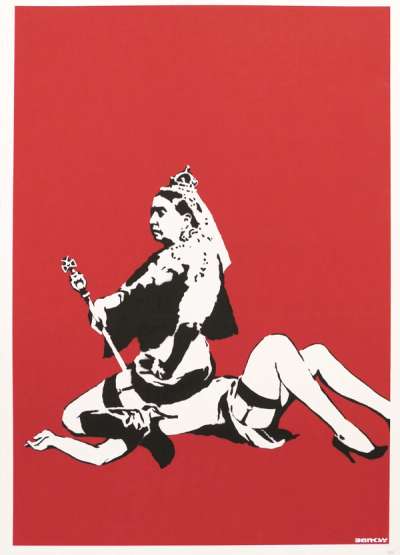 Banksy’s 2003 print Queen Victoria (Queen Vic) is one of the artist’s most controversial works, loaded with wit and anti-royalist sentiment. The work depicts the famously stern English monarch sitting on the face of another woman, in the middle of performing a sexual act known as ‘queening’. Pictures on Walls introduced the image with the instruction: “Show friends and colleagues your admiration for Britain’s greatest ever living monarch with this deluxe lesbian water sports fetish tableaux”.

Banksy is said to have taken inspiration from Queen Victoria’s assertion that women ‘were not able to be gay,’ which many speculate was the cause of the queen’s ignorance and the consequently continued legality of female homosexual relations. Others believe however, that Victoria made this statement to cover up her own sapphic tendencies, a theory that Banksy has exploited to powerful effect in this provocative print.

Both characters are realised in Banksy’s famous black and white stencil style against a regal red background. Queen Victoria is presented in full regalia with her crown and sceptre, with the unexpected addition of suspenders, knee-high leather boots and a short skirt that exposes her upper thigh. Her partner is also wearing suspenders and high heels, her arms thrown back in submission.

Well known for his criticism of the UK’s monarchy and government, Banksy consistently uses his satirical powers to criticise these establishments, just look at prints like Monkey Queen print, in which the artist depicts Queen Elizabeth II as a chimpanzee, and Turf War, which features Winston Churchill sporting a bright green mohican.

Have A Nice Day