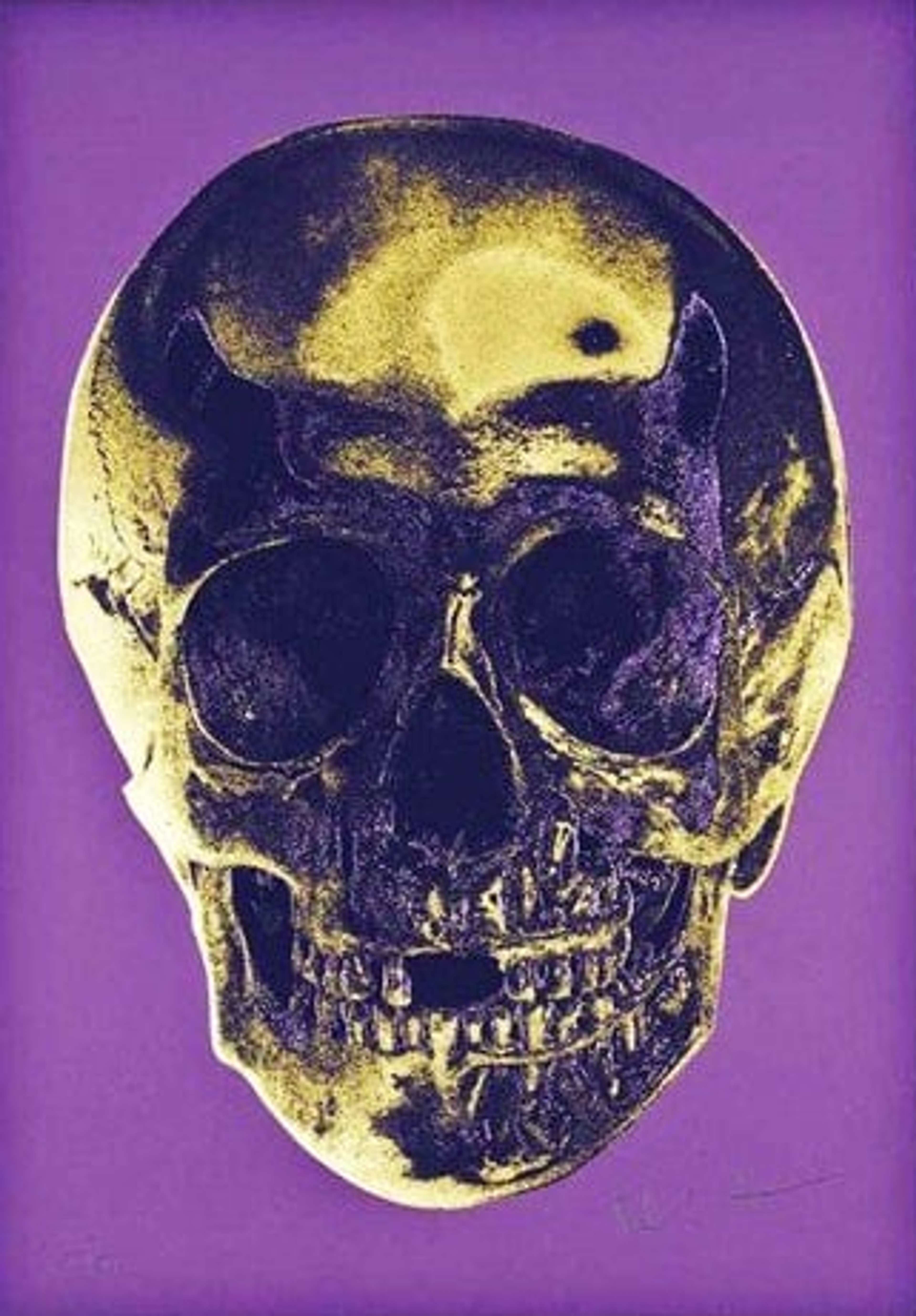 When it comes to deciding on which is Young British Artist Damien Hirst’s most famous work, the jury is very much out.

The controversial creator of all manner of striking – and shocking – art, Hirst runs the gamut of contemporary style, media, and method.

Long dubbed ‘the death guy’, the artist has consistently made headlines – and broken record sale prices – since his explosive emergence onto the UK art scene during the late 1980s.

In this article, we hone in on some key facts about Damien Hirst’s artwork and career by looking at 5 of his most famous artworks.

Bristol-born, Hirst grew up in Leeds during the 1960s and ‘70s. Not in the least bit academic, he struggled at school, and his art teacher begged for him to be allowed to progress onto sixth-form college so he could do his A-Levels.

Awarded an ‘E’ grade in Art — an achievement he jokingly referenced during his 1995 Turner Prize acceptance speech — Hirst later worked as a labourer in London, while continuing to make art independently. In 1986, and having been refused entry once before, Hirst began studying Fine Art at London’s Goldsmiths College.

In the well-known photographic work With Dead Head (1991), Hirst indexes his early interest in both art and death — themes he has returned to time and time again throughout his over 30 year-long career.

The work features a smiling young Hirst. He is seen placing his own head next to that of a corpse, severed from its body and wrapped in what appears to be a shroud.

But how did he get the photo? From the age of 16, Hirst would visit the anatomy department of Leeds Medical School, and worked part-time in a morgue.

Hirst found and enlarged the photograph in 1991 — a year which saw him hold his first two solo exhibitions in London. These were entitled In And Out of Love and Internal Affairs, and were held at the Woodstock Street Gallery and Institute of Contemporary Art (ICA) respectively.

Although not quite as well-known as his larger-scale works, With Dead Head sticks firmly in the minds of all those who have seen it, and represents Hirst at his subversive best.

"The Physical Impossibility of Death in the Mind of Someone Living (1991) © Damien Hirst" by dou_ble_you is licensed under CC BY-ND 2.0.
2.

The Physical Impossibility Of Death In The Mind Of Someone Living (1991) is certainly one of Hirst’s most famous works, if not the most famous.

A large-scale installation first exhibited at London’s Saatchi Gallery, it cost around £50,000 to make.

Comprising a Great White shark encased in a translucent vitrine or tank, itself filled with the preservative formaldehyde, the work is an icon of both the Young British Artist and Britart movements.

Once again, it’s all about death.

Hirst explains: ‘The fear of this shark is an unreasonable fear but it’s a good way to tap into that fear of death, which is a reasonable fear.’

A commission for gallerist and YBA patron, Charles Saatchi, the work was sold for around US$12 million in 2004.

The work’s importance is not a product of its hefty price tag, however.

Together with the grotesque installation piece A Thousand Years (1990), which consists of a rotting cow’s head, ‘insectocutor’ lamp, and thousands of live flies, all placed in a hermetically sealed tank, the installation marks Hirst’s steadfast adoption of scale and ‘conceptual’ art techniques.

Following on from his standout installation works, A Thousand Years and The Physical Impossibility Of Death In The Mind Of Someone Living, Mother And Child (Divided) (1993) is a large-scale vitrine-based piece. It features a cow and its calf, each cut in half and preserved in formaldehyde solution.

With each half placed inside its own tank, gallery visitors can walk between the bisected bovines to inspect the intricacies of their insides. When the piece was first shown at the 1993 Venice Biennale, it enraged animal rights groups, and has continued to make headlines with each exhibition.

It has been said that one of Hirst’s key inspirations for the installation was in fact the work of Irish-born artist Francis Bacon, who just a few months before his death in 1992 had allegedly spent a full hour transfixed by Hirst’s A Thousand Years.

The work’s raw, visceral treatment of animal flesh certainly recalls that present in many of Bacon’s paintings, including Second Version Of ‘Painting’ 1946 (1971) and his later evocations of bullfights. Hirst’s love for Bacon is also well documented: in 2006, the artist constructed an installation-based tribute to Bacon with another work, The Tranquility Of Solitude (For George Dyer).

Yet despite its crossover with Bacon and compositional similarities to the work of American ‘king of kitsch’ Jeff Koons, who worked with tanks for his Equilibrium series, the piece’s real subject matter is in fact religion and Christian art.

A subversive take on the Madonna and Child — a canonical art historical and religious reference point — the piece references both Hirst’s Catholic upbringing, and his three-dimensional subversion of two-dimensional, painterly artistic tradition.

Commenting on his fraught relationship with painting, and love of installations, Hirst once said: ‘I gave up painting at 16. I secretly thought I would have been Rembrandt by then’.

An allegorical artwork for the 21st century, Lullaby Spring is one of Hirst’s most famous.

Indebted to his early, now iconic work Medicine Cabinets (1988), made using empty medication packets gifted by his grandmother, and the large-scale installation Pharmacy (1992), it melds Hirst’s conceptual art sensibilities with his deep love of colour and fascination for pharmaceuticals.

Comprising a polychromatic arrangement of painted cast pills, each meticulously arranged inside a stainless steel cabinet, Lullaby Spring speaks to the passing of the seasons and the inevitability of death.

In more ways than one, it marks a significant milestone in Hirst’s stylistic development.

As a student at Goldsmiths, Hirst first began to dabble with colour. One of Damien Hirst’s first artworks was the little-known installation 8 Pans (1987): a work consisting of 8 brightly coloured saucepans hung laterally. A year later, the artist made the assemblagist piece Boxes (1988), which would go on to influence his world-famous Spot paintings – an endless series of works each named after a chemical reagent. These two works were exhibited at the highly influential 1988 Sensation exhibition.

Marrying colour, chemicals, and a conceptual art philosophy, Lullaby Spring brings together three important strands of Hirst’s œuvre in what can be seen as a developmental high point in his career.

Moreover, the work is one of Hirst’s most expensive. In June 2007, the piece realised a record price of £9.6 million when it went under the hammer at auction. The sale established Hirst as Europe’s most expensive living artist at that time.

‘I started trying to find out what all the drugs were. In the end, coming from that background of colour arranging, I can't resist doing it in terms of colour. Everything is done in terms of colour and what it looks like.’
For The Love Of God, The Diamond Skull © Damien Hirst 2007
5.

In 2007, Hirst produced another of his most famous pieces: costing a total of £12 million to produce, For The Love Of God is a platinum cast of an 18th-century human skull encrusted with diamonds.

But why diamonds? Well, despite their material ‘value’ — an attribute of art that Hirst has been quick to play with, taking conceptual inspiration from art fabricator-in-chief Andy Warhol — diamonds are, according to Hirst, the ultimate antidote to death.

‘Every artwork that’s ever interested me is about death. I thought, well what’s the maximum you could pit against death, and diamonds came to mind’

Manufactured by diamond specialists and Fabergé experts, Bentley & Skinner, the work’s title came from Hirst’s mother, who would exclaim the phrase ‘For the love of God’ whenever a young Hirst had what he called ‘crazy ideas’.

Browse our Damien Hirst prints for sale or get a valuation here.

The Currency series is Damien Hirst’s first venture into the NFT market, published by HENI Editions in 2021. Always one to shock, Hirst’s NFT project throws up questions of value through the subject...
Damien Hirst