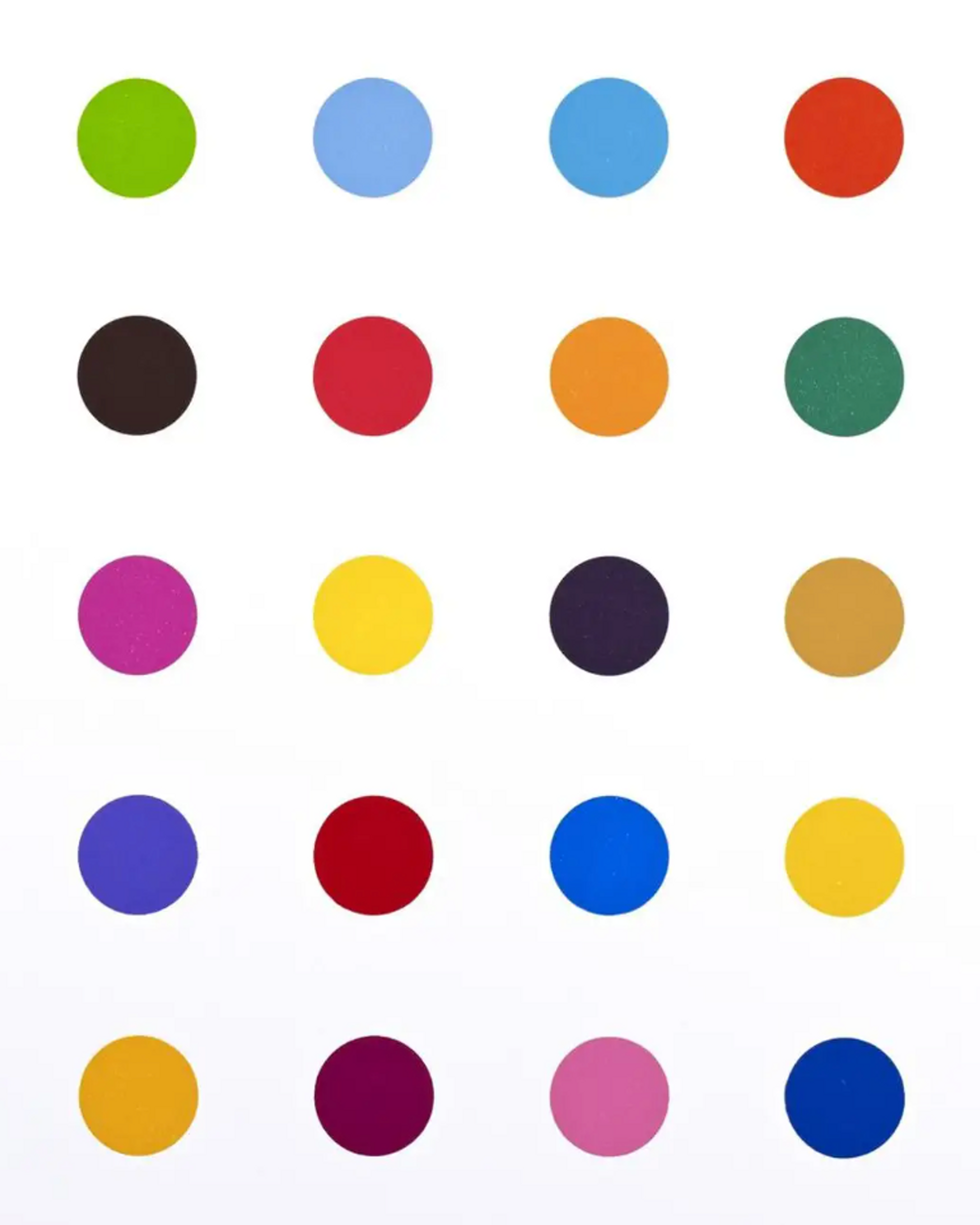 Damien Hirst, leader of the Young British Artists in the 1990s, is one of the most infamous artists of his generation. His record prices on the secondary market reached a high in 2007-08 and Hirst prints continue to retain their value. One of his most succesful moments at auction was seen as recently as 2018, with the historic Beautiful Inside My Head Forever sale.

Here we take a look at some of Hirst’s top works under the hammer:

Animals suspended in formaldehyde solution are among Hirst’s best-known early works and the artist offered a small menagerie of pickled creatures in his auction with Sotheby’s, Damien Hirst – Beautiful Inside My Head Forever (Evening Sale) on 15 September 2018 in London.

Considered Hirst‘s most expensive work for its value in dollars ($19,200,000 million), Lullaby Spring – a steel and glass cabinet holding 6,136 individually painted pills – achieved over three times its £3,000,000-4,000,000 estimate when it sold at Sotheby’s Contemporary Evening Auction in London on 21 June 2007. At £9,600,000, it set a new auction record price for Hirst and established him as Europe’s most expensive living artist at the time.

Lullaby Spring is one in a series of four pill cabinets known as Lullaby, The Seasons. Christie’s had sold Lullaby Winter in their New York auction in May 2007 for $7,432,000, or £3,700,000, although the buyer never paid. Just over a month later, Lullaby Spring increased the value of Hirst’s pill cabinets by $12,000,000 when it was offered at Sotheby’s.

The second-highest lot on Sotheby’s dedicated Hirst auction on 15 September 2008, The Kingdom presented a tiger shark in a black vitrine. Hirst’s most famous tiger shark sculpture, The Physical Impossibility of Death In The Mind Of Someone Living, made headlines in 2005 when art collector and patron Charles Saatchi privately sold the work to an American buyer for nearly £7,000,000.

Standing over 2m tall and almost 5m wide, The Void is the largest of Hirst’s pill cabinets and also one of the first he ever made. The work was purchased from Gagosian Gallery in 2000 and kept in the same collection for almost two decades before the owner offered it in Phillips’s 20th Century & Contemporary Art Evening Sale in New York on 18 May 2017.

£5.2M for Fragments Of Paradise

Another top lot from Sotheby’s dedicated Hirst auction on 15 September 2008, Fragments of Paradise was one of the first in Hirst’s new series of cabinets, this time displaying diamonds instead of pills. Estimated at £1,000,000-1,500,000, the new work went on to achieve five times higher.

“The amazing thing about diamonds is that they take light and throw it back at you,” Hirst had said, adding, “but they have a dark side as well.” Between 2008-11, Hirst made 14 gemstone cabinets displaying diamonds or sapphires, but none have topped Fragments of Paradise on the secondary market.

But the buyer never paid after the sale and, having guaranteed the work, Christie’s was forced to keep Lullaby Winter themselves. Almost eight years later, Christie’s offered Lullaby Winter in their Post-War & Contemporary Art Evening Auction on 11 February 2015. There, the artwork sold for £3,000,000.

On 14 February 2008, Sotheby’s teamed up with U2 lead singer Bono and Damien Hirst to launch the auction house’s first (RED) charity auction. Curated by Hirst, the evening sale offered 72 lots themed around the colour red – by the end of the night, 17 new auction records were set and US$42,000,000 was raised to fight against AIDS. The top lot was Hirst’s Where There’s A Will, There’s A Way, one of seven works the artist donated to the sale, which achieved US$7,100,000.

This important lamb sculpture from 1994, one of Hirst’s first formaldehyde artworks, was snapped up after 30 seconds of bidding at Christie’s Post-War and Contemporary Art Evening Sale in New York on 17 May 2018. Four editions of Away from the Flock were made in 1994 – other versions are now in the collection of Tate Britain and in The Broad, Los Angeles.

Endless dots and colour combinations - Damien Hirst’s Spot Paintings are a defining feature of the controversial artist’s career. But how many spot paintings are there exactly? Hirst estimates to ha...
Damien Hirst

Numerous exhibitions have showcased Damien Hirst’s ground-breaking and provocative works since the artist’s rise to fame in the 1990s, and he is arguably one of the best-known living artists today. Wo...