David Hockney, Technology and Perspective: Ways of Seeing in the 21st Century David Hockney paintings are a masterclass on perspective. The painter has always placed the examination of different ways of ‘seeing’ at the heart of his artistic practice.

From his first experimentations with the camera obscura and camera lucida through to his iPad paintings, technology has aided much of Hockney’s long standing engagement with human perception.

This spring and summer, Hockney’s use of technology is the subject of a ground-breaking exhibition, Hockney’s Eye, being held at both The Fitzwilliam Museum and The Heong Gallery in Cambridge. A dramatic encounter with the likes of Andy Warhol, Claude Monet, and John Constable, Hockney’s tradition-breaking artworks are shown alongside those of the art historical canon to which they refer.

What makes the exhibition unique? It is the first to explore pictures and picture-making through Hockney’s eyes, and features portraits, landscapes, differing perspectives on perspective, and a real-life camera obscura.

Here we have an overview of Hockney’s use of technology throughout his career.

What technology does David Hockney use to create his work?

Throughout his long and fruitful career as an artist, Yorkshire-born Hockney has embraced a wide variety of analogue and digital technologies, using them as means to stretch the sensory and creative potential of his most important asset: his eye. 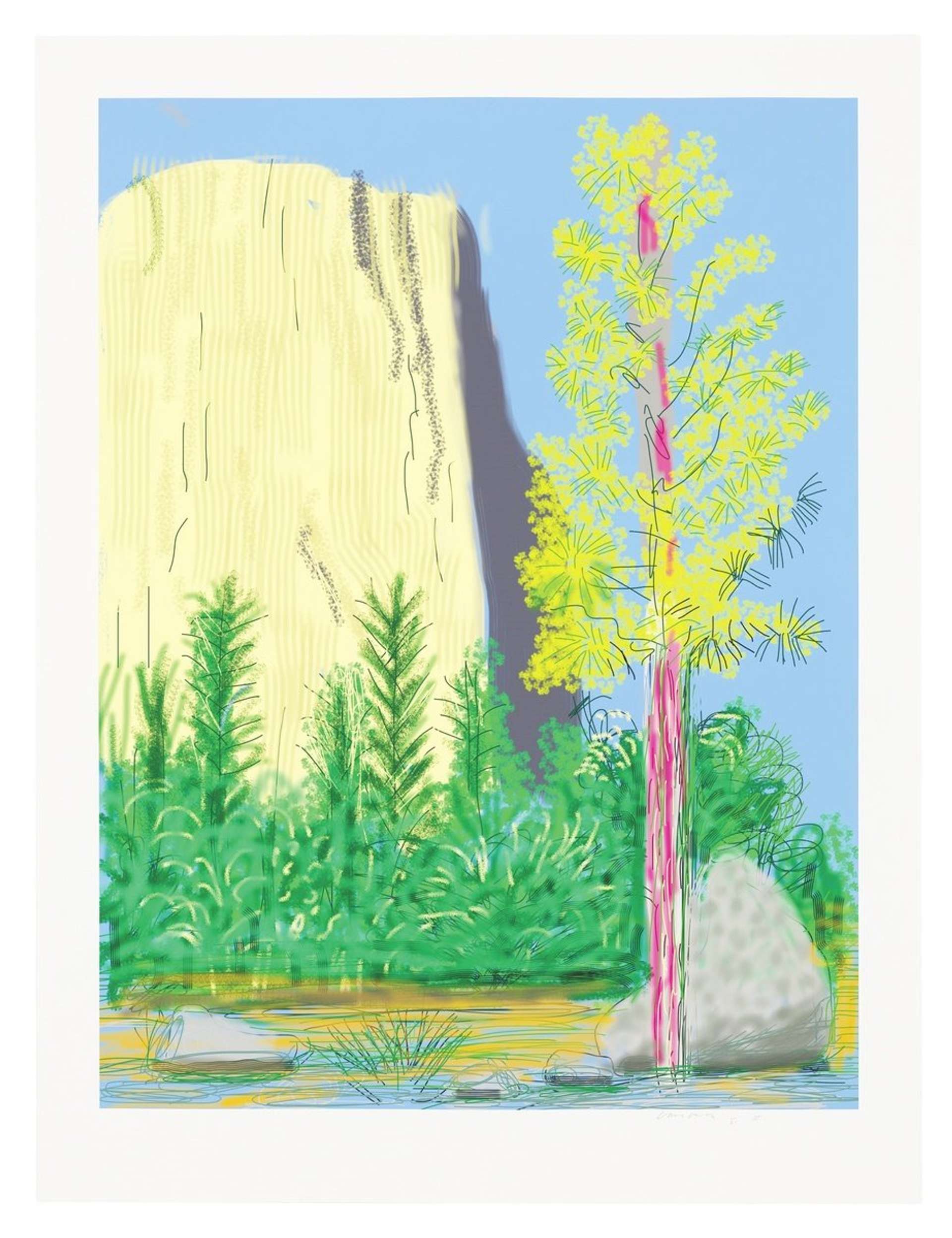 The camera and David Hockney

In 1964, attracted by the glamour of Hollywood and having had enough of London, Hockney moved his home and studio to Santa Monica, California. He compared his relocation to that of Van Gogh in 1888, from Paris to Arles.

The United States brought more than just cheap drinks and abundant sunlight: it introduced Hockney to the Polaroid camera.

The artist had used photography before; but traditional photographs ‘didn’t really have life in the way a drawing or painting did’, he argued. In the 1980s, Hockney began to use the Polaroid to create photo collages he named ‘joiners’.

Circumventing traditional optic rules and capturing a multitude of different perspectives at once, Hockney used the Polaroid to create the Composite Polaroid (1982) and Photo Collage series (1983), each comprising standout examples of these ‘joiner’ artworks. 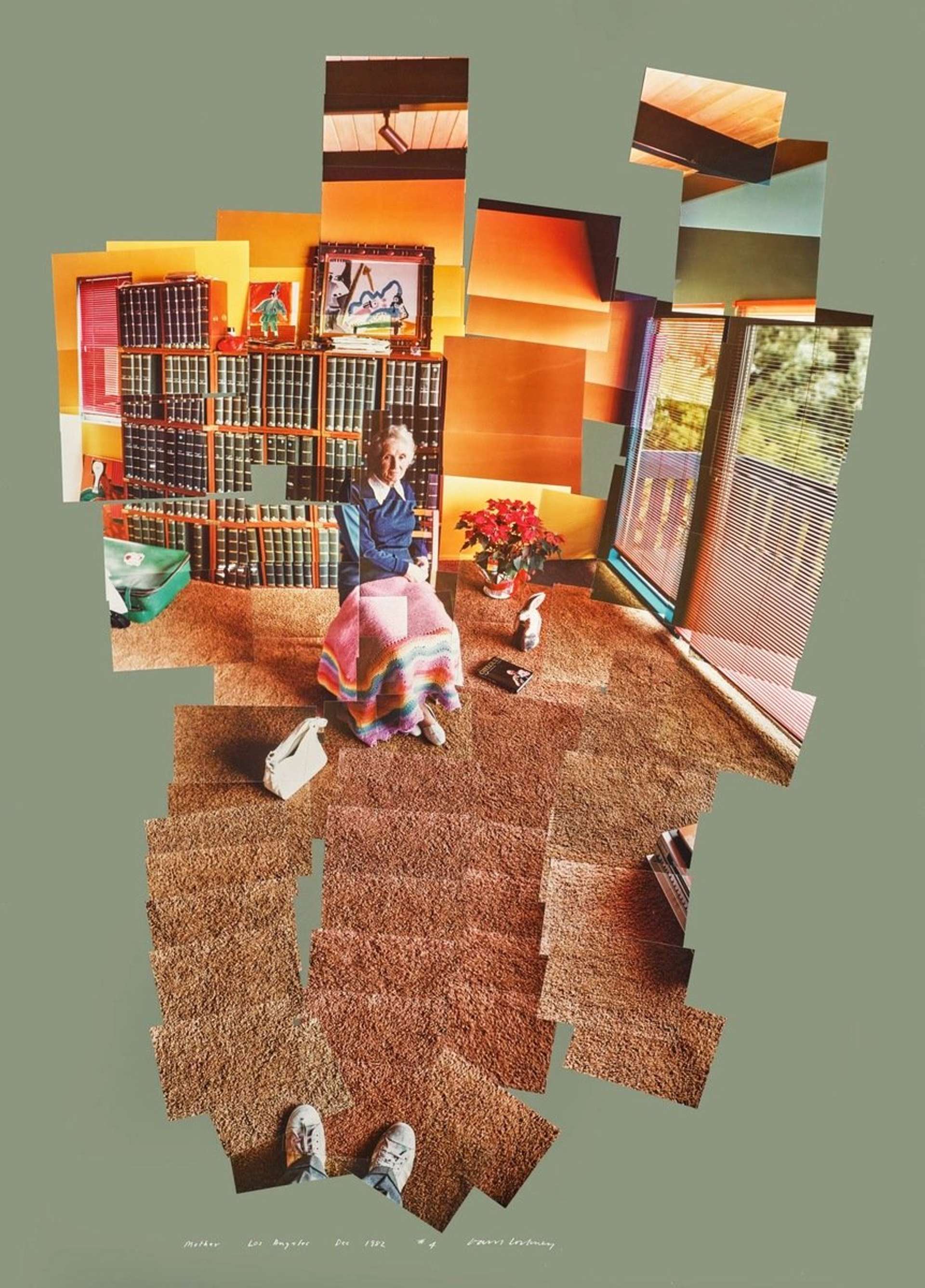 Hockney's use of Quantel Paintbox and Xerox

By 1986, Hockney began to experiment with the Quantel Paintbox: a computer graphics workstation used in television and graphics studios. Commenting on the Paintbox, Hockney once said: ‘I’m painting with light on glass. The only equivalent where you would get colours like this is stained glass’.

Shortly afterwards, Hockney turned to the Xerox photocopying machine, which he used to create his Home Made Prints series. 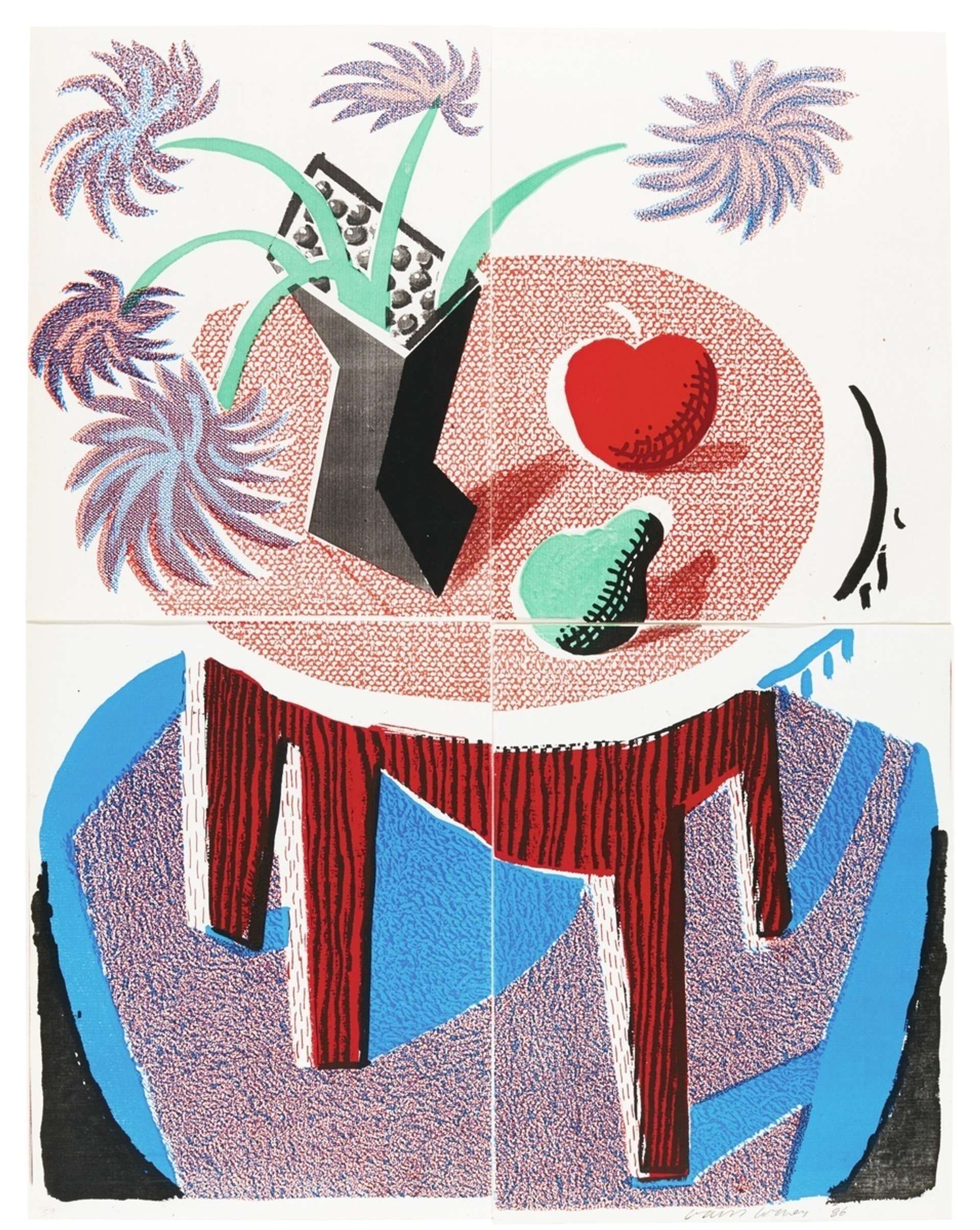 Flowers and Apples from the Homemade Prints Series © David Hockney 1986

The Camera Obscura and Camera Lucida: Hockney and the Old Masters

In his 2001 book Secret Knowledge: Rediscovering the lost techniques of the Old Masters (2001), Hockney published a bold claim. Western art, he argued, had been dependent on technology for over 400 years. This dependence, Hockney argued, sprouted a ‘camera culture’ that existed long before the invention of photography.

In his own words, Hockney once said that his idea ‘all started with a hunch’. Or, more precisely, during a visit to London’s National Gallery in 1999.

Whilst looking at drawings that French neo-classical painter Jean Auguste-Dominique Ingres made of English tourists, on their way to Rome for the Grand Tour, Hockney was amazed by their accuracy and extremely small scale. He quickly became convinced that Ingres had traced them, and had used technology to do so.

When an artist sits down to draw a portrait of a sitter, Hockney argued, they do something called ‘eyeballing’. This describes their combined use of their hand – and eye – to attempt to recreate likeness, and be ‘true to life’ as they see it. Hockney was convinced that when making these images, Ingres had not used this apparently universal technique.

In 2000, Hockney took his ideas further and began to create what he dubbed The Great Wall: a huge assortment of images charting the development of Western art. The Wall ran from ‘pre-optic’ 12th-century Byzantine mosaics all the way up to the 19th century, with works by Vincent van Gogh.

Later, with the help of physicist Charles M. Falco, Hockney revised his thinking. Falco argued that the use of concave mirrors by 15th-century painters like Dutch Master Jan van Eyck were evidence that artists had been using optical devices well before the Renaissance, and as early as 1420.

The pair worked through their ideas together, developing what went on to be named The Hockney-Falco Thesis. This thesis argues that advances in both accuracy and realism since the Renaissance were the direct result of optical instruments, such as the camera lucida: an optical lens that reflects a detailed view of a subject into the eye.

Hockney did not stop at theory. He wanted to know exactly what it was like for the Old Masters when they used these optical technologies.

In 2000, Hockney bought a camera lucida and used it to make a series of over 2000 drawings, which he named his Camera Lucida Drawings. This series portraits of friends, such as Don Bachardy (Don Bachardy. Los Angeles, 28th July 1999), and even the security guards at the National Gallery (12 Portraits After Ingres In A Uniform Style, 1999-2000). 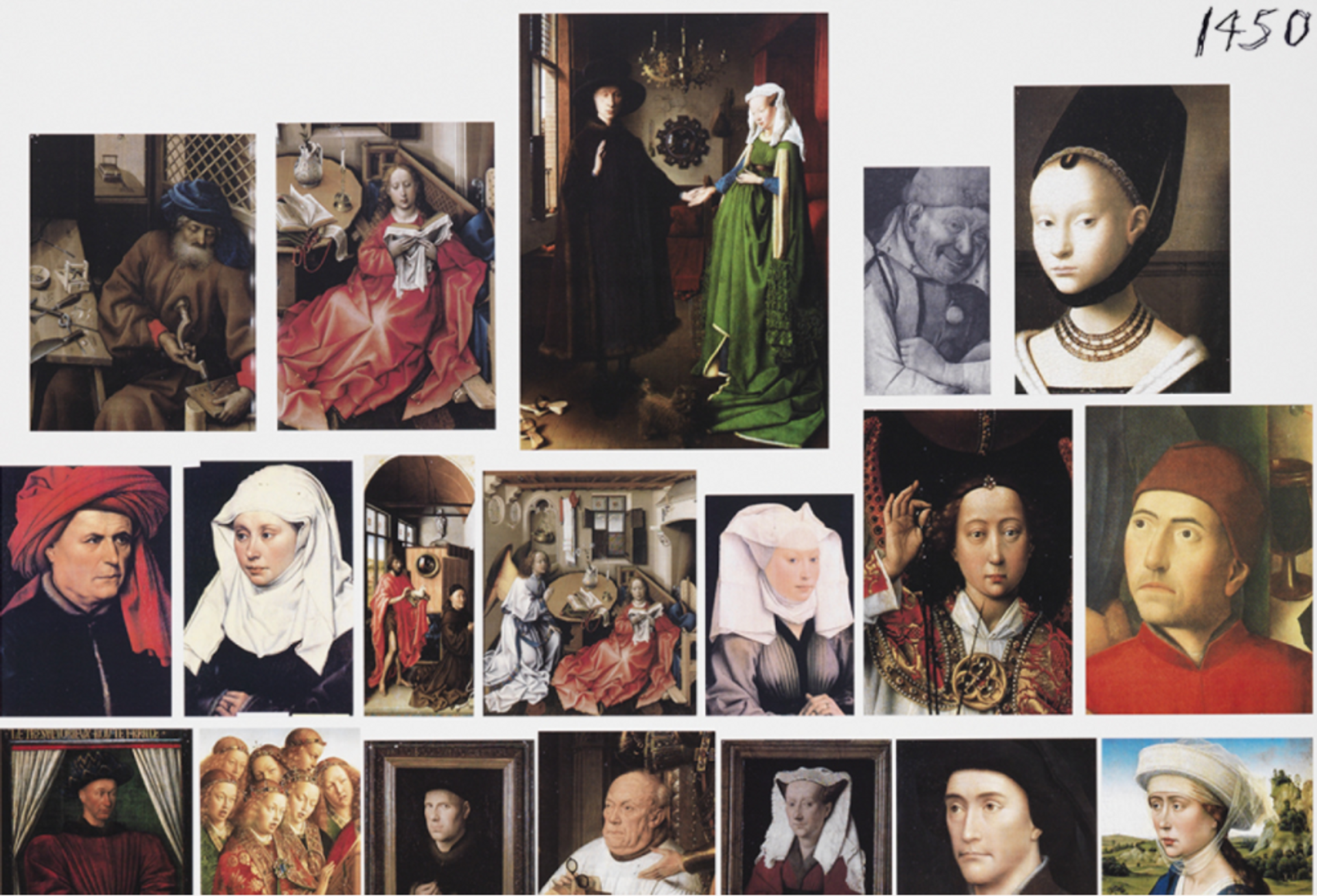 Hockney and the iPad

12 years ago, Hockney attracted worldwide attention for his use of a technology many of us use every day: the smartphone.

Using the Brushes app, Hockney began to make images with his thumbs.

In 2010, Apple released the first iPad and Hockney’s image-making technique was transformed once again. Using a stylus, Hockney used the iPad to create striking compositions in bold colours. With the iPad Hockney created his world-famous series, The Yosemite Suite. Despite its two-dimensionality, this new medium allowed Hockney to depict the texture and depth of the natural world. The Digital Drawings series was also created with the iPad.

Commenting on this technological turning-point in his career, Hockney once said, ‘There was great advantage in this medium because it’s backlit and I could draw in the dark. I didn’t ever have to get out of bed’.

In 2020, Hockney published his iPhone and iPad drawings in a limited edition book, My Window, published by Taschen. 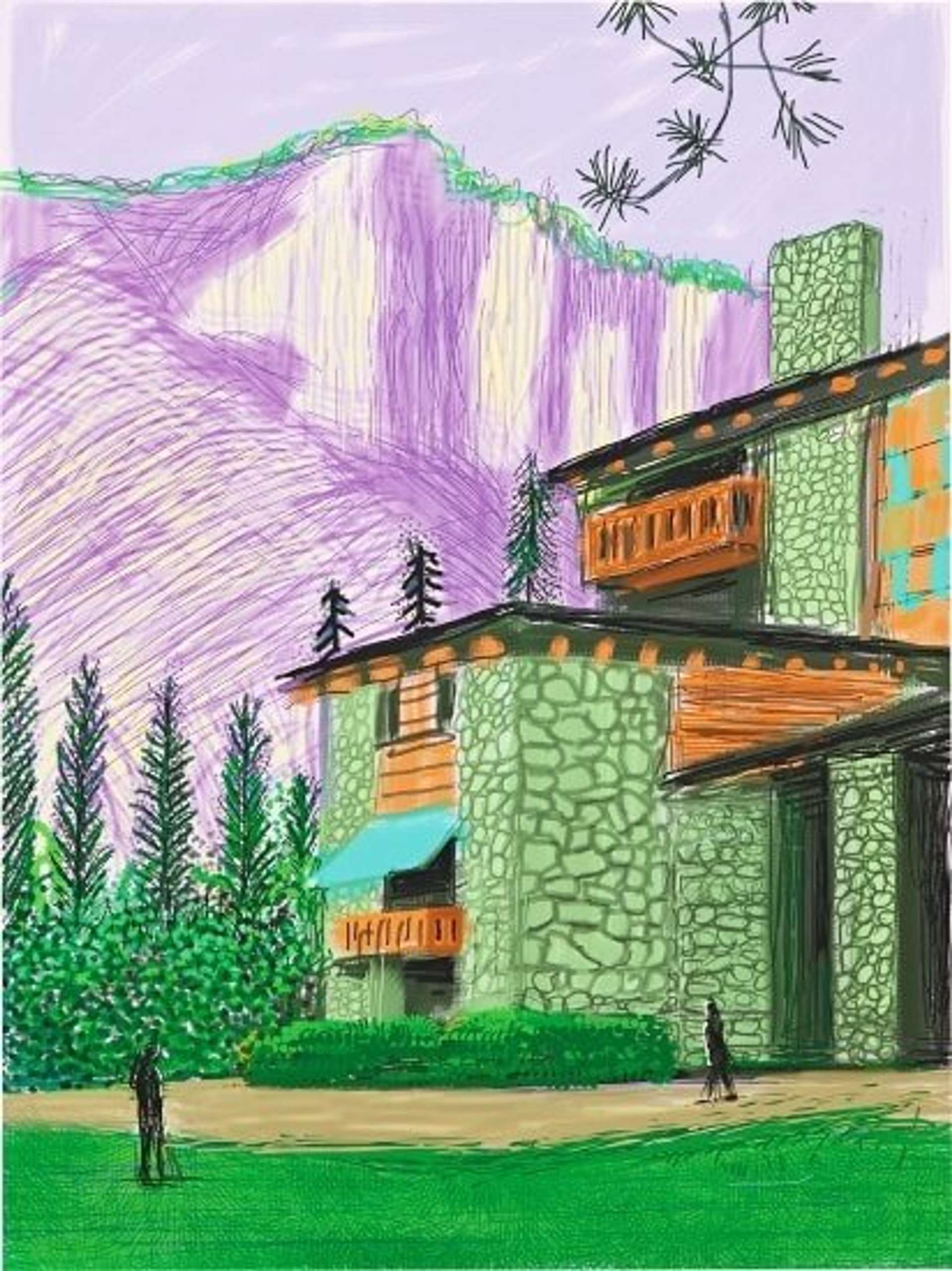 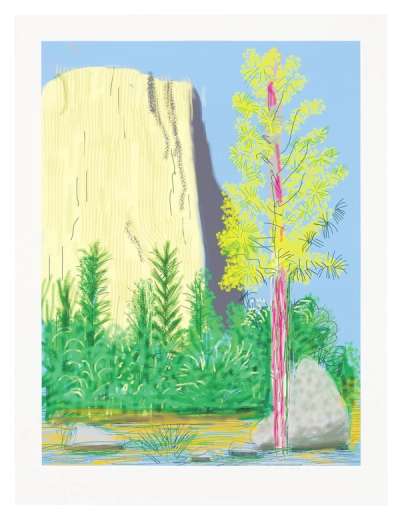 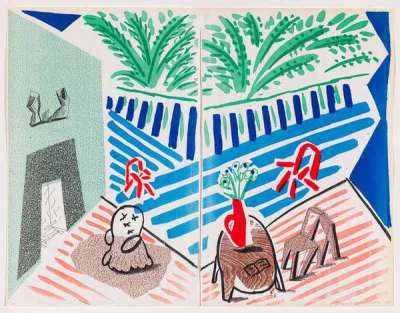 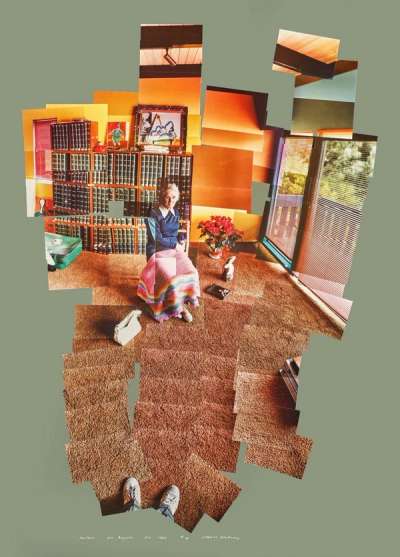 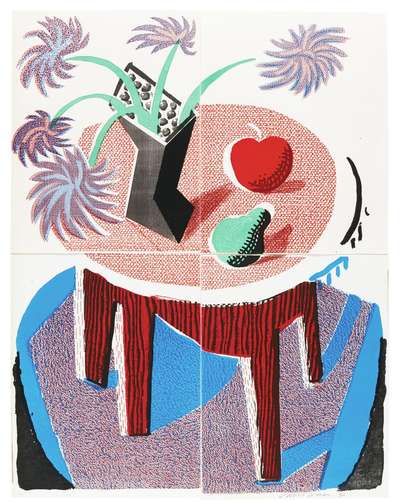 A Seller’s Guide To David Hockney

If you are in the market to sell a David Hockney print, here are a few pieces of advice before you start your journey, to make sure you sell at the right time and achieve the right price. Looking to... 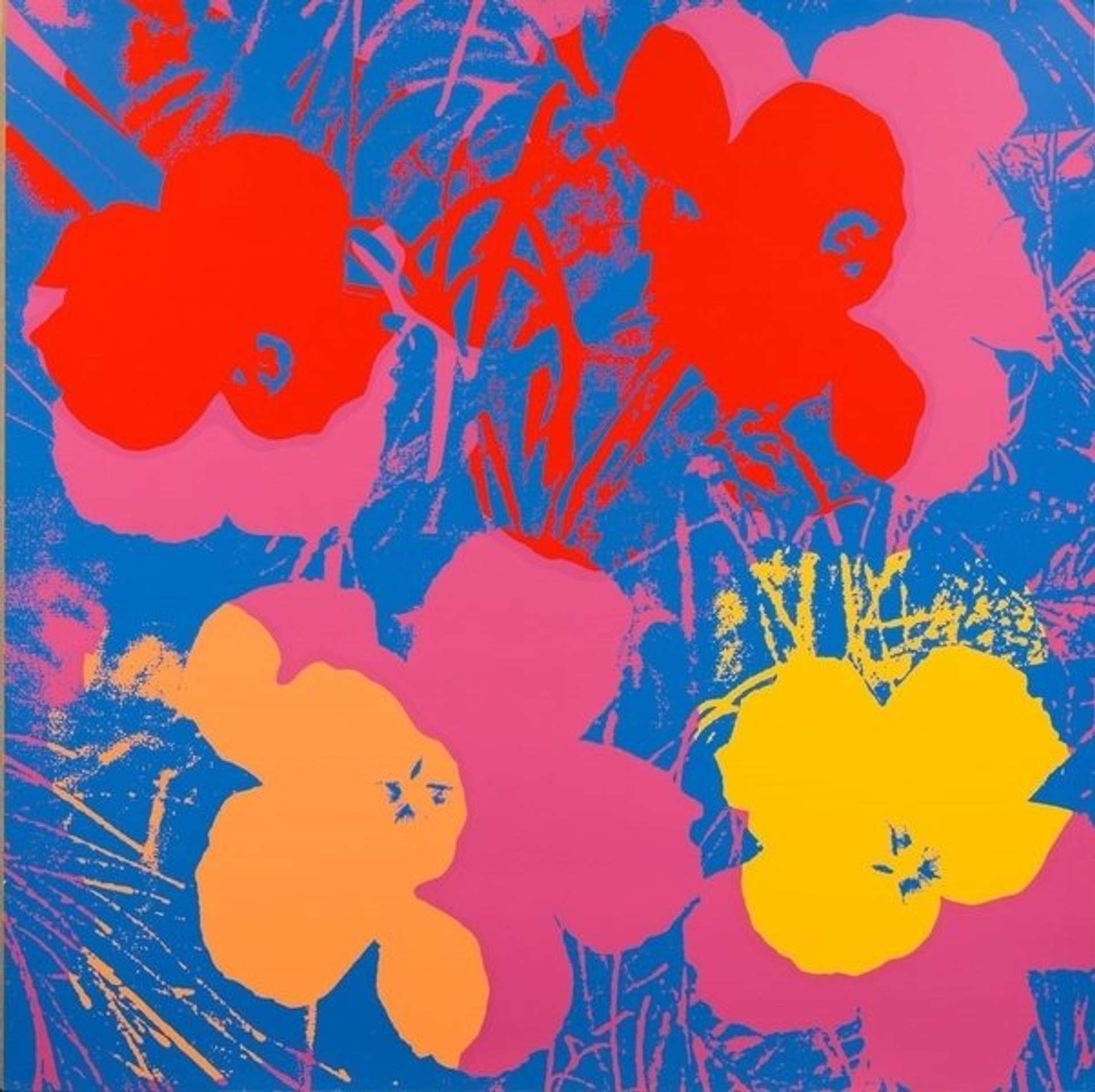 An Introduction To Collecting Prints And Editions

Whether you’re looking to start buying art or wishing to grow your existing collection, prints are a great way to pick up new works at an affordable price. It has never been easier to buy a print – o... The Currency series is Damien Hirst’s first venture into the NFT market, published by HENI Editions in 2021. Always one to shock, Hirst’s NFT project throws up questions of value through the subject...