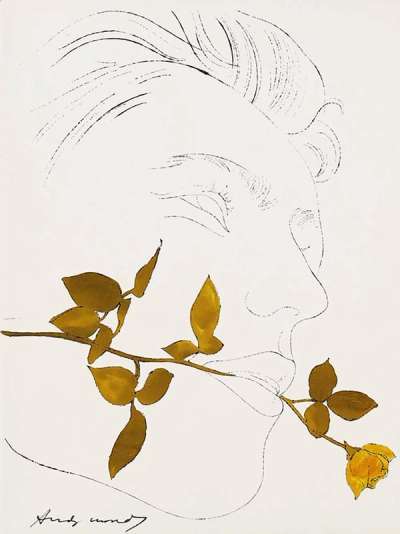 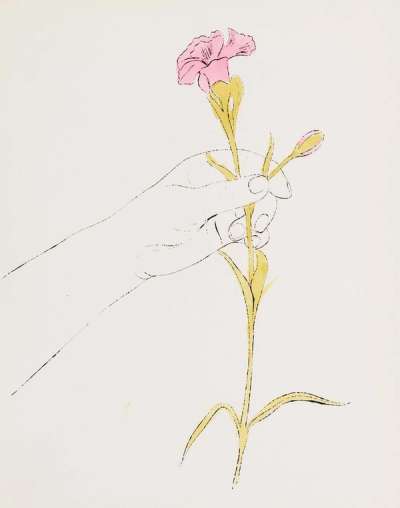 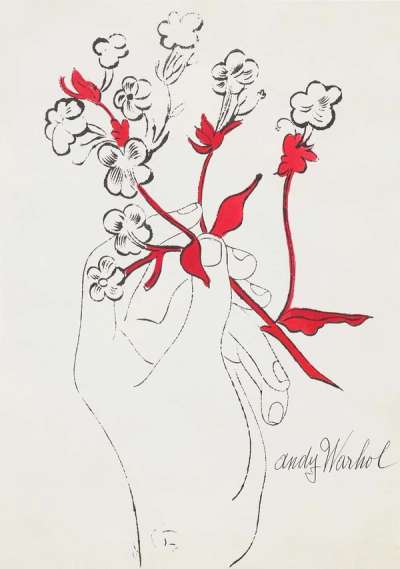 In the 1950s it was usual amongst artists to send examples of work to art directors by way of self-promotion and with the intention to connect and gain exposure for their new work. During 1957, Warhol published A Gold Book for exactly this purpose and it remains one of Warhol’s more elaborate self-published projects.

The print run was limited to 100 copies and the 22 page volume was bound in a lavish shimmery gold hard cover adorned with distinctive cursive lettering by Warhol’s mother, Julia Warhola, and featuring the famous actor James Dean who died in a car accident two years before in 1955.

Thirteen of the plates within the volume were included as lithographs printed on a rich gold paper and the rest were on white paper with black thinly lined images. These are reminiscent of Warhol’s blotted-line technique that he developed as an illustrator. The blotted-line technique is effective in the plates where the limited palette of gold and black evokes a strong image, versus some of the plates that are on white wove paper, which feature individually hand coloured watercolour. By working in this manner - selecting areas with particular attention to floral and nature motifs - Warhol achieves a harmonious juxtaposition.

A close friend of Warhol’s, the production designer Charles Lisanby, said that the book and the plates inside were inspired by traditional southeast Asian gold-leaf lacquered furniture with contrasting black designs. It was seen by Warhol on a trip to Bangkok during a seven-week journey around the world that he ventured on in 1956.

The depictions in this book are varied and showcase Warhol’s abilities as an artist. He described its subjects as “boys filles fruits and flowers shoes”, the work also includes images of Edward Wallowitch whom he was romantically linked to at the time. Many of Warhol’s initial inspirations throughout his career came from photography, his work and thought process often started off as a photograph before being developed and subsequently manipulated into a painting or print. In this instance Warhol traced the drawings of childhood from photographs taken by Edward Wallowitch. A Gold Book marks Warhol’s early career and touches on many subjects that he would subsequently continue to be fascinated with, including celebrity, childhood, commercialism, sensuality and sexuality.