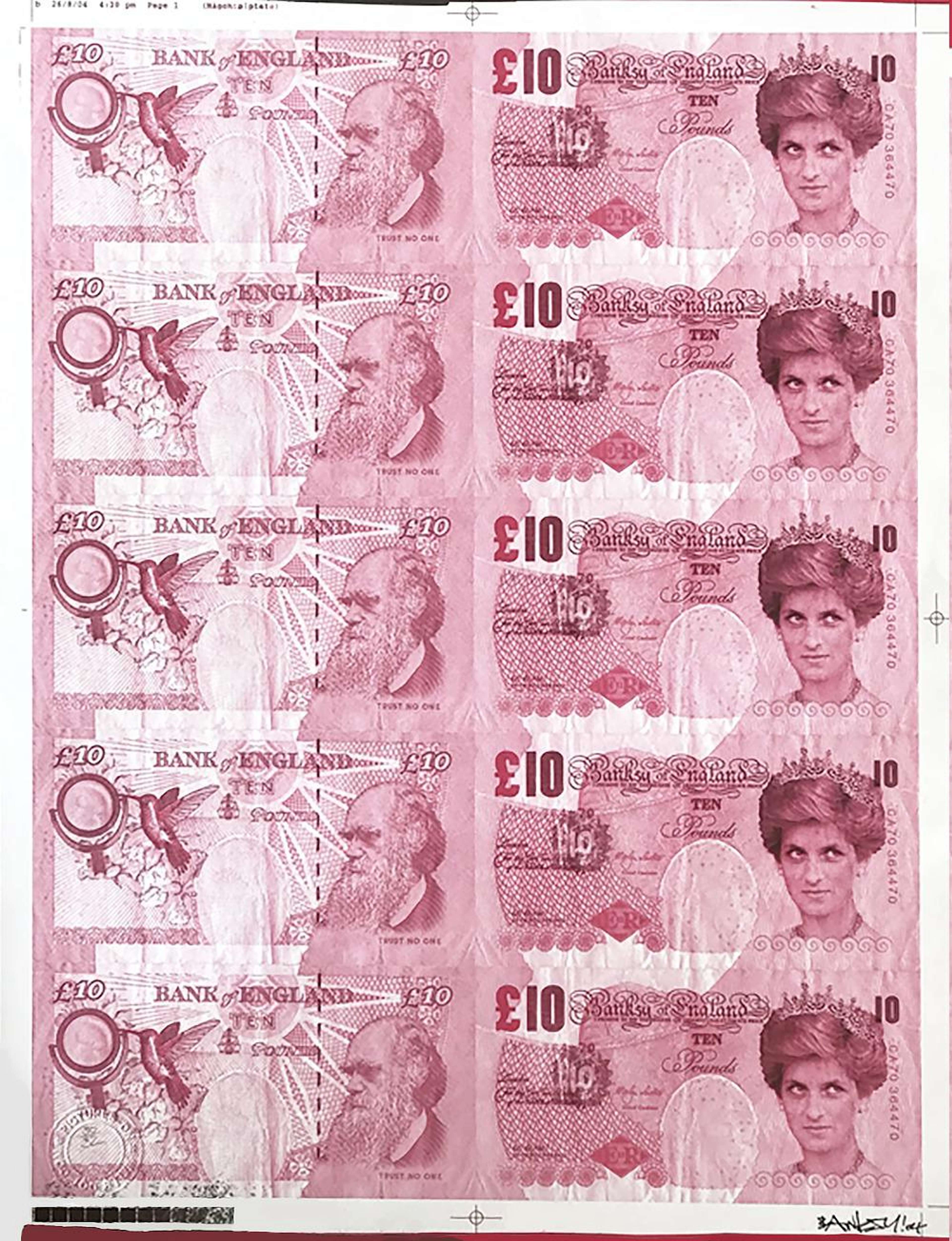 One of Banksy’s most prolific projects, the Di-Faced Tenner notes caused a public frenzy when they first rained down from the sky. And now, one of the most coveted Banksy prints, the image pays testament to the artist's original stunt

Here are ten quick facts, including just how many Di-Faced Tenners are in circulation.

What is the meaning behind Di-Faced Tenner?

The name ‘Di-Faced Tenner’ is a pun that works in two ways: firstly, because the face of the late Princess Diana (nicknamed ‘Lady Di’) has replaced Queen Elizabeth II’s on the front, and secondly, because the traditional British £10 note has been ‘defaced.’

The artwork is believed to be a collaboration

To add to the ingenious multi-layered name of the piece, Di-Faced Tenner is reportedly a collaboration between Banksy and street artist D*Face. D*Face is known for his satirical works that break down society’s reliance on consumerism, celebrity, and materialism – a mission that marries up with Banksy’s and lends itself to a striking collaboration like this one.

The notes have three subtle changes

At first, the Di-Faced Tenner looks almost identical to a traditional £10 note, apart from the swapped portraits. But on closer inspection, Banksy has altered a few more key parts. Instead of ‘Bank of England’ at the top, the note reads ‘Banksy of England’.

Directly underneath, in a sharp comment on the fate of Princess Diana, arguably at the hands of the media, reads “I promise to pay the bearer on demand the ultimate price”. On the back, underneath the portrait of Charles Darwin, Banksy has included the ominous statement of “Trust No One”.

The hidden messages that Banksy has included on the notes can be read as a criticism of the royal family and the tabloid’s treatment of Princess Diana. The notes put Diana in place of the Queen as a figure of authority and admiration, and position her as a victim of misplaced trust and the exceptional wealth of the royal institution. In both the notes’ design and how they were released, Banksy suggests that money comes before all else.

When were Di-Faced Tenners first released?

Banksy released the first Di-Faced Tenners by dropping suitcases full of these counterfeit notes into the crowds at the Notting Hill Carnival, Reading Festival, and Liverpool Street tube station at rush hour in 2004. In true Banksy fashion, the release of the notes was orchestrated in a way that created a frenzy of excitement and disruption.

Later that year, a second ‘suitcase’ release was put together for Banksy’s Santa’s Ghetto exhibition at Lazarides Gallery, along with a limited-edition series of screenprints featuring five notes. There are just 50 signed and 32 artist’s proofs of these screenprints in total.

How many Di-Faced Tenners are there?

There are approximately 100,000 Di-Faced Tenner notes in circulation, as Banksy printed £1million worth of notes for his 2004 stunts. But in his film Exit Through The Gift Shop, Banksy admitted to forging a total of £100 million of notes, most of which he still owns. Despite the sheer quantity of fake currency that Banksy entered into circulation during the stunts, he has never been prosecuted with any counterfeiting charges.

People have tried to use Di-Faced Tenners as real money

During the 2004 stunts, many members of the public who got hold of the notes were oblivious to the fact that they were holding a Banksy. At Reading Festival and Notting Hill Carnival, many people succeeded in spending the notes as real money – a move that they no doubt regretted once the news of the stunt had spread. The individual Di-Faced Tenners notes now regularly sell for thousands of pounds.

One of the reasons Banksy’s Di-Faced Tenners were so convincing is that they are printed on paper very similar to the kind used by the Bank of England at the time. The notes look and feel very authentic, particularly if you only look at the back (the side featuring Charles Darwin).

In 2019, the British Museum purchased a single Di-Faced Tenner note for its Coins and Medals Department, making it the Banksy work of art to officially enter the museum’s collection.

But this is not, however, the first time a Banksy has been on display at the British Museum. In 2005, Banksy installed a mock cave painting into the museum’s Roman Britain gallery. The piece, titled Peckham Rock, depicted a hunter pushing a shopping trolley and was accompanied by a plaque stating the work was created by artist Banksymus Maximus. The piece remained undetected for days, and the museum’s curator later said this had been a source of great embarrassment.

Photocopies and rip-off versions are rife at auction. Due to the nature and number of the notes, the authenticity of an individual Di-Faced Tenner note is incredibly hard to prove. As a result, Pest Control, Banksy’s official verification body, has implemented a unique way of controlling counterfeits: they staple half of a Di-Faced Tenner to each certificate of authenticity, but keep the other half as a match, in order to further ensure forgery can’t be made.