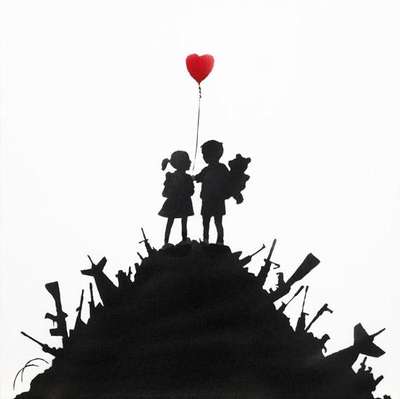 Kids On Guns was released in 2003 in an edition of 25 and is another example of Banksy's works that feature his iconic figure from Balloon Girl. Banksy made the painting using black acrylic and spray paint. It depicts the silhouettes of two children holding a teddy bear, standing on top of a hill of weapons.

The simple colour contrasts gives this Banksy print a profound meaning. The children stand for innocence, love and hope despite being surrounded by the violence and suffering represented by the dark pile of guns.

Kids On Guns’s is created with stencil silhouettes of a young boy and girl standing atop a hill of weapons and guns. Surrounded by violence and threat, both characters are looking at each other, the boy's left hand is resting on the girl’s shoulder as a sign of support. They seem victorious as they stand atop the pile of weapons.

In a different reading, they could be finding solace with each other in the aftermath of destruction that left them with nothing more than each other to build a new world. Both kids are holding toys, symbols of their young age and innocence - the boy is holding a teddy bear and the girl a heart-shaped red balloon, reminiscent of Banksy’s most famous work, Girl with Balloon.

The eye is immediately attracted to the only bright spot of colour in the piece, which evokes love and strength. That little girl reminds of Banksy's iconic Girl with Balloon, a girl losing her innocence as her red heart-shaped balloon drifts away or, as some suggest, she is recapturing.

Similar to that iconic artwork, Banksy’s motif of children as the symbol of innocence strikes a hopeful note within his otherwise ironic, satirical oeuvre. Both pieces seem to suggest that through embracing such positive values embodied by the two kids, humanity can overcome violence and war. At the same time it is a forewarning of what is to come if humanity continues down its current path.