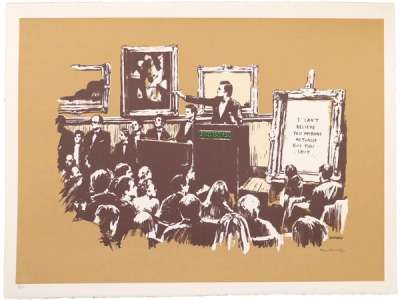 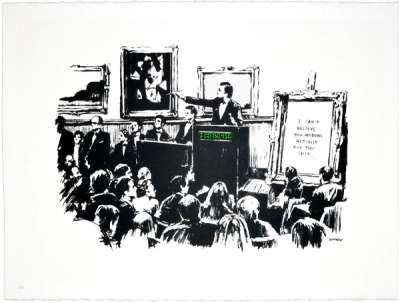 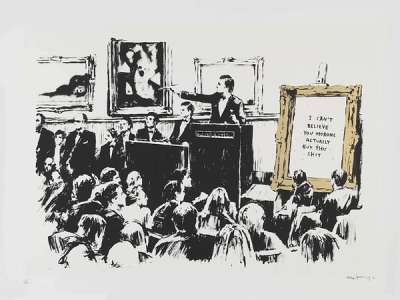 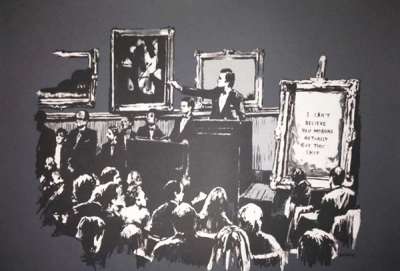 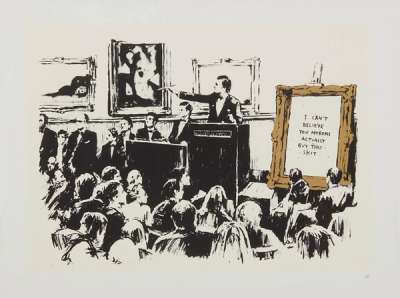 A scathing satire of the art market, Banksy’s 2006 Morons screen print depicts an auctioneer conducting a packed sale. It was first displayed at the artist’s exhibition, Barely Legal, which took place in a warehouse in Los Angeles that same year.

Morons is one of six Banksy prints belonging to a rare and valuable collection referred to as the Barely Legal print set, which also includes the works Grannies, Applause, Trolleys, Sale Ends and Festival. Morons is one of the most detailed and intricate works in the series.

Morons is based on the historic moment when, in 1987, Van Gogh's Sunflowers achieved a hammer price of £22,500,000 at Christie’s, setting the record price for the highest auction price paid for any work of art at that time. This moment marked the beginning of colossal changes in the art market, characterised by the emergence of the first ‘mega lot’ auctions.

In Morons, the large canvas up for auction bears the bold words, written in block capitals: ‘I CAN’T BELIEVE YOU MORONS ACTUALLY BUY THIS SHIT’. Here, Banksy mocks art collectors the world over who are ready to bid huge sums of money in order to acquire artworks by himself, or other famous artists. Ironically, the Morons screen print was included in a 2014 Sotheby’s exhibition curated by Steve Lazarides, entitled 'Banksy: The Unauthorized Retrospective'.

Morons was originally released at the exhibition in an edition of 100 unsigned prints, printed by Modern Multiples, which sold for $500 a piece. In 2007, Banksy’s UK-based printer Pictures of Walls re-issued additional Morons prints in three different colours; these joined a further 500 unsigned and 150 signed prints of the image rendered in monochrome, as well as 300 signed prints featuring a sepia background. The original LA edition differs from those released by Pictures of Walls, with the inclusion of a gold frame around one of the paintings portrayed within the print. 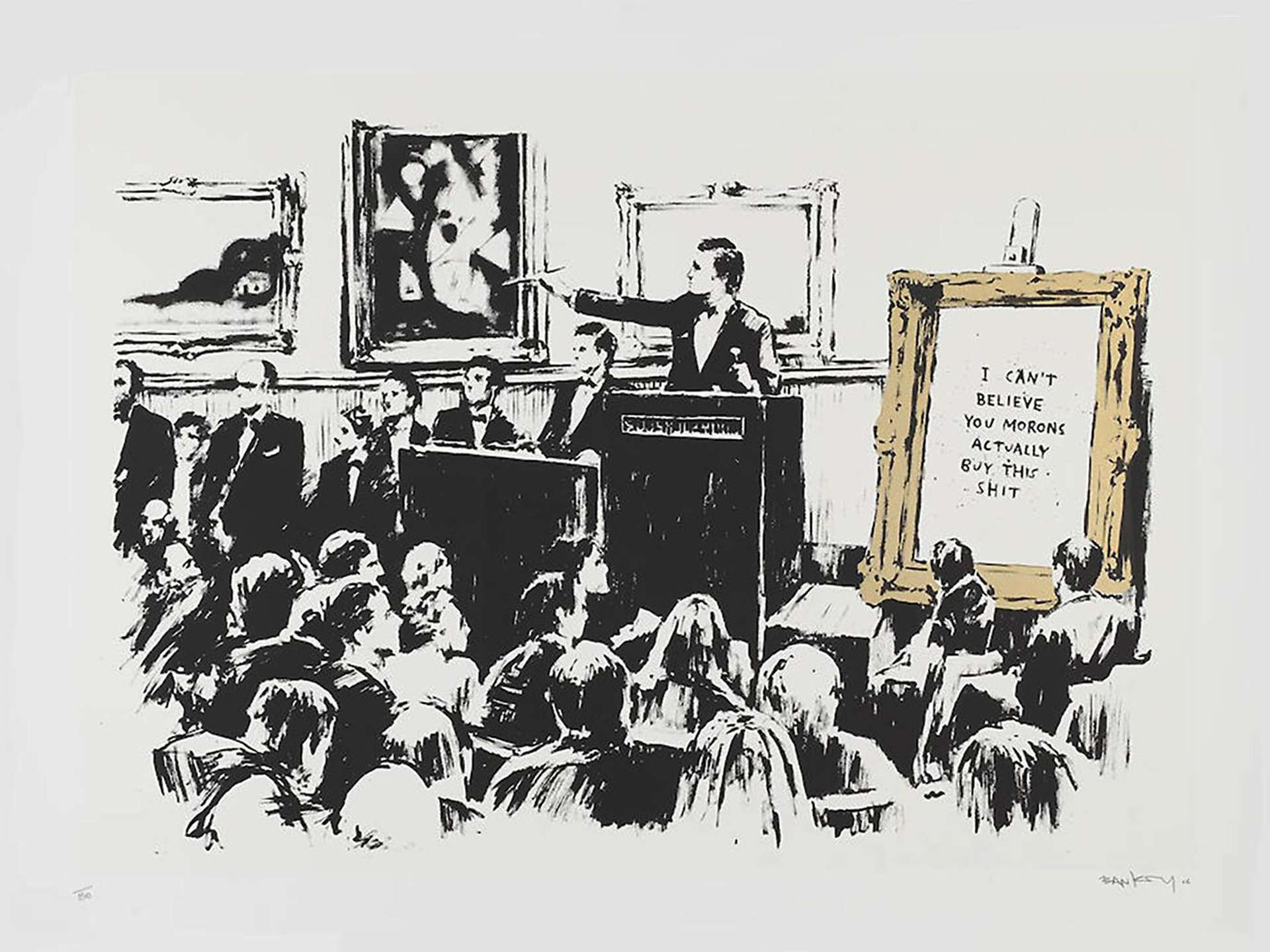 1. When was Morons first released?

Morons was first released in 2006 during Banksy’s momentous exhibition in Los Angeles, entitled Barely Legal. The three-day show was attended by art critics, musicians and celebrities alike, including Angelina Jolie and Jude Law. Even at this early point in his career, Banksy had a blossoming reputation for controversial and thought-provoking art. The exhibition prompted a rise in street art exhibitions and firmly established Banksy as an artist to watch. 100 unsigned screenprints of Morons were released at the event; all in black and white, with a gold frame around the artwork in the design. 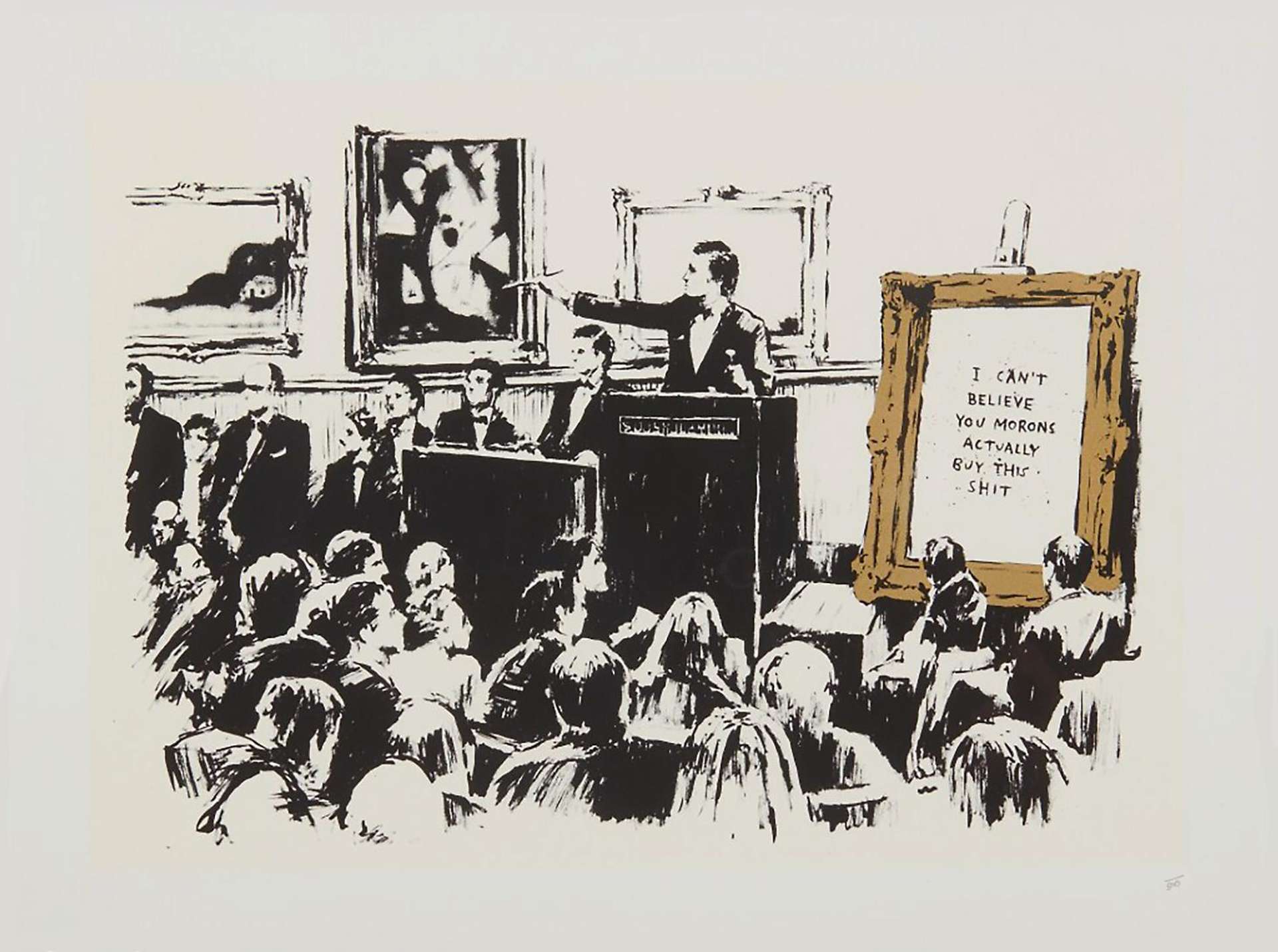 2. The first Morons prints sold for just US$500

At the Barely Legal show, the original screenprints by Modern Multiples were sold for just US$500 each, which would now be considered a steal for a Banksy print. Today, the Morons series sell for much higher – the current top price is £100,100 for a signed edition of Morons. 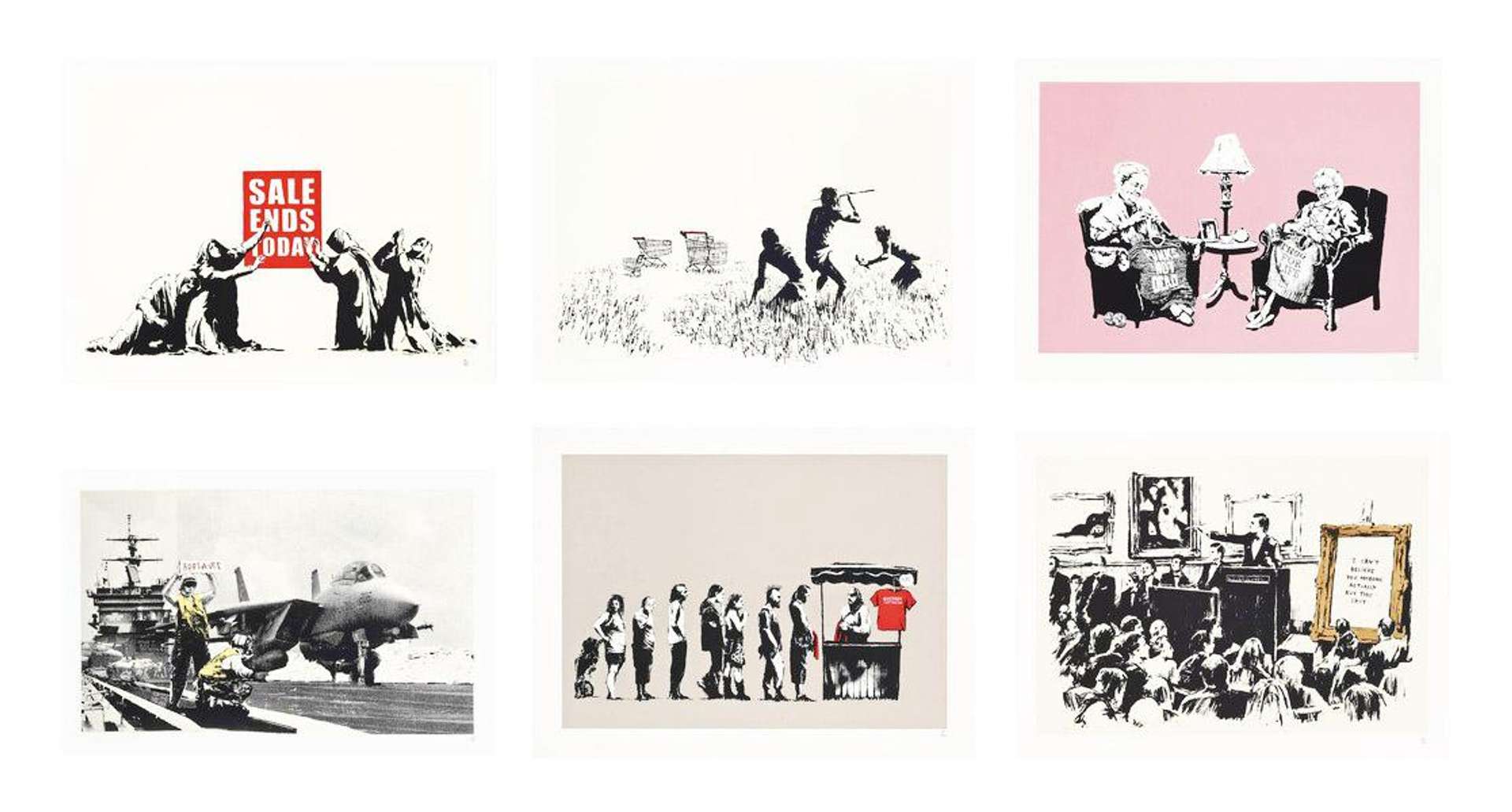 3. Morons was accompanied by five other prints

Visitors to Banksy’s Barely Legal exhibition had the chance to buy a special portfolio called the Barely Legal Print Set, which contained Grannies, Applause, Sale Ends, Festival, Trolleys, and Morons. These are now among Banksy’s rarest and sought-after prints, and even more valuable when sold as a complete set. After Barely Legal closed, Modern Multiples were ordered to destroy the plates for the six prints, so they could never be reproduced without the involvement of Banksy’s UK-based printer at the time, Pictures on Walls. 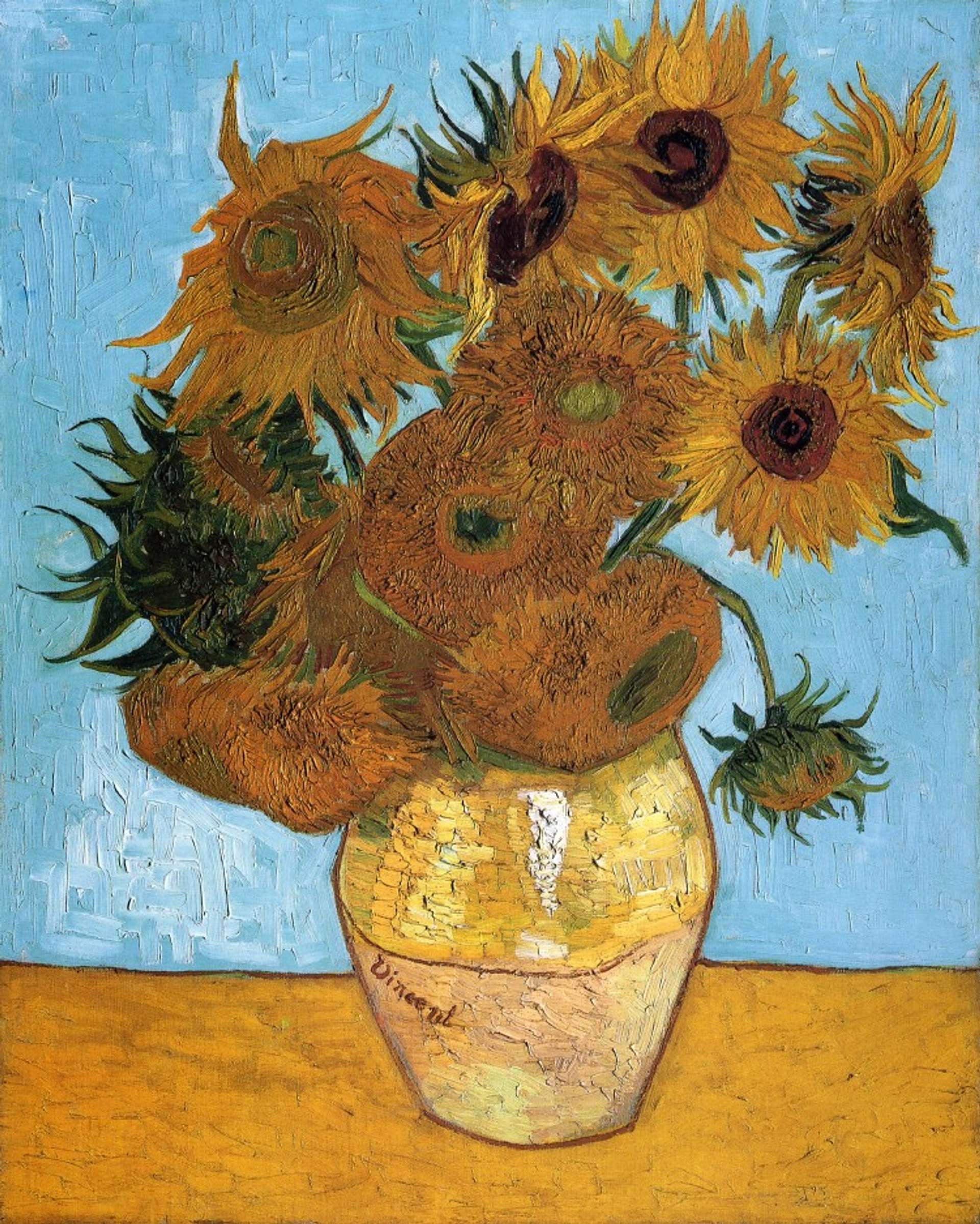