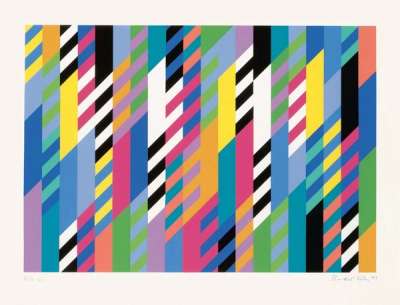 In the Zig / Rhomboid collection, Riley has begun to cross her iconic horizontal stripes of her earlier Stripes works with short diagonal elements. Executed in the 1980s and 1990s, these works evolved from the previously harmonious order of stripes as Riley sought to find new ways to generate interactions between colours. Even more dynamic and complex, these shapes straddle two-dimensionality and three-dimensionality, creating a sensation of motion that the static, horizontal-line works lacked. A seismic shift occurred in Riley’s practice in 1967 as she introduced colour into her works. Now, her focus was on the effect of varying colour combinations and the potential for narrative and emotion that this brings, concerned less with constructing optical illusions. Moving away from the lines and geometric shapes that defined her earlier works, in the Zig/ Rhomboid works, distinctions between colour and shape fall away, each leaning on the other for definition within the same plane.

By fashioning this innovative rhomboid form Riley claims a “whole new field of relationships opened up”. When enlarged, such as in Shade (1992), these forms become coloured planes that can take up different positions in space. Ultimately, these shapes serve several functions: “they can change scale, harmonise or contrast with one another, repeat, echo,’create places’, etc.” Across her oeuvre, Riley teases out the different energies inherent in varying tonalities, delighting in the push-and-pull created through the juxtaposition of competing colours.

These works represent Riley’s ongoing experimentations with colour, shape and form, adding to a complex oeuvre that demonstrates a long-standing fascination for the physical processes of perception. Working in series throughout her career, Riley’s work continues to shift stylistically. From 1961 to 1964, Riley worked exclusively in black and white, introducing tonal greys in the late 1960s, and expanding this to a full spectrum of colour in 1967. Starting exclusively with lines in 1967, Riley then adapted these into the diagonal shapes we see in this collection. In the 1990s these forms were developed further into curvilinear forms with segments weaving across the canvases.

When first exhibited, many interpreted Riley’s diagonal rhomboid forms as painterly strokes, enlarged and formalised, deriving once more from Georges Seurat. Indeed, the integration of these forms by Riley was in part an attempt to rediscover pictorial craftsmanship. Overall, this series embodies Riley’s ability to invent and reinvent, and her ongoing, evolving understanding of abstract painting.