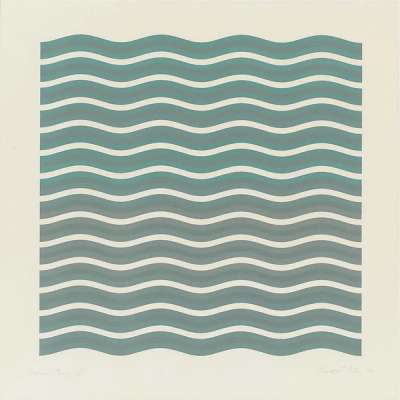 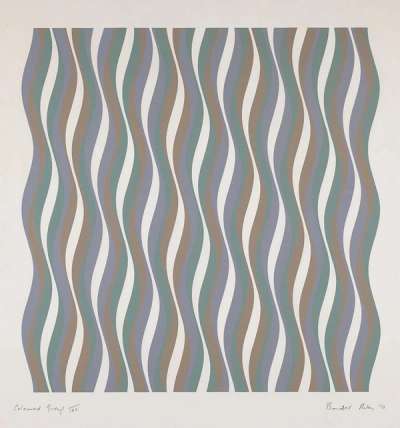 A perfect embodiment of Riley’s Op Art practice, Coloured Greys trick and sculpt our perception through the use of relatively simple abstract forms.

The two prints’ repetition of geometrical abstract forms and undulated movements instantly collocate them within the artistic endeavours of Op Art, a Post War abstract movement. Simultaneously, the choice of dim and light-coloured undertones situates the pieces close to Riley’s earliest monochromatic works, examples of which are Blaze or Nineteen Greys C, right before Riley began to adopt the vibrant and bright nuances of works like Shadow Play and Fête. Thus, the prints pertain to a historical turning point in Riley’s career, attesting to the transition towards her more playful and vivacious pieces whilst inheriting the subtlety of her earliest artistic efforts.

The prints strike in their perfect repetition of geometrical undulated lines. However, closer inspection and engagement with the wavy patterns reveals the optical illusion of movement working at the core of the pieces. Though initially championing the repetition of abstract forms seemingly executed with mechanical precision, the prints reveal themselves as provocatively-constructed optical experiments meant to play with the viewer’s visual and perceptual field: the undulated linear pattern affects the viewer’s optic nerves and induces a deceitful sensation of movement, introducing three-dimensional corporeality to the bi-dimensionality of the paper. This false effect of movement endows the prints with a dynamic quality, stimulating the perpetual response of the viewer and inducing an activation of vision operated through an illusory sensation of movement.

Though certainly situated at the core of Op Art’s artistic agenda and inquiry, the overt manipulation of the visual field of the spectator has come down to art criticism under the appellative of the “Riley sensation”, which in the words of art critic Robert Kudielka concerns “the movements of the eye as it discovers relationships within the painting, their accompanying dislocations and the irretrievable moment when the formal structure of the painting disintegrates.”

This artistic agenda based around the manipulation of visual sensitivity, Riley claims, developed after a careful study of French Pointillism, informed by Eugène Chevreul’s theories on the use of colours. Particularly, a close engagement with Georges Seurat’s art led Riley to interrogate and reflect upon the formal constitutive qualities of painting, colour and form. Through the juxtaposition of primary colours, Pointillism had argued, the eye could be stimulated to perceive the painting more vibrantly than if the paint had been mixed beforehand. Seurat's formal investigation, in turn, shaped Riley’s interest in how the artist and geometrical abstract forms could trick the eye solely by using a combination of colours and forms, an artistic inquiry that ultimately concerned and brought Op artists together.

Thus, the prints collocate themselves within a highly experimental artistic tradition, one that considers art, in Riley’s own words, as an “optical science” to be played with, and one which foregrounds the viewers’ interaction with the artwork as essential to its construction of meaning. Not only compellingly beautiful then, these prints embody an essential visual document of one of the most innovative and wittingly creative moments of the history of abstraction and Post War art, testifying to Riley’s rise to prominence within the movement and the international art scenery.