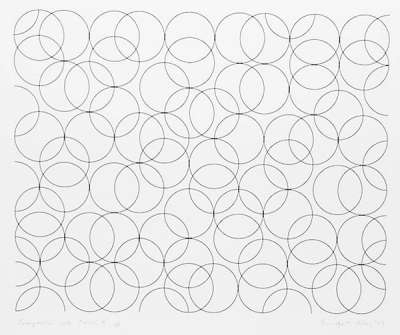 A series of 5 prints produced in 2005, Riley’s Composition with Circles harks back to the monochromatic palette that defined her early career. Riley’s geometric abstractions led her to become a major proponent of the Op Art movement in the 1960s. Well known for her works in jubilant hues, these monochromatic works are reminiscent of Riley’s exclusively black and white works of her early career. These works were originally large site-specific wall installations at the Kunsthalle Bern, the Tate Britain and the Centre for the Arts in New York.

Born in 1931, Riley studied at Goldsmith’s College from 1949 to 1952 and the Royal College of Art from 1952 to 1955, amongst fellow students Frank Auerbach and Peter Blake. In the summer of 1960 Riley travelled across Italy, witnessing the dynamic works of Italian Futurists, such as Giacomo Balla and Boccioni. Upon returning to London, Riley embarked on her first Op Art works, which explored the dynamism of sight and produced a disorientating effect on the eye. In 1967, Riley introduced colour into her work, starting with her first, instantly recognisable, stripe paintings. However, Riley would occasionally return to her monochromatic style, such as in the Composition With Circles series.

Although appearing random at first, Riley’s compositions are the result of intense precision. Riley believes the controlled, formal logic of her works allows for a more intense synaesthetic freedom. Riley experiments with simple, structural units in her works to explore the physical and psychological responses of the eyes. In this series, the circles constituting the compositions seem to jostle and oscillate across the two-dimensional surface as one’s eyes move across. Such disorientating effects are what Riley endeavoured to produce in her geometric works. Despite Op Art being seemingly unrelated to the external world, Riley continues to find meaning inherent in the style of art. Riley’s works are never intended to be an end in themselves, but a medium through which each viewer has a subjective experience, influenced by their own understandings. Riley, inspired by Seurat’s works, in which the observer was transformed to active participant, seeks to recreate such sensations in her artwork. For Riley, “perception became the medium”. This reflects Riley’s utopian vision of the social function of art: regarding her artistic practice as an inherently social act, Riley believes the viewer completes the experience of painting, by the very act of seeing the artwork. These large-scale works represented a major development in the participation of the onlooker in perceiving Riley’s art as the viewer’s experience is now dependent on their own situation and bodily propositions.

Imploring the viewer to consider how it physically feels to look, Riley constructs geometric patterns which cause perceptual disruption. Enacted with mathematical characterisation, Riley’s Composition With Circles series is exemplar of Riley’s in-depth experiments with form, composition and visual perception. As complex as they are simple, the works in this series evoke movement, yet are entirely static. There is a timelessness inherent to Riley’s wholly modern works, both in their conception and execution.