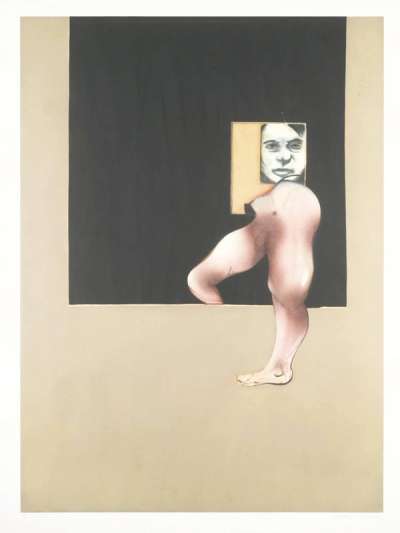 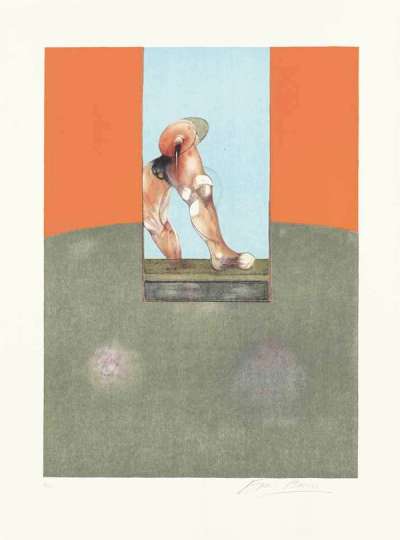 This collection of prints, entitled Final Triptychs, is dedicated to showcasing the genius behind two definitively ‘final’ moments in the long and tumultuous career of Irish-born artist, Francis Bacon. Comprising prints based on two triptychs painted in 1987 and 1991, the collection serves to trace – and close – a developmental and thematic genealogy visibly present in Bacon’s work since as early as the 1960s. Having proven obstinately faithful towards the triptych for the length of his career, a brief deviation in favour of the traditional portrait notwithstanding, the three-part format lays, once again, at the heart of this collection. With its origins in late-Medieval religious paintings produced in the Byzantine Empire, the triptych has often operated as a reference to Christianity’s Holy Trinity; in Bacon’s work, as this collection shows, the triptych bears a similarly referential - and symbolic - significance.

In Triptych 1987 (centre panel) (1989), we are made to play witness to a strikingly dynamic component of Bacon’s œuvre: Triptych 1987. Illuminating the textural complexity of one of Bacon’s final paintings, produced shortly before his death in 1992, the print recalls Bacon’s depictions of bullfights. As in Study For Bullfight (right panel), human and animal forms come into violent confrontation with one another. Positioned within a light-blue oblong – a geometric framing device and recurrent motif of Bacon’s work – a truncated pair of legs are punctured by a bull’s horn. With its left leg held high on a platform-like surface, the figure’s victorious stance is ruptured by the carnal presence of an animal fighting for its life.

In another print, Triptych 1991 (right panel) (1992), Bacon makes a makes a pointedly clear reference to one of his most famous works: Triptych August 1972. Part of the so-called ‘Black Triptychs’, this work is primarily concerned with the suicide of Bacon’s muse and onetime lover, George Dyer, in 1971. Recreating key elements of the 1972 painting thirty years later, Bacon places his portrait on top of another truncated figure. Facing inwards towards the work’s central panel, itself a recreation of its 1972 equivalent, the figure speaks to Bacon’s sustained pre-occupation with this tragic event. In doing so, it makes a secondary reference of art historical nature: in religious triptychs, central panels are often reserved for objects of great importance, worthy of devotion.