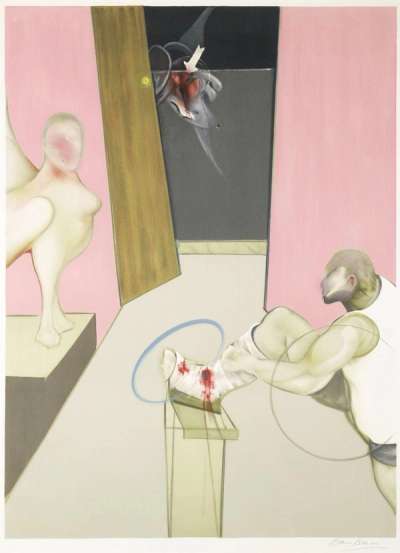 The Mythology collection references Irish-born artist Francis Bacon’s long held fascination with Greek antiquity. A central component of the Mythology collection, Oedipus And The Sphinx After Ingres (1984) is a signed lithograph print and copy of Bacon’s 1983 painting of the same name. A pastiche of the 1808 painting Oedipus And The Sphinx by French painter Jean-Auguste-Dominique Ingres, it depicts a semi-wounded Oedipus as he lunges forward before the Sphinx – a mythological creature revered by the Ancient Greeks and Egyptians. Half-human, half-animal, the mythological creature is rendered as a statue in Bacon’s depiction of this episode from Greek antiquity, in which Oedipus meets the Sphinx and must answer a riddle to gain access to the city of Thebes.

Contrasting with the decidedly animate Sphinx of Ingres’ painting, Bacon’s version is set atop a plinth and possesses few recognisable features. In the background of the painting - behind an athletic Oedipus - hangs the shadowy presence of Eumenides. A Greek deity representing vengeance, Eumenides is one of the three ‘furies’ that feature in Bacon’s 1944 and 1988 paintings, Second Version Of The Triptych 1944 and Three Studies For Figures At The Base Of A Crucifixion. The presence of Eumenides as motif signals Bacon’s decisive return to Greek mythology, and particularly the three tragedies the Oresteia of Aeschylus – a semi-literary point of reference explored in a number of paintings completed by the artist between 1979 and 1981. as far-from-human, biomorphic entities, Eumenides and the Sphinx allude to another longstanding fascination of Bacon’s: the intersection between the animal and the human. Despite spending much of his life in the bars and clubs of London’s West End, Bacon’s early years in rural Ireland appear to have given him a deep interest in all things ‘wild’. Bacon’s father, with whom he had a turbulent relationship, worked as a racehorse trainer, and this has often been cited as a formative influence on the artist’s perception of humanity and its relationship to the animal kingdom.

This is not the first time Bacon melds human and animal in his work: Sphinx – Portrait Of Muriel Belcher (1979) depicts the nightclub owner and founder of The Colony Club Room (one of Bacon’s favourite watering holes) as the mythical creature, famed for its ruthlessness and wicked temper. In the early ‘50s, Bacon is known to have travelled to Egypt, where he is likely to have been introduced to the figure of the Sphinx. The artist was similarly well-known for his spending long periods attending to singular subject matter, such as Crucifixions.

After Second Version Of The Triptych