Love, A Decisive Blow Against If 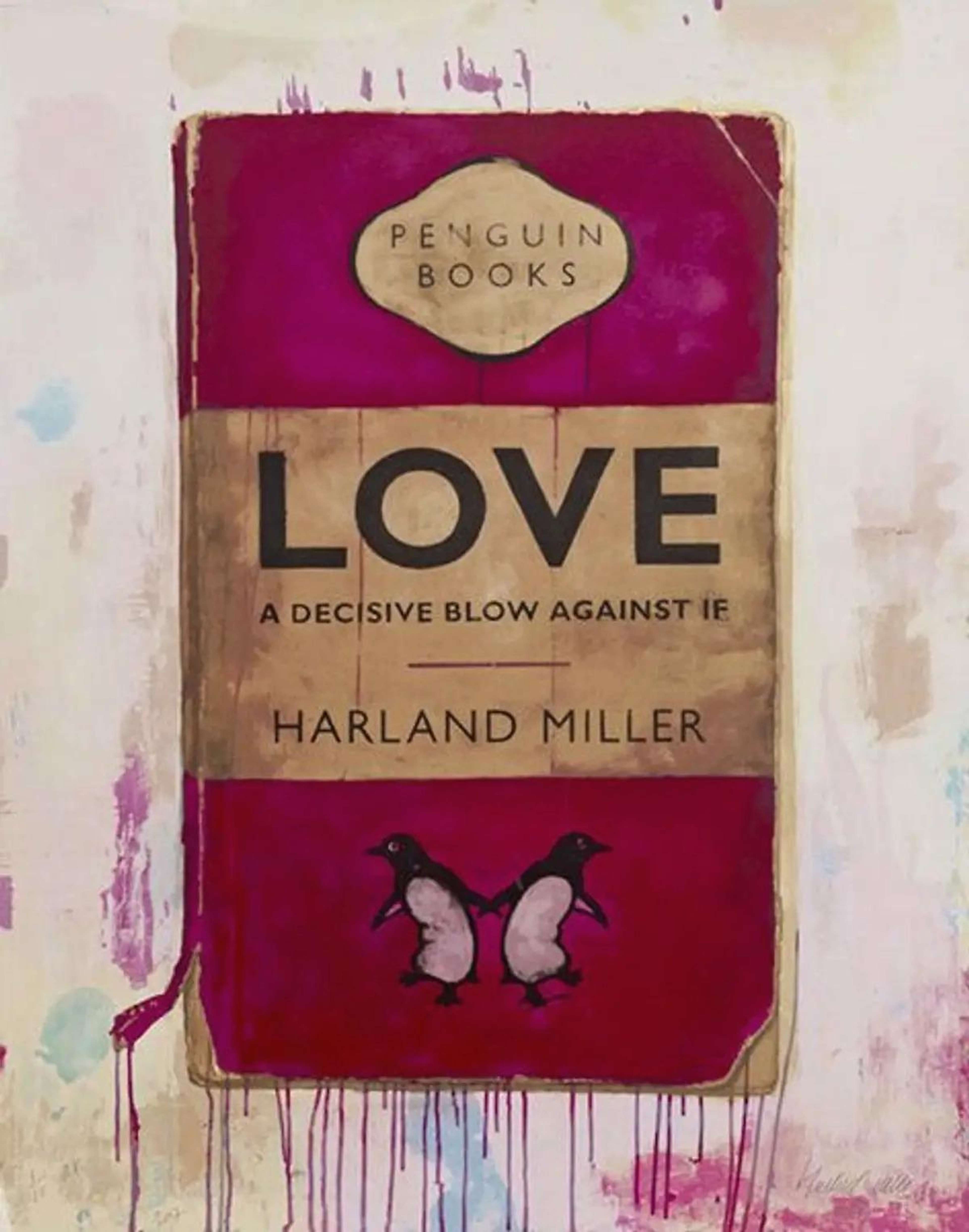 Love, A Decisive Blow Against If
Signed Print

Love, A Decisive Blow Against If is a screen print from an edition of 50.

Love, A Decisive Blow Against If belongs to Miller’s most recognised series of works, the Penguin series. Bridging the gap between art and literature, these large-scale works present a unique interpretation of the book covers, differentiated only by the altered titles. Often sardonic, humorous, inappropriate or nostalgic, these titles stamp the artist’s mark upon the images, and offer a fresh twist on the familiar literary iconography. Miller explains, “people read before they can stop themselves.” he goes on, “you can really say anything you wanted in the middle panel, because people are already used to the form of the Penguin book, so in that way the text carried more weight than the painting.”

Love, A Decisive Blow Against If is a defiant phrase emblazoned across the forefront of the work, a statement that speaks volumes by arguably encouraging not to live by the phrase ‘what if’. The titles, Miller says, originate from “nowhere in particular. Everywhere, anywhere.” The titles are often provocative or poignant, subversively sociopolitical, sometimes referencing the original author, whilst at other times, as in Love, A Decisive Blow Against If, blatantly citing Miller himself as their creator. Sometimes the titles reference catchphrases from popular culture and triggering a ring of distant familiarity. He prefers for the viewer to connect to the phrases personally, and draw their own individual interpretations rather than imposing his own meaning upon them.

Miller himself actually first achieved widespread critical recognition as a writer, with his debut novel, Slow down Arthur, Stick to Thirty published in 2000. Then in 2001, merging his interests in image and text, Miller began creating a series of works based upon the Penguin book covers, which he picked up from thrift shops during his time spent living in Paris, but that also reminded him of his childhood in the North of England. Inspired by writers such as Ernest Hemingway and Scott Fitzgerald, Miller was able to incorporate his love of classic literature with painting. A Decisive Blow Against If is an archetypal example from this body of work, which combines figurative painting with elements of popular culture and literary imagery. The faded cover, torn edges and stained, smudged pages nostalgically recall a lifetime history of love and use, visually referencing our intimate, long-standing relationship with text and language, a visceral, physical connection between person and page that passes through the generations. The American painter Ed Ruscha is a clear influence for Miller, marrying text and image in a radical juxtaposition using slogans and phrases to compliment his paintings. Mark Rothko, too, is another such acknowledged source of inspiration for the British artist, using bands of colour such as the rich, raspberry pink and white seen in the visual aesthetic of Love, A Decisive Blow Against If. Miller has explained that he believes that the colours of the work change or affect the way in which the reader interprets the title, influencing the mood or reception of the text.