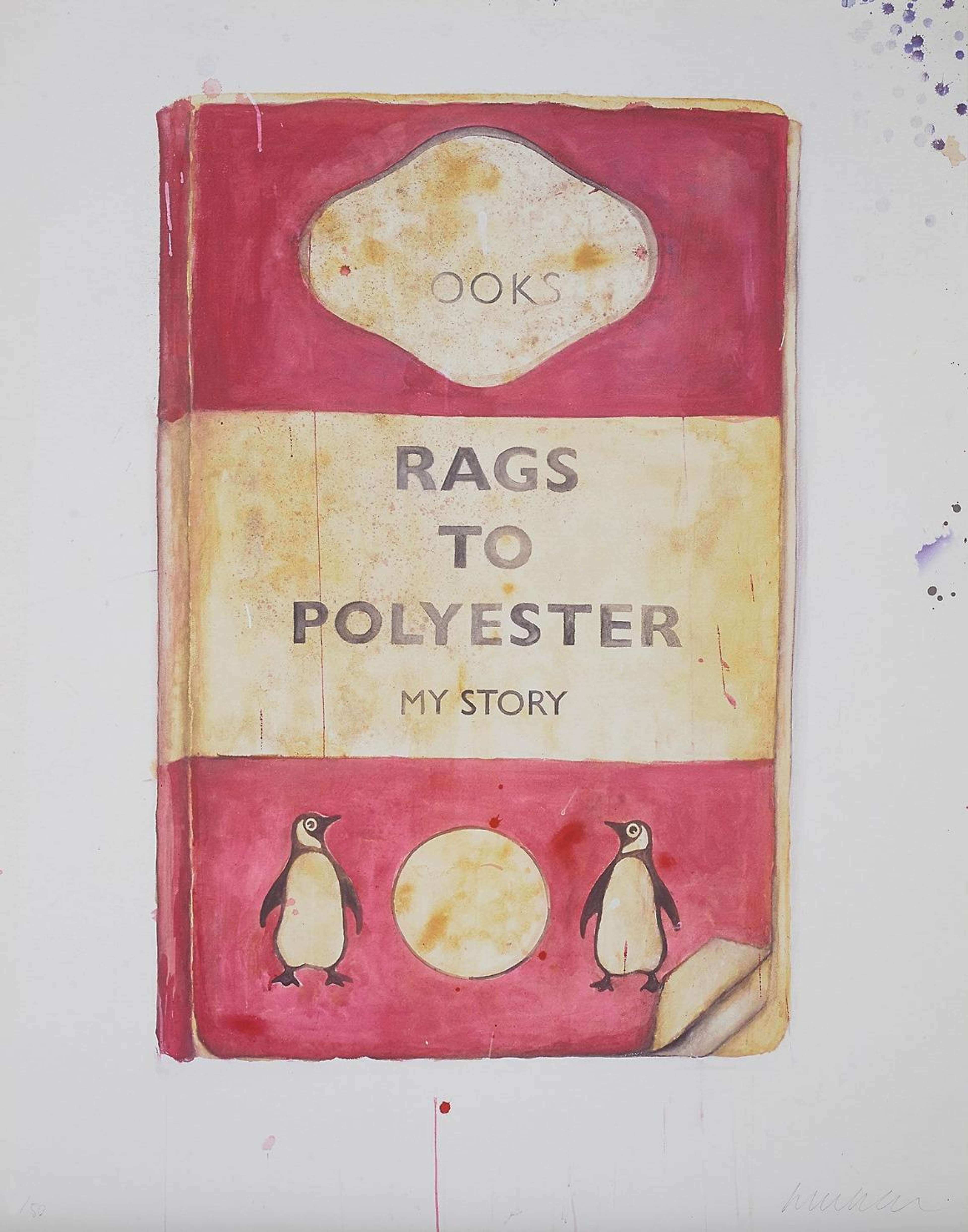 From Rags To Polyester belongs to one of Harland Miller’s most recognised series of works inspired by the Penguin book covers. From Rags To Polyester plays upon the well-known phrase ‘from rags to riches’, which suggests a commentary infused with underlying notions of class and modernity. One interpretation could be that it reminds a viewer of classic 20th century English comedians like Albert Modley and Frank Randle, in true Northern spirit. Drawing upon his Northern roots and steeped in British heritage, Miller’s work celebrates a treasured part of his country’s national aesthetic identity, whilst at the same time forging a fresh interpretation of that aesthetic that catapults it straight into contemporary culture, reimagined in a new, artistic context alongside bold text. The text takes precedent and combined with the dripping colour and painterly brushstrokes the effect of these works is one of an ageing paperback infused with artistic vigour.

Miller himself actually first achieved widespread critical acclaim as a writer as opposed to as an artist, with his debut novel, Slow down Arthur, Stick to Thirty published in 2000. Then in 2001, merging his interests in image and text, Miller began creating a series of works based upon the Penguin book covers, which he picked up from thrift shops during his time spent living in Paris. Unable to understand the titles in French, he began to fabricate his own titles. He explains, “you can really say anything you wanted in the middle panel, because people are already used to the form of the Penguin book, so in that way the text carried more weight than the painting.” Inspired by writers such as Ernest Hemingway and Scott Fitzgerald, Miller was able to incorporate his love of classic literature with painting. From Rags To Polyester is an archetypal example from this body of work, which combines figurative painting with elements of popular culture and literary imagery. With painterly brushstrokes and dripping colour partly obscuring the text, the effect is one of an ageing paperback infused with artistic vigour. The faded cover, torn edges and stained, smudged pages nostalgically recall a lifetime history of love and use that visually references our intimate, long-standing relationship with text and language, in a visceral, physical connection between person and page that passes through the generations. The American painter Ed Ruscha is a clear influence for Miller, marrying text and image in a radical juxtaposition using slogans and phrases to compliment his paintings. Mark Rothko, too, is another such acknowledged source of inspiration for the British artist, with his use of prominent bands of colour such as the pink and white seen in the visual aesthetic of From Rags to Polyester.