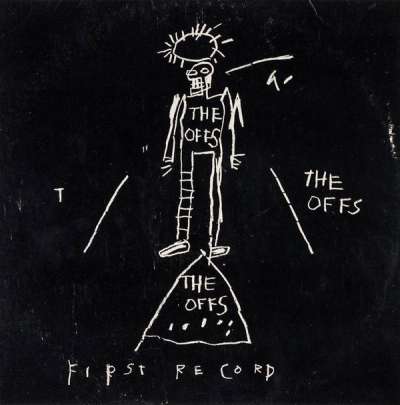 It would be wrong to perceive Jean-Michel Basquiat as solely a visual artist given his considerable presence in various corners of New York culture in the late 70s and early 80s. Friend of Basquiat Michael Holman remarks: “we were in the band ourselves, making art ourselves, we were acting in films, making films, we were all one-man shows, with a lot of collaborations. That was the norm, to be a polymath. Whether you were a painter, an actor, a poet… you also had to be in a band, in order to really be cool.”

Musical references abound in Basquiat’s oeuvre. The eclectic music scene of New York in the late 70 and early 80s, which saw the growth of hip-hop, no wave and the sustained popularity of jazz, had a marked influence on the artist’s visual language. Not only did the music scene constitute an important element in the backdrop to Basquiat’s art, but he was also involved in the music scene itself, forming the band Gray (named after the medical encyclopaedia Gray’s Anatomy, another key inspiration in the artist’s work) which played at the trendy Mudd Club, developing a unique sound inspired by Art Noise.

Basquiat pays tribute to two of his musical inspirations, the bebop artists Charlie “the Bird” Parker and Dizzy Gillespie in his iconic triptych ‘Horn Players’. This painting sees portraits of the two jazz legends drawn in the artist’s inimitable style amongst frenzied mark making which meshes text and image, with the middle panel citing Parker’s legendary album ‘Ornithology’.

Basquiat shared with these artists a determination to maintain artistic integrity and avoid commodification as entertainers. Throughout his career, Basquiat sought to extricate himself from the market forces of the art world, keen to avoid the marginalisation experienced by other black artists and musicians.

Beat Bop/Test Pressing and The Offs First Record pay tribute to Basquiat’s passion for his musical influences, not only in subject but also in form. The prevalence of crossing out has been compared to the repetitive movements of a disc jockey, with Dr Todd Boyd remarking that “Basquiat’s art looks the way no wave sounds: an untrained raw expression”. The persistent use of shape and form to mimic the actions of music making renders the influence of music on Basquiat’s oeuvre impossible to ignore.

Jawbone Of An Ass