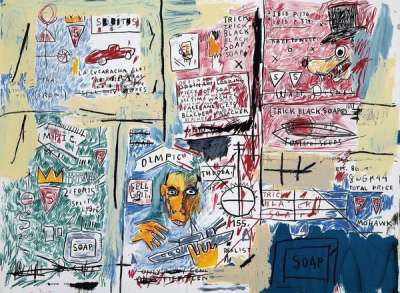 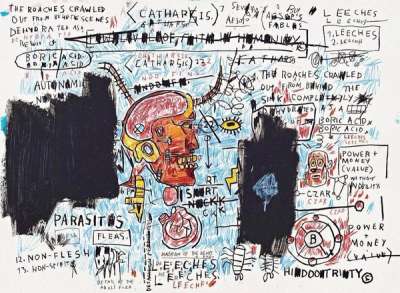 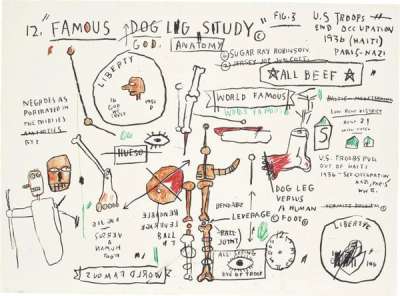 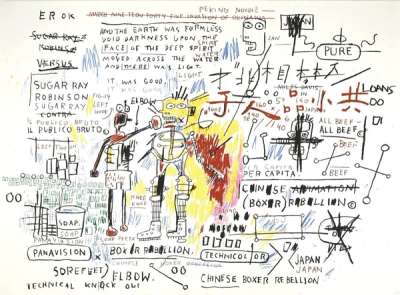 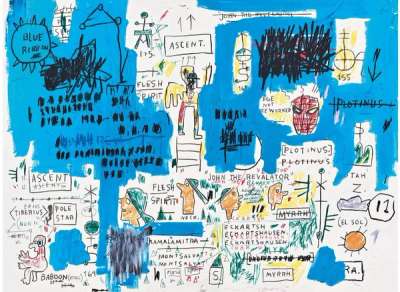 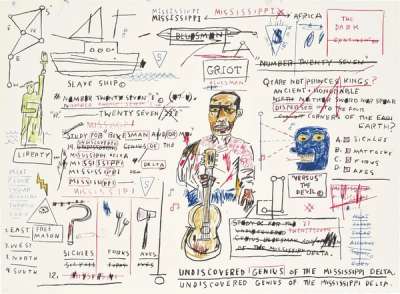 This grouping of prints is based on the series of paintings entitled The Daros Suite of Thirty-Two Drawings, so-called due to their housing at the Daros Collection in Zurich. A range of pertinent themes in Basquiat’s oeuvre are feverishly present in this collection. As is characteristic of Basquiat’s work, the mark making is chaotic, frenzied and childlike, replete with blunt, evocative sketches. What at first appears to be a riotous approach to composition belies a method driven by intention and attention to detail, causing fundamental social contradictions to run feverishly across the images’ surface.

The sporting theme of Olympic and Boxing evoke other images by the artist which pay tribute to Black icons of sport which appear consistently in the artist’s work. In Jesse, which references the iconic athlete who set world records at the 1936 Olympics against the backdrop of Hitler’s Germany, swastikas can be seen alongside labelled diagrams of the athlete’s body, juxtaposing Owens’ athletic greatness with the social context of the rise of Hitler’s politics of white supremacy. This interest in Black celebrity and achievement against a backdrop of racism, hostility and marginalisation is revisited by Basquiat throughout his career, for example in Hollywood Africans.

Another theme which emerges in this collection is that of a struggle between cohesion and anarchy, often centering on animal imagery. In Leeches, depictions of insects and parasites squirm clash anatomical drawings, text referring to chemical substances and figures of authority and power, suggestive of the eternal confrontation between the forces of ‘civilisation’ against an uncontrollable subterranean force. In Wolf Sausage and Dog Leg Study, we see depictions of dogs and canine body parts alongside sausages and other meat products, juxtaposing the perception of dogs as human-like against society’s treatment of animals as foodstuffs. These jarring contrasts are emphasised by the artist’s strident and clashing mark making, causing social contradictions to flash up unapologetically in the viewer’s field of vision.

A similar discussion of the struggle between the idea of societal advancement and an irrepressible and ambiguous reverse force is present in Ascent. Religious imagery alluding to resurrection (including an angelic figure floating upwards) collides with suggestions of death and inevitable destruction, evocative of a tension between earthliness and spirituality. Amongst these culturally-specific references, arrows pointing upwards and downwards acknowledge the same themes in a far more simplistic manner.

Jawbone Of An Ass