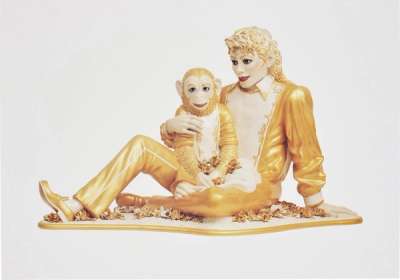 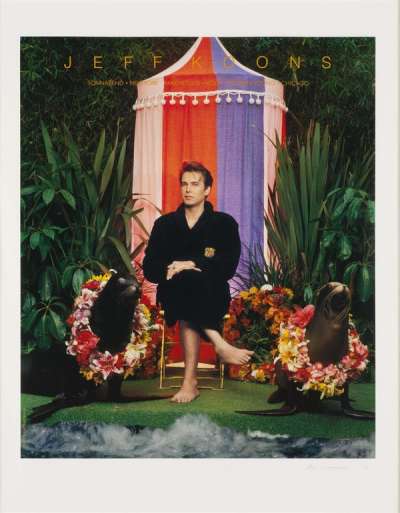 With this compilation of works, we are party to the controversy, notoriety, and celebrity that surrounded unabashed American artist and pop culture King, Jeff Koons, during the late 1980s. Comprising a series of images depicting self-promotional advertisements and an image of the artist’s famed Michael Jackson And Bubbles (1988) sculpture, this assembled series of works is both account and symptom of Koons’s relentless desire for fame and fortune during what was still a relatively early and formative stage of his career. Art Ads 2 (1988) and Michael Jackson And Bubbles (1995) are all prints that reference a 1988 series of works entitled Banality, which were unveiled to the public simultaneously at three different galleries in three different countries: the Sonnabend Gallery in New York City; the Donald Young Gallery in Chicago; and the Galerie Max Hetzler in Cologne.

The Banality exhibition saw Koons enlist the help of photographer Matt Chedgey, whom he tasked with portraying him in a series of highly staged and symbolic scenes. Each of these scenes referenced constituent elements of the artist’s alleged persona as reported by the mainstream media at the time. These images, which belong to the sub-series entitled Art Magazine Ads, were then used to attract interest in the exhibition ahead of its opening. In the print Art Ads 2, each of these images is visible. We see Koons with a Shetland pony and two women dressed in bikinis – an apparent reference to his reputation as a so-called ‘ladies man’; Koons sits cross-legged in front of a tent, flanked by two seals with garlands around their necks, in a tongue-in-cheek reference to a rumour that the artist was is in fact a male prostitute; in the remaining images, Koons stands in front of a blackboard inscribed with the slogans ‘Exploit the Masses’ and ‘Banality as Savior’, as well as with two pigs – a reference to his love of the ‘banal’. These images were published as full-page advertisements in a number of high-profile art magazines, including Flash Art, Artforum, Arts Magazine, and Art in America.

Expanding on the practice of ‘art fabrication’, of which Pop Artist Andy Warhol was a pioneer, the Banality exhibition largely comprised a series of porcelain sculptures created not by Koons himself, but by Italian and German workshops specialising in ceramic, porcelain, and wood. This collaboration between Koons and European craftspeople birthed a weird and wonderful assortment of sculptural images, each imbued with Koons’s provocative experimentations with pop and mass cultures. Michael Jackson And Bubbles remains the most famous piece from the Banality series; a kitsch representation of Michael Jackson and his pet chimpanzee, Bubbles, the gilded sculpture parodies Hummel figurines – mass produced porcelain ‘knick-knacks’ from Germany and Switzerland – and the world-famous sculpture by Italian Renaissance artist Michelangelo, the Pietà. Commenting on his motivation behind the pieces, Koons once said, “I was telling the Bourgeois to embrace the things that it likes, the things it responds to. For example, when you were a young child and you went to your grandmother’s place and she had this little knickknack, that’s inside you, and that’s part you. Embrace that.”