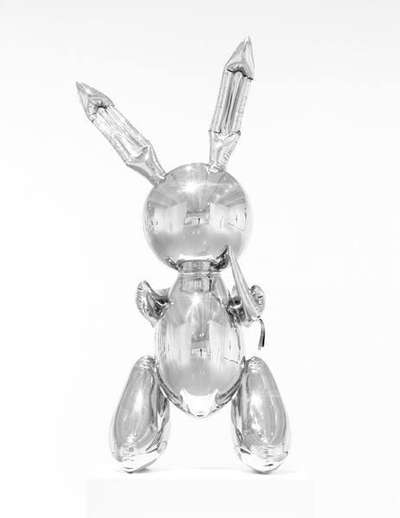 Since as early as the 1970s, American artist Jeff Koons has experimented with making sculptures directly inspired by inflatables and toys. An artwork created in this vein – and one of Koons' most famous – is Rabbit (1986). A sinister-looking aluminium cast of a rabbit-shaped mylar balloon, Rabbit realised an eye-watering auction price of over $91 million at Christie’s New York in May 2019. It was bought from the estate of Samuel Irving Newhouse Jr., a publishing magnate, by hedge fund manager and investor Steven A. Cohen, the owner of the ‘New York Mets’ baseball team. The story of the artwork is intrinsically linked to that of Romanian-American art collector, Illeana Sonnabend, who in 1986 commissioned Koons to take part in a group show to be exhibited at her New York gallery. For the exhibition, Koons produced a series entitled Statuary. Statuary comprises a number of tongue-in-cheek sculptures, each fabricated in stainless steel, which offer comment on both traditional European art historical motifs, and objects of contemporary popular culture.

Ever-present in the Statuary series is the influence of French artist and founder of the Dada movement, Marcel Duchamp. In 1913, Duchamp took a bicycle wheel and attached it to an everyday stool, wishing to see ‘how it turned’; a decisive moment in contemporary art history, this standout example of the artist’s direct engagement with the quotidian and pre-existing birthed the ‘readymade’: a work of art comprising ordinary manufactured objects which are then modified by the artist. The Statuary series deals explicitly with dichotomies and contrast. The sparkling (and glaring) bust of a French King, Louis XIV (1986), for example, juxtaposes royal glamour with stainless steel – a material Koons has often described as ‘proletarian’, or working class. Italian Woman (1986) recreates a similar feeling of grandeur, this time turning attentions towards sculptural motifs of the Renaissance period, as well as allegorical paintings and sculptures of the 18th century that used women as figurations of abstract concepts. Rendering the female form in steel, Koons seeks to combine the features of ‘high’ and ‘low’ art — a move which questions the designation of cultural works as such.

Often described as the ‘king of kitsch’, Koons also turns attentions towards the ‘everyday’ object, inverting the directionality of this détournement – or ‘re-purposing’ – in the process. Cape Codder Troll (1986) and Mermaid Troll (1986), for example, recreate souvenir-like objects in a shiny material associated with value and desirability. The statuette-like sculpture Bob Hope (1986) does similar, immortalising the British-American comedian in a composition somehow reminiscent of a much sought-after Academy Award. In a similar vein, Doctor’s Delight (1986) co-opts a crass and sexist novelty object and seeks to somehow elevate it. Reflecting both their audiences and surroundings, the shiny surfaces of these works themselves offer a self-referential performance of their cultural operation; when placed in gallery space, they assume a new meaning that serves to expose the contradictions suggested by their form. When read as such, the Statuary series serves as a precursor to Koons’ large-scale sculptures of the 1990s and 2000s, namely the artist’s Celebration series, which he began in 1994.