Find out more about the The New series, browse prints & editions for sale & view the works wanted by active buyers right now. 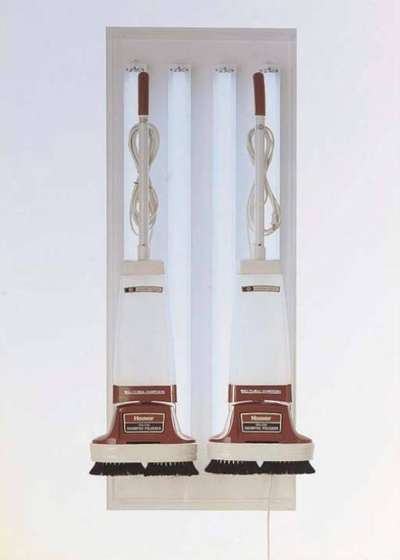 The New is a series by American Pop Artist and ‘king of kitsch’, Jeff Koons. With its origins in the late 1970s, the series is a well-known yet early component of Koons’ œuvre that quickly helped to establish the artist as a controversial figurehead of the contemporary art world. The works in the The New series essentially consist of pre-existing consumer objects including vacuum cleaners, on the one hand, to carpet shampooers, on the other. A self-professed ‘disciple’ of Andy Warhol, Koons was similarly inspired by mass consumer culture, which led him to select objects for his artistic creations according to their iconic brand names, such as Hoover. Once selected, Koons exhibited these objects in see-through boxes made from Perspex, creating a kind of show room within the confines of New York’s New Museum of Contemporary Art. At the centre of the objects stood a bold sign resembling a television mounted on a sideboard; at the centre of the screen stood the bold words ‘The New’ (1980). Thematically, the works maintain a close relationship to Koons’ conception of humanity; according to the artist, each of the seemingly banal pieces possess anthropomorphic qualities. Resembling lungs, sexual organs, and even mummified corpses, the works – often referred to as ‘the vacuum cleaners’ – serve to pass subtle comment on intrinsically ‘human’ themes, such as the nuclear family, sexuality, and death. As such, Koons argues, they are ‘individuals’.

Designed for cleaning, the objects that make up The New are somewhat ironically kept removed from the outside world by way of their transparent casings. As the print New Hoover Deluxe Shampoo Polishers (1993) reveals, this separation suggests Koons’ commentary on our relationship to novelty and consumer culture. As Koons himself argues, The New seeks to ask how contemporary society has come to revere simple objects such as these; Commenting on the series, he once said, “I don’t seek to make consumer icons […], but to decode why and how consumer objects are glorified.“ Beyond Warhol, a central inspiration for The New was French artist, Marcel Duchamp, who in 1915 coined the term ‘readymade’. A descriptor for some of the artist’s three-dimensional works, which took pre-existing consumer objects and subjected them to minor yet artful modifications, the appearance of the readymade was a decisive moment in contemporary art history.

Whilst assemblagist pieces such as New Hoover Deluxe Shampoo Polishers, New Shelton Wet/Dry 10 Gallon Displaced Tripledecker (1981-87) make thinly veiled reference to Duchamp, their art historical pedigree did little to boost their early performance with 1980s collectors. Over a period of 2 years, Koons only managed to sell 2 of his ‘vacuum cleaner’ works – once to London-based collector and early patron of Damien Hirst, Charles Saatchi. Buying new ‘readymade’ objects had proved expensive, so with profits waning the artist decided to start work as a commodities broker on Wall Street to bankroll the project. The financing of The New accords the series a further layer of philosophical complexity; with each work imbued with a sense of the aggressive selling techniques employed by corporations and the stock market during the 1980s, they are what Koons himself would call ‘objects of desire’.