Find out more about the Luxury And Degradation series, browse prints & editions for sale & view the works wanted by active buyers right now. 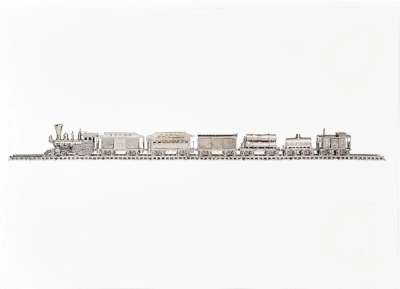 Following the critical success of the Equilibrium (1985) series, American artist Jeff Koons unveiled Luxury And Degradation, the second of his first major steps into the world of contemporary art. The series was initially conceived during one of Koons’ many trips on the New York subway, a subterranean space peppered by visual advertising. Fixated chiefly on the ironies of alcohol advertising, the series comprises two- and three-dimensional détournements of promotional campaigns led by major drinks corporations, including Gordon’s, Bacardi, Hennessy, and Jim Beam. Koons discerned that corporations such as these relied heavily on the device of abstraction as a means to trap consumers. As a counterattack to their aggressive sales techniques, Koons removed the corporations’ advertising objects from their subway surroundings, or, as in the case of the series three-dimensional components, cast them in ‘proletarian’ materials like stainless steel.Starting as he meant to go on, Koons’ use of a Duchampian philosophy which focused upon the readymade caused major controversy, with major news outlets lambasting the series as a cynical reappropriation of pre-existing objects. In 1993, Canadian-American news anchor Morley Safer took particularly fierce aim at Luxury And Degradation, which was enormously successful on the art market, commenting ‘there’s a sucker born every minute’.

First exhibited at the Daniel Weinberg Gallery in Los Angeles, the Luxury And Degradation series comprises two-dimensional advertisements, such as Stay In Tonight (1986) – an advert for Frangelico liqueur. Accompanying the series’s two-dimensional pieces are three-dimensional castings of collectible objects, including Jim Beam – J.B. Turner Train (1986), Jim Beam – J.B. Turner Engine (1986), or Travel Bar (1986). These works are immortalised in two-dimensional prints, such as Train (1995), a signed lithograph. One of the most well-known features of the series, Koons first spotted the Jim Beam train when walking down New York’s Fifth Avenue; originally made in plastic, Koons wished to take this ‘symbol of the middle-class’ and convert it into something more solid. To do so, he used the ‘working class’ material of stainless steel, before having Jim Beam fill each ‘wagon’ with their whisky. To top it all off, the train was then sealed with the same materials one would find on a Jim Beam whisky bottle. For two-dimensional pieces like I Could Go For Something Gordon’s (1986) or Find A Quiet Table (1986), Koons procured original printing plates from the agencies responsible for the advertisements’ creation, before printing the same images on canvas.

Luxury And Degradation has been hailed as emblematic of an important and formative period in Koons’s early career. Koons was sure to attach a certain meaning to these seemingly banal commodity objects and advertisements, despite his continued assertion that his work contains no ‘hidden’ critiques. The objects’ deeper significance was rooted in Koons’ belief that their re-appropriation – or literal ‘re-casting’ – would be somehow beneficial to a gallery audience. By enabling the viewer to see through the false promises of advertising, Koons argued, his work empowered them. The emancipatory powers of the Luxury And Degradation series is an echo of the 1985 series, Equilibrium. Created in 1985 and exhibited at the New York Gallery, the Equilibrium series was Koons’ breakthrough moment, and placed empowerment at its centre. Commenting on the series, a simultaneously straightforward and ambiguous Koons stated, “these works are about enjoying life, about enjoying the opportunities we have to reach our full potential.”