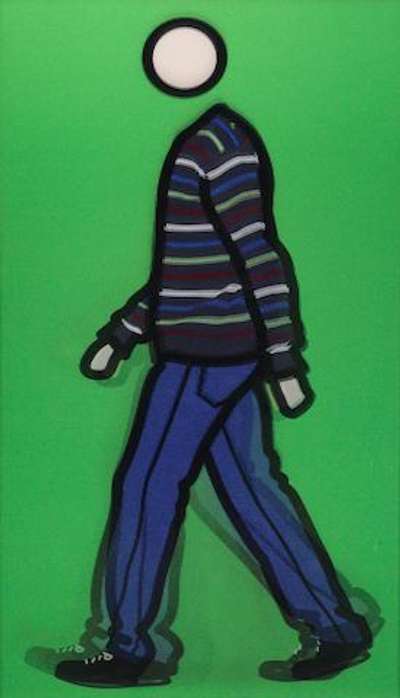 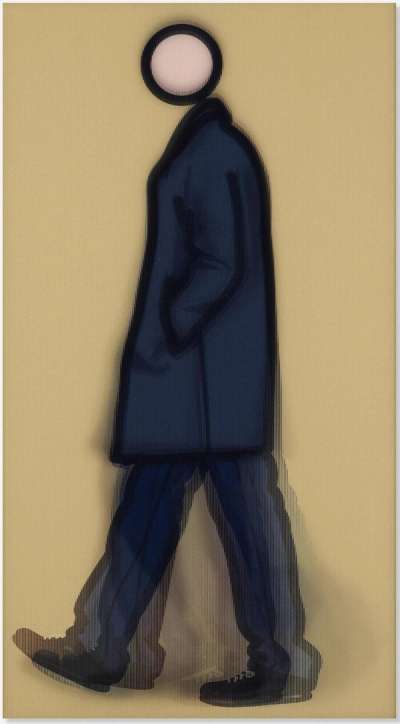 Produced in 2010, Jeremy is a collection of prints made by the renowned British artist Julian Opie in 2010. The prints in the collection all show a man, captured from side-on, walking across the composition. The man is rendered in Opie’s distinct visual style, characterised by his use of thick, black outlines filled with blocks of colour and simplified shapes.

The man depicted in Opie’s Jeremy collection is faceless and his head has been replaced by a circle that hovers above his shoulders. All his features and distinguishable characterised are reduced to simplified forms, yet a sense of individuality remains due to the skilful way in which Opie captures the man’s gait as he strides across the artwork.

The Jeremy collection can be seen alongside various other collections produced by Opie which feature anonymous figures walking. Opie always captures these subjects in full-length, caught as they are mid stride, with their surroundings omitted in favour of a block colour background. Although Opie extracts his subjects from their environment, removing any visual contextual information as to their surroundings, the viewer of the print can often infer where they are walking from the print’s title or the clothes they are wearing. Notable other collections made by Opie which feature figures walking include Walking In The Rain, Walking In London and Walking In Melbourne. Another collection, the Street collection, features people from a variety of different professions captured in transit walking to or from work. The Jeremy collection along with these other collections capture the variety of people one might encounter while strolling through a city.

As is seen in this collection, Opie’s artworks often appear flat and lacking in depth and the use of simplified shapes and block colours produce a one-dimensional effect. Opie’s style is influenced by Minimalism and Pop Art and traces of Roy Lichtenstein’s comic book imagery and cartoon characters, as well as Andy Warhol’s highly commercialised style of portraiture are apparent throughout Opie’s oeuvre.

Walking In The Rain