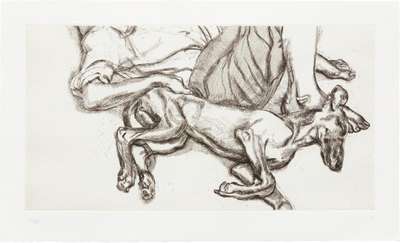 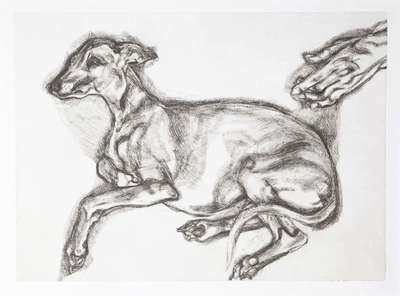 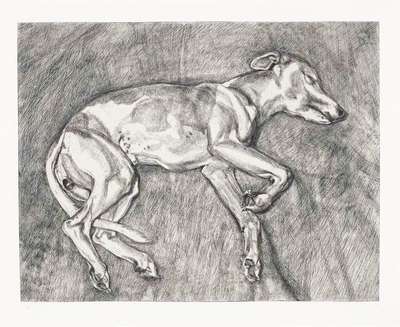 Throughout his long career, Lucian Freud was considered a "recluse", often refusing to be interviewed and opting to depict mainly those he knew and trusted. During this dizzying life as an artist, however, one thing was constant, and that was the presence of Freud's adored dogs. Even though his relationships with his many wives, lovers, and children were sometimes tricky, Freud always rubbed along well with his dogs. Not only were the canines beloved companions to Freud, but they were also a great source of inspiration in his art and some of his most regular sitters.

They often say that dogs are similar to their owners and, for Freud, this rings true. His breed of choice was the whippet, a dog originally bred for hunting and racing. Despite their agile and speedy nature, they are also renowned for their relaxed demeanour, spending most of their lives mooching around and sleeping. It was perhaps their languid character that drew Freud to the breed, and made them a suitable pet to live in the artist's studio and pose as un-fidgety sitters. Freud himself once professed his love for the animals, saying: "I am impressed by their lack of arrogance, their ready eagerness, their animal pragmatism". It is almost as though Freud was describing himself here. He himself was a quiet and contemplative man, but with the potential to possess a great fervour when at work and under the right inspiration.

Even though Freud owned a few dogs over his lifetime, often using them in portraits with human sitters to relax them, two whippets in his studio seem to be the most beloved by the artist: Pluto and Eli.

Given to Freud by a close friend in 1988, Pluto quickly became one of his most treasured companions. Throughout the lifetime of this dog Freud drew, painted, and etched Pluto to document his growth, and capture the affinity between man and his dog. His etching Pluto depicts the dog as a puppy shortly after he was first gifted to Freud. The little pet is pictured curled up asleep, likely next to Freud's friend and erstwhile lover Susanna Chancellor. Pluto Aged Twelve depicts the elderly dog towards the end of his life, with a loving hand (perhaps Freud's own) reaching from the top of the composition to tenderly comfort the old dog. So important was this dog to Freud and his family that his daughter, Bella Freud, used an image of Pluto as the logo for her eponymous fashion label - as we see in Bella In Her Pluto Shirt.

After the death of the much-loved Pluto, Freud was unsurprisingly left rather forlorn. Not long after, Freud gifted his assistant and close friend Dawson with another whippet, Eli, who also enjoyed most of his time in Freud's studio. Eli depicts the young whippet asleep on a sofa, showing Dawson's dog to be another important companion to Freud towards the end of his own life. This was made manifest in Freud's final painting, Portrait Of The Hound, which pictures Dawson nude with Eli lying on the ground to his left. Freud worked on this portrait in the weeks preceding his death, and Eli's figure remains unfinished, making this one last endearing snapshot of two dear friends.