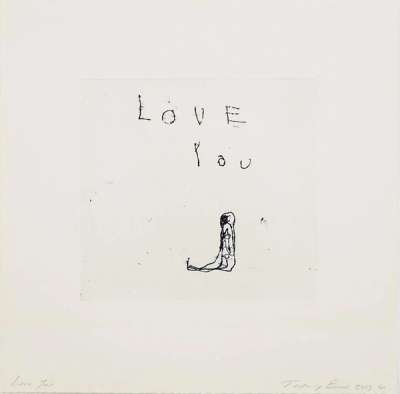 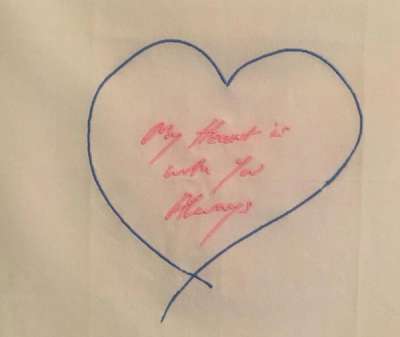 My Heart Is With You Always Signed Print
Tracey Emin 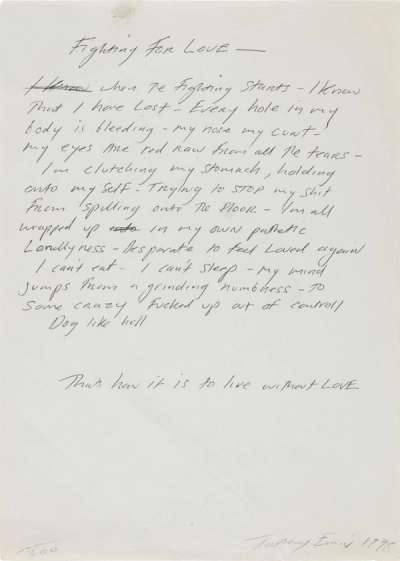 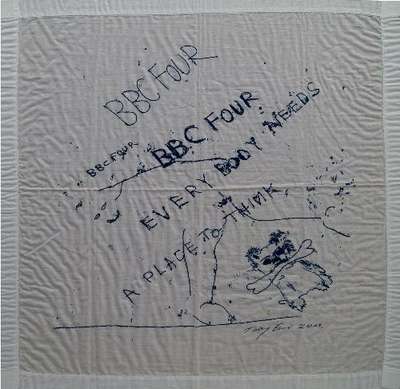 Everybody Needs a Place to Think Mixed Media
Tracey Emin

That of Tracey Emin is an art of full disclosure. Her practice, which spans across painting, installation, photography, printmaking and writing, brings her life to the foreground of the artwork. Her works are viscerally intimate and vulnerable and make use of a highly diaristic and unapologetic style where the artist pours her emotions onto the surface of the piece. With such a confessional quality distinctive of her works, it comes as no surprise that Emin would turn to writing in her practice and that she would do so in such a way so as to weave together her unconditional dedication to printmaking and needlework.

The works included in this series present to the viewer, in one form or another, Emin’s own handwriting. While works like Fighting For Love consist of rather lengthy letters written by the artist, others like Be Faithful To Your Dreams present an embroidered handkerchief where Emin wove her traditionally laconic, succinct and direct statements, distinctive also of her Neon Works. Instead, works like Everybody Needs A Place To Think, visually translating the chaotic allure of many of Emin’s drawings.

All the works have very interesting histories to them, each attesting to a different moment in her life and reflecting a different stage in her career. Fighting For Love, for instance, has been defined as one of Emin’s manifestos. Made in 1998, prior to Emin’s 1999 Turner prize nomination that put her on the map of the international art market, this work reflects on Emin’s feeling of loneliness and loss, ending with the words “this is how to live without love”. In Be Faithful To Your Dreams, Emin has now become more hopeful and optimistic. The work was made on commission for MOMART for their traditional Christmas Card, distributed every year by the art handling company and commissioned a work to a distinguished artist. In Everybody Needs A Place To Think, Emin was asked by the BBC Four to create a piece to accompany the invitations to their launch party. The handkerchief bears the words BBC Four three times, whilst on the right corner a dog hangs on to his bone.

These works best bring to life Emin’s voice, some highlighting her ironic wit and dark humour, which animates many of her artworks, whereas others convey Emin’s ability to be fragile and vulnerable in her art, a quality which has earned her the affection of the public.