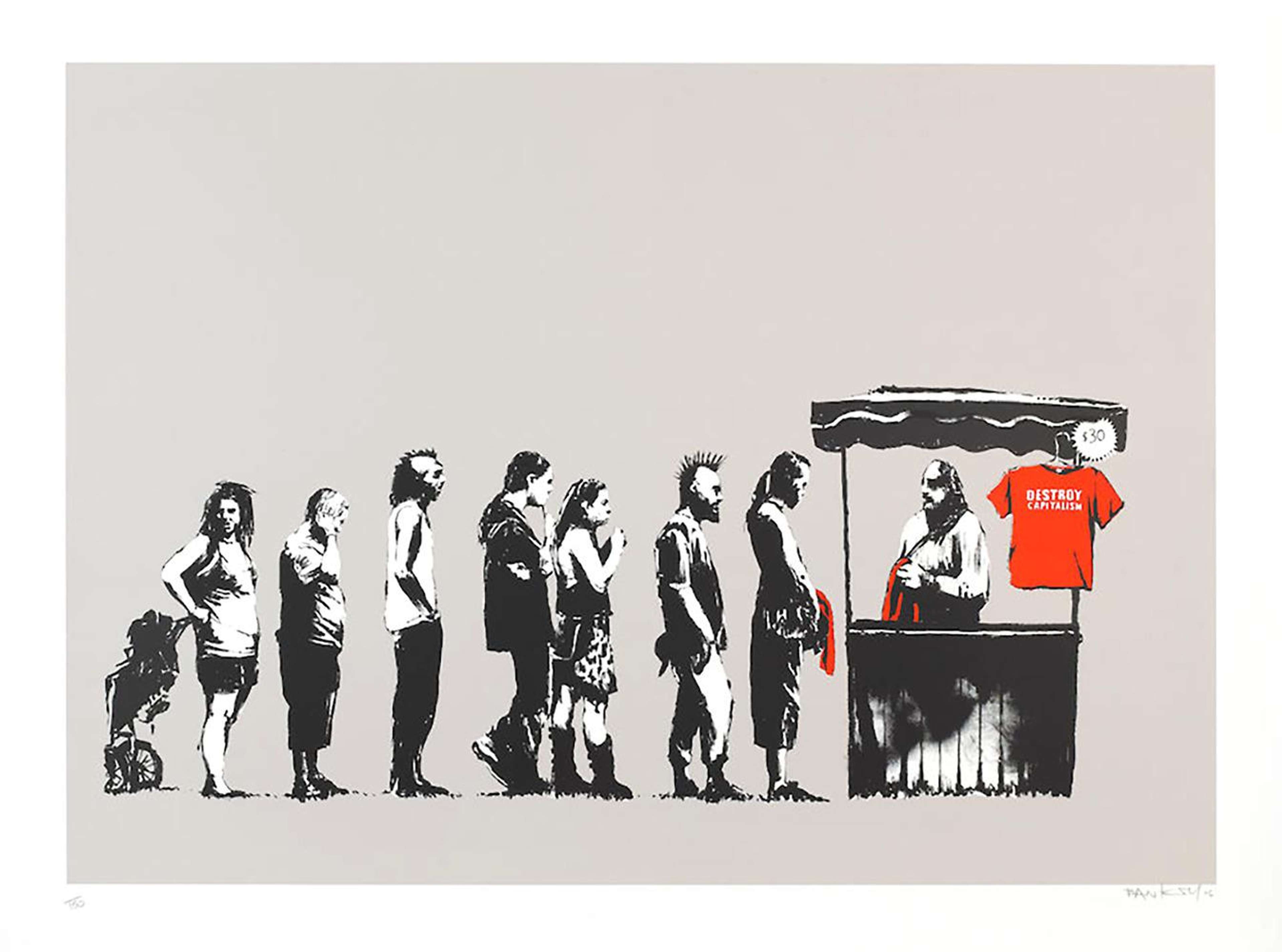 A satirical mockery of those who subscribe the mass-produced, mainstream culture, this Banksy Print remains relevant.

What is the meaning of Banksy’s Festival?

Resisting capitalism is futile, claims Banksy. In his print Festival, a line of customers queuing up to buy a ‘Destroy Capitalism’ t-shirt are dressed like punks, goths and hippies – all subcultures that actively rally against mainstream capitalist culture – yet they are, ironically, willing to pay $30 for the t-shirt.

Banksy seems to say that even these nonconformists have been tricked into supporting the system, or were never nonconformists at all. Likewise, he suggests that formerly independent music festivals like Glastonbury have been assimilated into mainstream culture, and subcultures like punk no longer seem as rebellious as they once were.

Festival has an alternative title

Like many of Banksy’s prints and murals, Festival has more than one title: the second is Destroy Capitalism, taken from the slogan printed on the featured t-shirt. This second title directly conveys the anti-capitalist message behind the print.

Banksy’s Festival print was first released at his momentous Barely Legal exhibition in Los Angeles in 2006. Visitors had the chance to buy a special portfolio called Barely Legal (LA Set), which contained Festival, Grannies, Applause, Sale Ends, Trolleys, and Morons. Although 500 unsigned prints were made for each series, only 100 were released for the exhibition. This makes the Barely Legal prints among the artist’s rarest and most sought-after editions, and even more valuable when sold as a complete set.

After Barely Legal closed, Los Angeles-based printers Modern Multiples were ordered to destroy the plates for the six prints, so they could never be reproduced without the involvement of Banksy’s UK-based printer at the time, Pictures On Walls.

With Festival, Banksy shows the power of advertising

Banksy has a gift for subverting a slogan. Slogans, jingles and advertisements are the bread and butter of the big corporations that Banksy often ridicules in his work, and it is these words that he so easily manipulates to reveal their hollowness. In Festival, the punchy t-shirt slogan serves an ironic purpose: it advertises the destruction of capitalism but, in reality, offers a way to buy into it.

Many other Banksy prints turn well-known slogans on their heads, including Very Little Helps, which is a spin-off of Tesco’s tagline ‘Every Little Helps’ and depicts three children pledging allegiance to a Tesco carrier bag flag.

What is the highest auction sale price for a Festival print?

The first release of Festival prints sold for just $500 a piece, but recent sales of the artwork have achieved six-figure sums. In March 2021, a signed Festival artist proof sold for £126,000 with fees at auction, more than four times its low estimate and the highest price paid for a print in the Festival series. Only 17 artist proofs of Festival exist, compared to 500 unsigned and 150 signed prints.

In an unintentionally ironic move, multinational retail chain Walmart sold canvas prints of Banksy’s Festival in 2013, for up to $868.99, through their third-party vendors Wayfair and PlumStruck.

They also mistakenly attributed a work by street artist Eddie Colla, featuring the words “If you want to achieve greatness, stop asking for permission” to Banksy.

In retaliation to Walmart for selling his art, Colla changed his work If You Want To Achieve Greatness, Stop Asking For Permission (mistakenly attributed to Banksy by the retail giant) to instead read, "It’s Only Stealing If You Get Caught, along with the tagline “Glorified Vandalism Available Now at Walmart”.

Walmart has since stopped stocking both their Banksy and Colla knockoffs.

Banksy has arranged his own festival

In 2008, Banksy organised the Cans Festival, a street art festival in London that takes its name from the Cannes Film Festival. The event took place in a tunnel on Leake Street, which was once used by Eurostar. Forty street artists from around the world attended and created artworks, including Blek le Rat, C215 and Ben Eine.

Banksy left a controversial installation at a real festival

In 2007, Banksy left an artwork at Glastonbury Festival of a replica of Stonehenge, a Neolithic monument in Wiltshire (roughly 40 miles from where Glastonbury Festival is held), constructed out of portable toilets. The piece, titled Boghenge, has been interpreted as a comment on the throwaway culture of festivals and the turning of historic sites into mainstream money-making machines.

Festival shows Banksy as a master of irony

Banksy often takes a powerful statement about war and social justice and flips it on its head to make the meaning even more striking. In Festival, the irony comes from how willingly these self-declared ‘anti-capitalist’ festival-goers will pay a premium price for a mass-produced t-shirt.

But, in essence, the popularity of Banksy’s work is ironic too: every time one of his anti-establishment prints is sold, the sale feeds into the capitalist system the work criticises. This is best seen in his print Morons, which lampoons both the auction houses that sell his work and the buyers bidding astronomical sums for it.