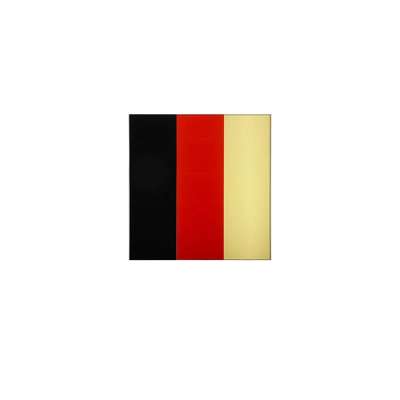 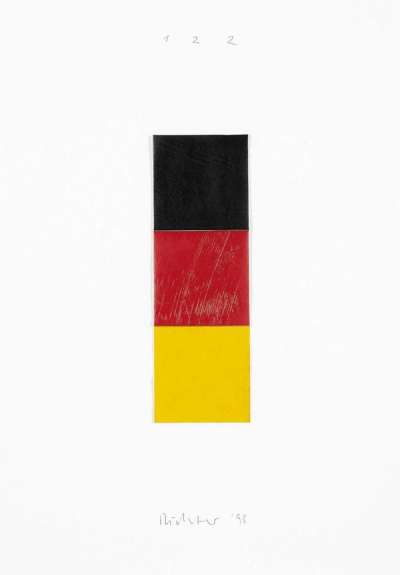 Gerhard Richter is perhaps the most prominent German artist of the 20th and 21st century. Able to transition between a precise, photographic level of representation on the one hand, and a looser, more abstract approach on the other, Richter’s unconventional art defies simple categorisation. Commenting on his anti-establishment attitudes towards art history, and his own painterly style, Richter once commented: ‘it was the only way to get rid of this heavy tradition […] to make new things that are more interesting’. An extension of his deconstructive approach, the Black, Red, Gold collection is concerned with a key work in Richter’s oeuvre, entitled Schwarz, Rot, Gold (Black, Red, Gold) (1999). A 204-meter sculpture cast in glass and enamel, it is an ode to the three colours of the German flag: black, red, and gold.

Schwarz Rot Gold 1 (1998) and Shwarz Rot Gold IV (2015) are associated studies for the site-specific sculptural work, a symbol of German Vergangenheitsbewältigung – or ‘working through the past’ – that now hangs in the Reichstag (German Parliament) in Berlin. Commissioned to accompany the Reichstag’s pioneering redevelopment by world-famous architect Norman Foster in 1999, the artwork is a imbued with a sense of national optimism, brought forward by German reunification in 1991. Hanging in a building whose burning in 1933 actively enabled the Nazi seizure of power, the work’s simple-yet-effective qualities are manifest in these prints. Eliding the iconography of the German flag with the emotional qualities of colour, these works are endowed with a sense of transcendence and historical importance.

Richter is no stranger to the themes of historical remembrance and reflection: countless examples of his work tackle these themes head-on. The 1988 series 18. Oktober 1977, for example, deals explicitly with the traumatic legacy of the infamous Rote Armee Fraktion (Red Army Faction) - commonly known as the Baader-Minehof Gang - a terrorist group active in West Germany during the ‘70s, ‘80s, and ‘90s.