A Guide to Julian Opie's Landscapes 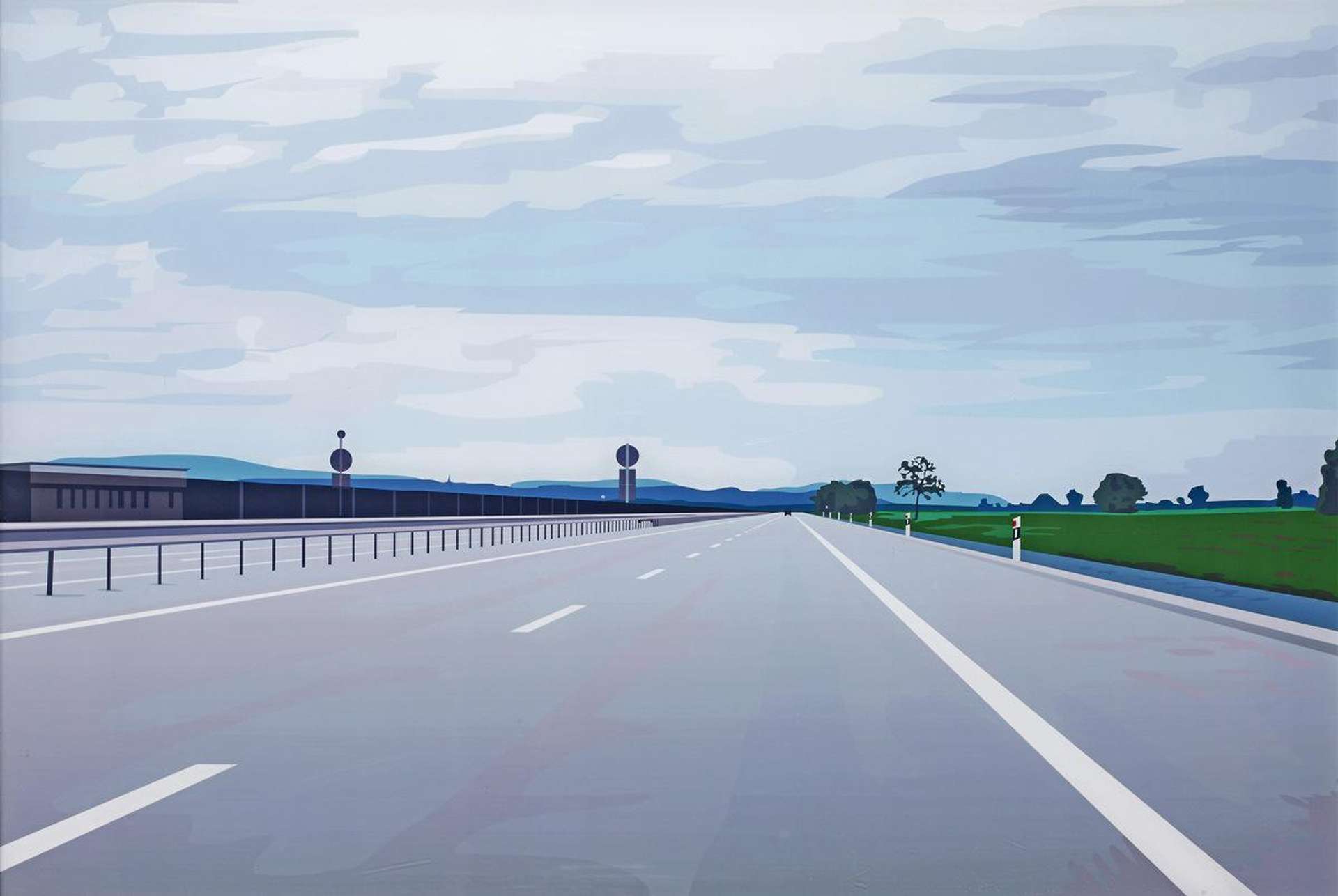 Julian Opie’s landscape prints are a central part of his prolific oeuvre, though are often overshadowed by his iconic portraits.

Born in London in 1958, Julian Opie rose to international fame in 2000. Commissioned to create the cover art for a ‘best of’ album by Britpop legends, Blur, Opie — and his unique, pared-back visual style — quickly became a defining feature of British visual and popular culture at the time of the ‘new Millennium’.

Along with the likes of Anish Kapoor, Anthony Gormley, and Rachel Whiteread, Opie is often considered a proponent of the New British Sculpture movement of the late 1990s.

Experimenting with traditional media, such as painting, installation art, and the creative possibilities of digital and computer aided design technologies, Opie is best known for his minimalist nudes and walking scenes. The artist’s fascination with movement has seen him use LED screens as means to exhibit his dynamic artworks.

In this article we take a closer look at Opie’s landscapes and the thinking behind them. 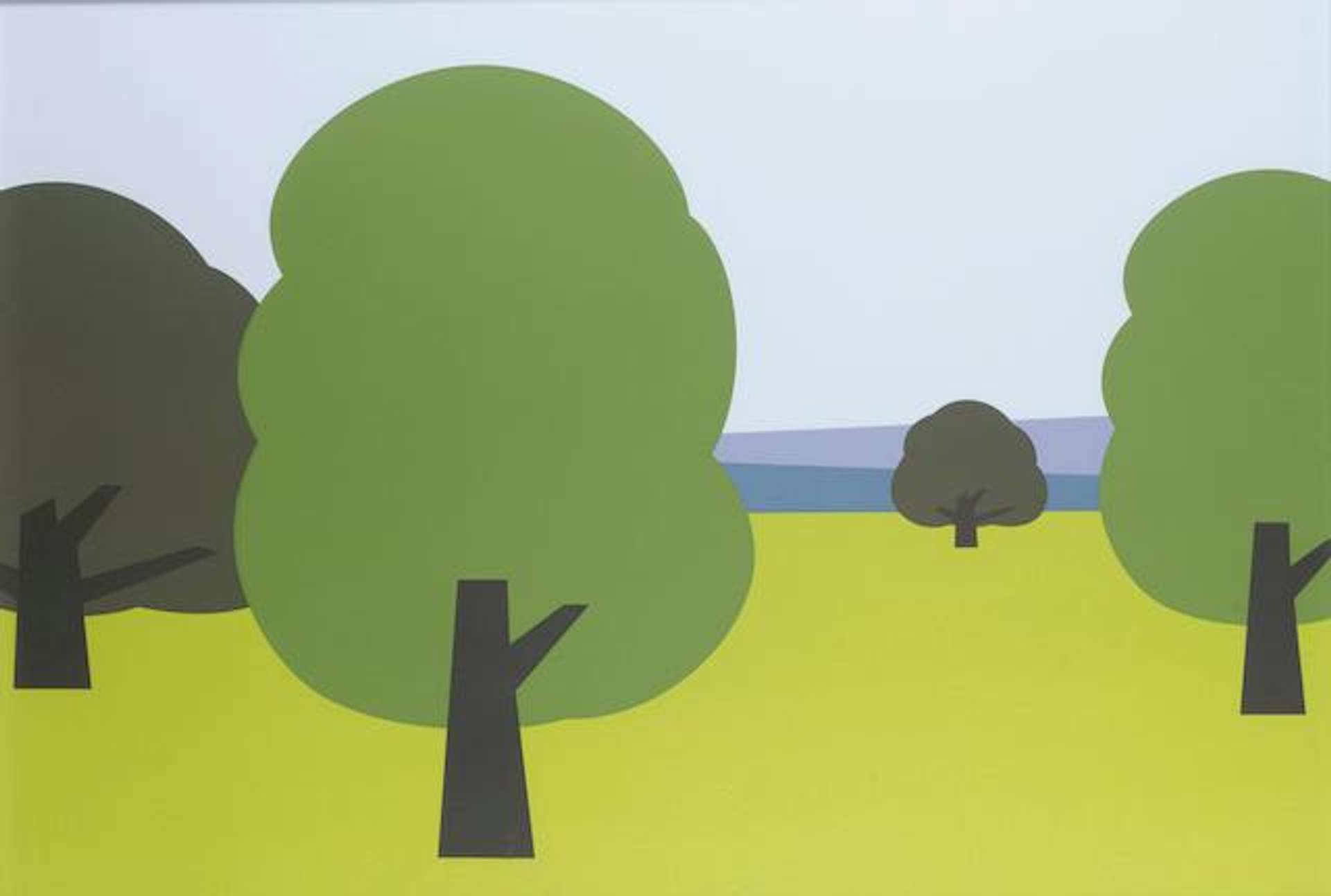 Commenting on his portrait-focused artistic practice, Opie once commented, ‘I have been drawing people for quite a long time, and I’ve been drawing an awful lot of them, and I don’t quite understand that. Sometimes I react against it, I come back from holiday and think ‘ah, that’s enough, all these people’. Surely, I could be doing things with other elements?’

For Opie, these ‘other elements’ constitute a departure from portraiture.

Since as early as 1997, the artist has produced muted, minimalist, and reflective landscape-based pieces that aim to convey a sense of both the natural environment, and its dramatic encounter with the man-made.

Landscape? (1997-1998) is a standout example of Opie’s first forays into landscape work, and one of his first-ever screen prints. Simplified and deconstructed, it is concerned with the hard-edged, graphic portrayal of one of art history’s most important motifs: the tree. The work is made from hand-cut stencils and based on Opie’s own photographs, digitally altered on a computer. 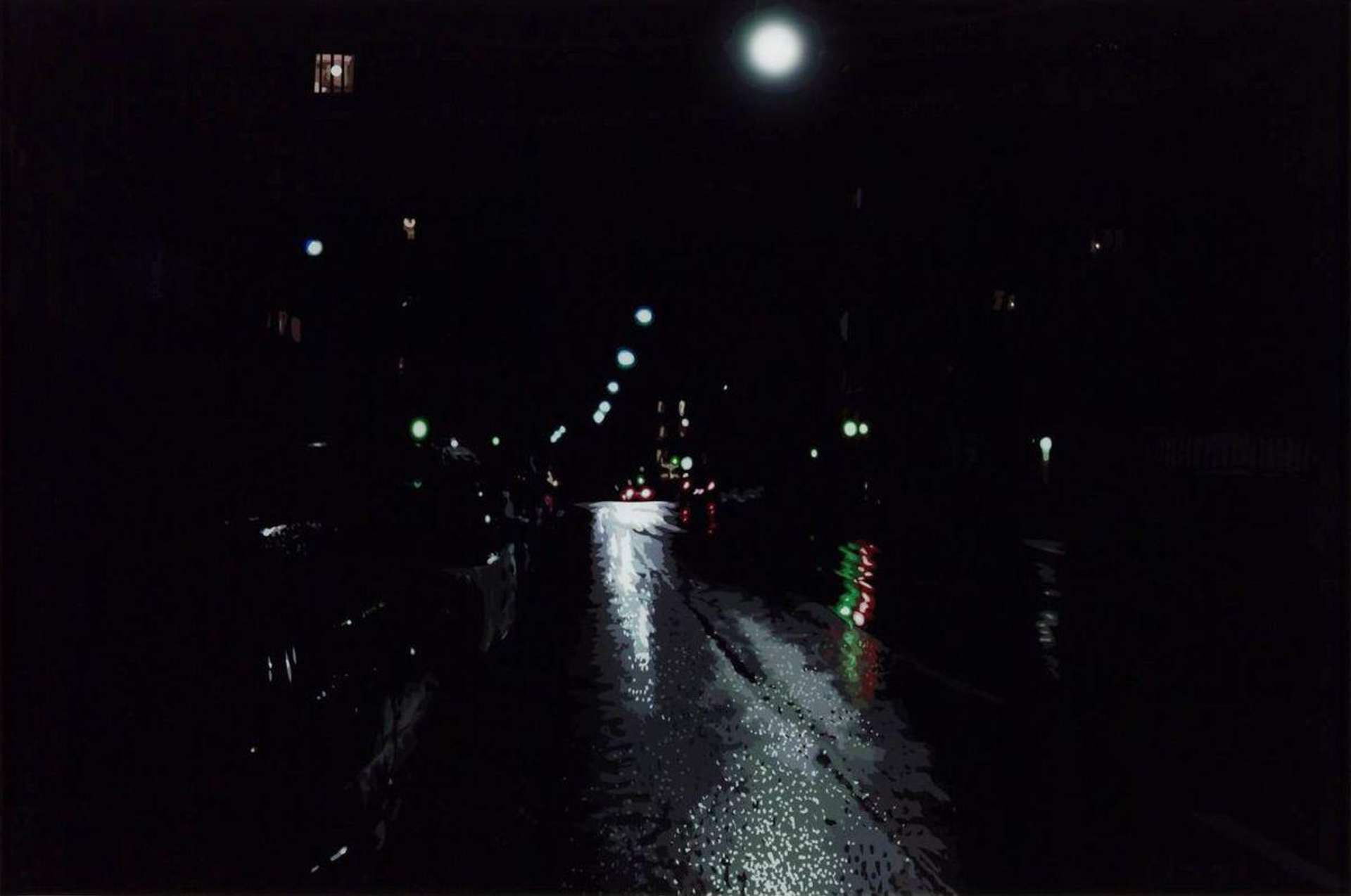 In 2000, Opie returned to painting, creating landscapes for his Eight Landscapes series. In these works, Opie tackled a variety of terrains, both urban and rural, as well as several interior scenes.

In the expansive Cowbells Tractor Silence (2009), for example, a bucolic, pastoral foreground gives way to the imposing presence of snow-capped mountains, mimicking the eyes vision.

In Rain Footsteps Siren (2000), by contrast, the pitch-dark of the night is pierced by the disturbing presence of anthropogenic street lighting; the cold, damp ground of a city street glistens with a stunning level of realism.

When exhibited, these two-dimensional artworks were accompanied by sound systems, which played the ambient sounds described by their titles. These titles were displayed alongside the artworks on bespoke LED panels.

This series comprises six prints inspired by a trip to Japan. 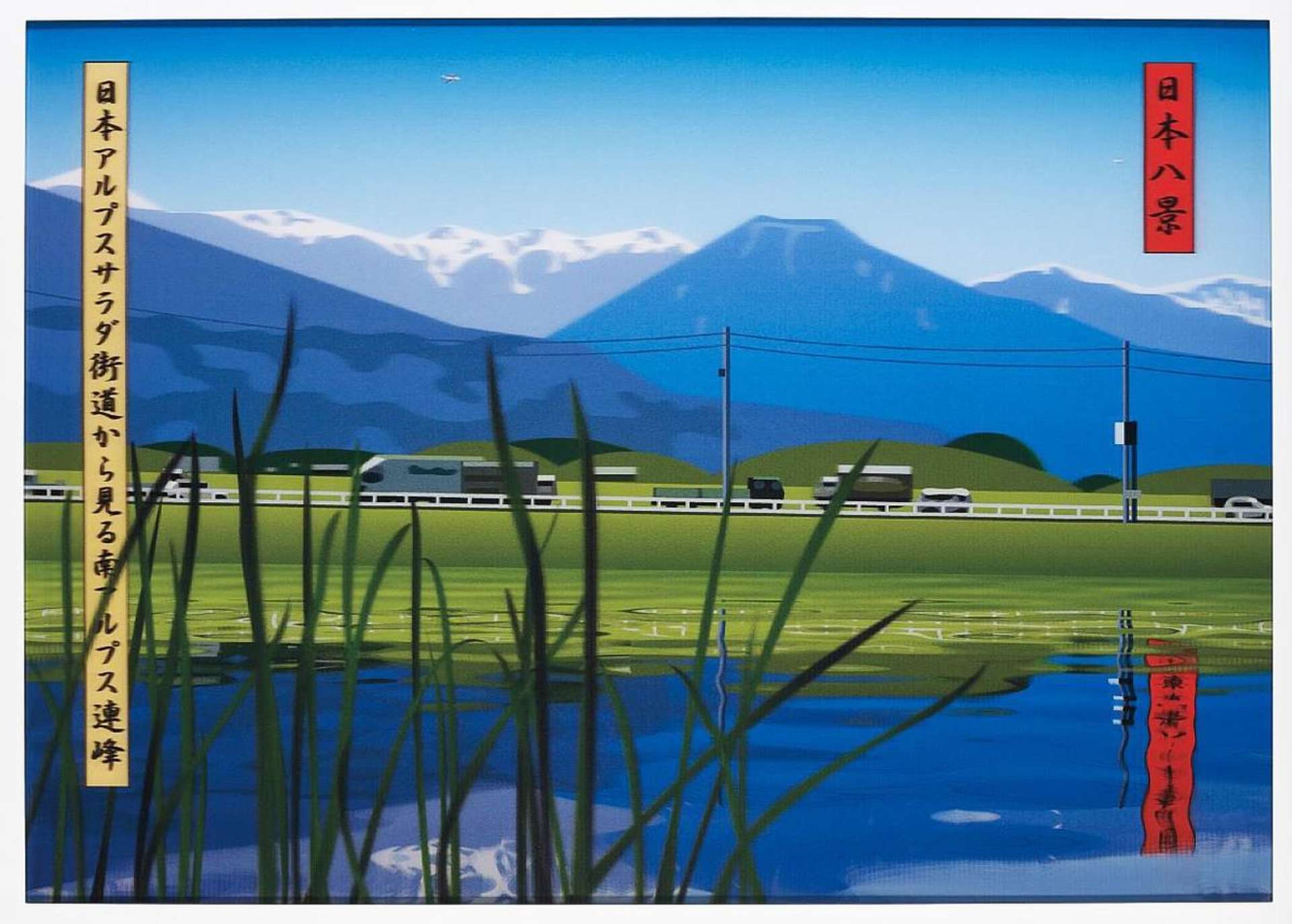 Pieces such as View Of The Mountains From The Nihon Alps Salada Road (2009) make thinly veiled references to Japanese art history, namely the ukiyo-e genre and the likes of Hiroshige and Hokusai.

In a similar vein to these canonical works of Japanese origin, Opie’s Japanese Landscapes play with perspective; recalling Hokusai’s Thirty-Six Views Of Mount Fuji, they aim to give a greater visual understanding of the territory they are trying to portray.

More precisely, though, they form part of a unique, philosophical approach to the natural landscape, which Opie has sought to develop.

This goal – of representing a subject that is both specific and universal – reached the high-point of its development with the Winter (2012) and Cornish Coast (2017) series.

His unique approach, argues Opie, calls for a rigid set of rules:

‘You can’t have a building, you can’t have a tree, because that would be too specific. It has to be some kind of image or language that could cover a whole day’s travel, a whole week’s travel, perhaps.’

Opie has described his creative process as an additive one. Always beginning with a blank surface, he builds up layers of block colour with the view to capture the ‘essence’ of the scene he is trying to depict. This method works to counteract what he calls the ‘domination’ of the camera and the photographic.

This ‘catch all’ approach is linked to what the artist has described as ‘commodification’.

Rather than a visual translation of any personal, subjective experience, Opie’s images are purposefully ‘depersonalised’; made ‘accessible’ to all, and so devoid of specificity, they assume the form of a commodity — a ‘product’ that allows the viewer to embark on their own unique imaginative journey.

Part of the inspiration for Opie’s theory of ‘commodification’ comes from an unexpected source: children’s railway sets.

In their simplicity, the artist’s landscape artworks mimic the blurred scenery owners of model railway sets could once buy to provide a ‘background’ for their own locomotive creations.

Extensive train travel in Europe has served as an important source of inspiration for Opie’s landscapes which, he confesses, are fuelled by a ‘desire for escape’. 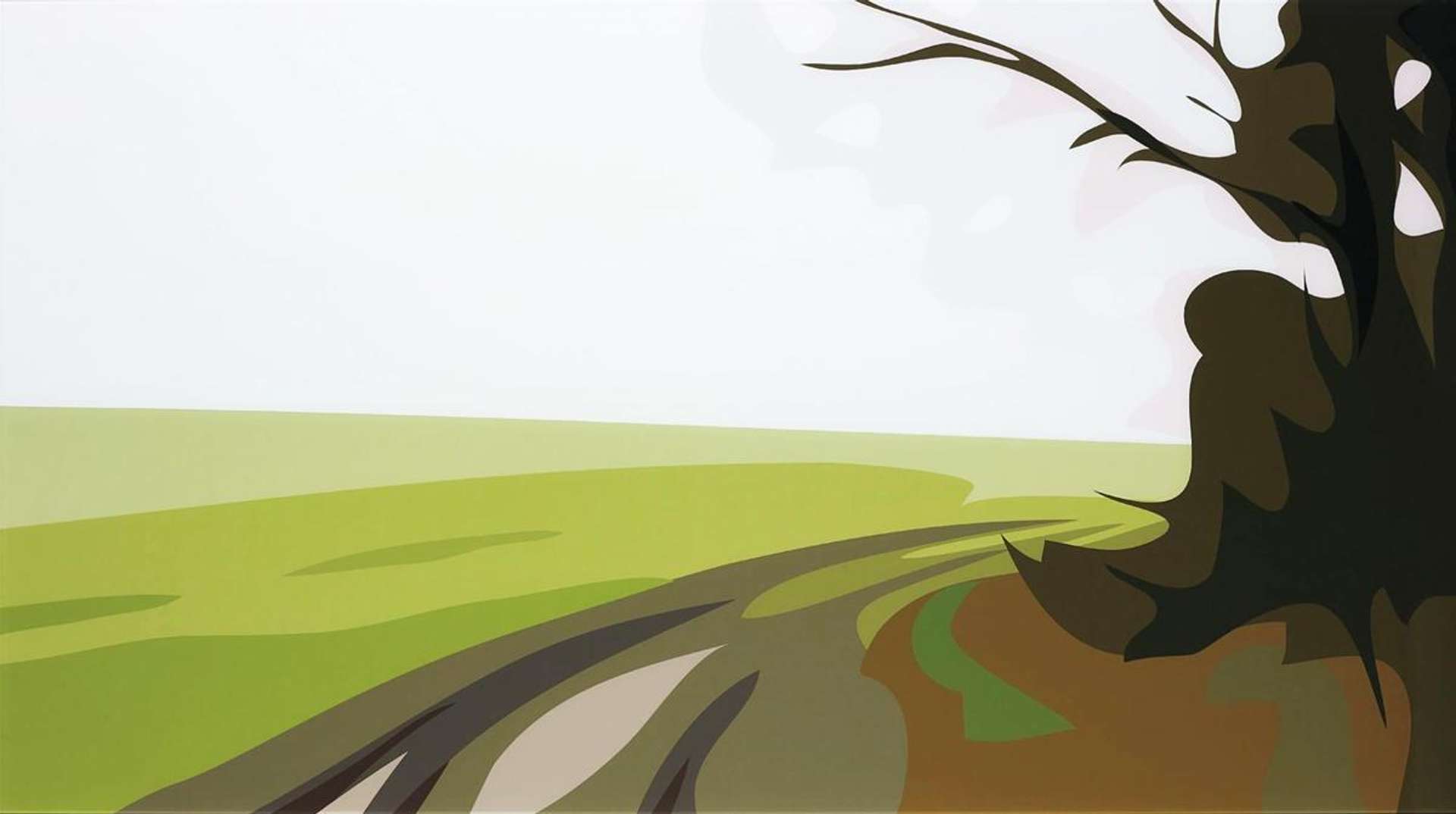 In the grand scheme of Opie’s œuvre, however, the portrait is never far away.

In the Imagine You Are Driving (Fast) series, produced in 2002, Opie evidences a composite approach to making images that is central to his way of seeing and thinking the world. The need to bring different visual elements together to form a whole is another important part of Opie’s practice.

Commenting on producing art, Opie has said, ‘making a picture, making an artwork, making something to look at… it’s a bit like cooking, in a way. You’ve got a lot of ingredients and it’s all about how you put them together.’ 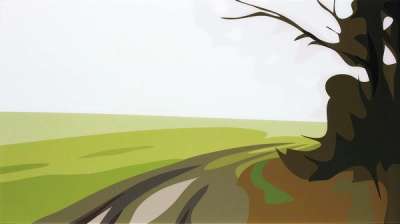 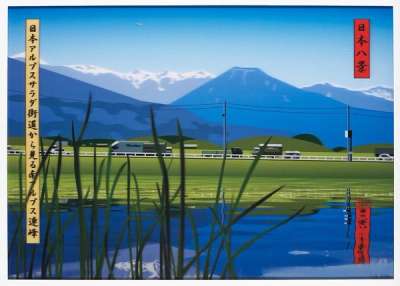 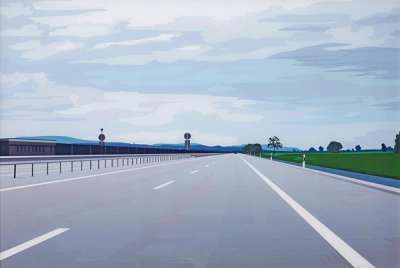 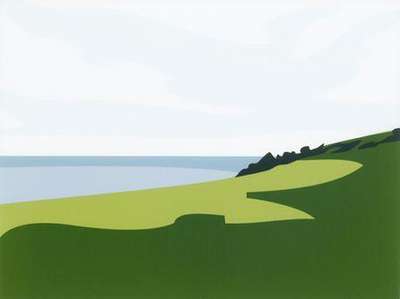 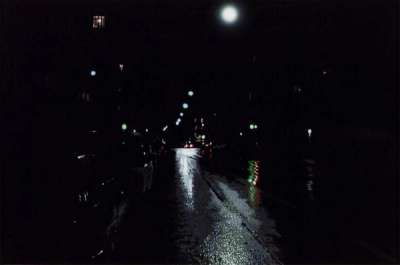 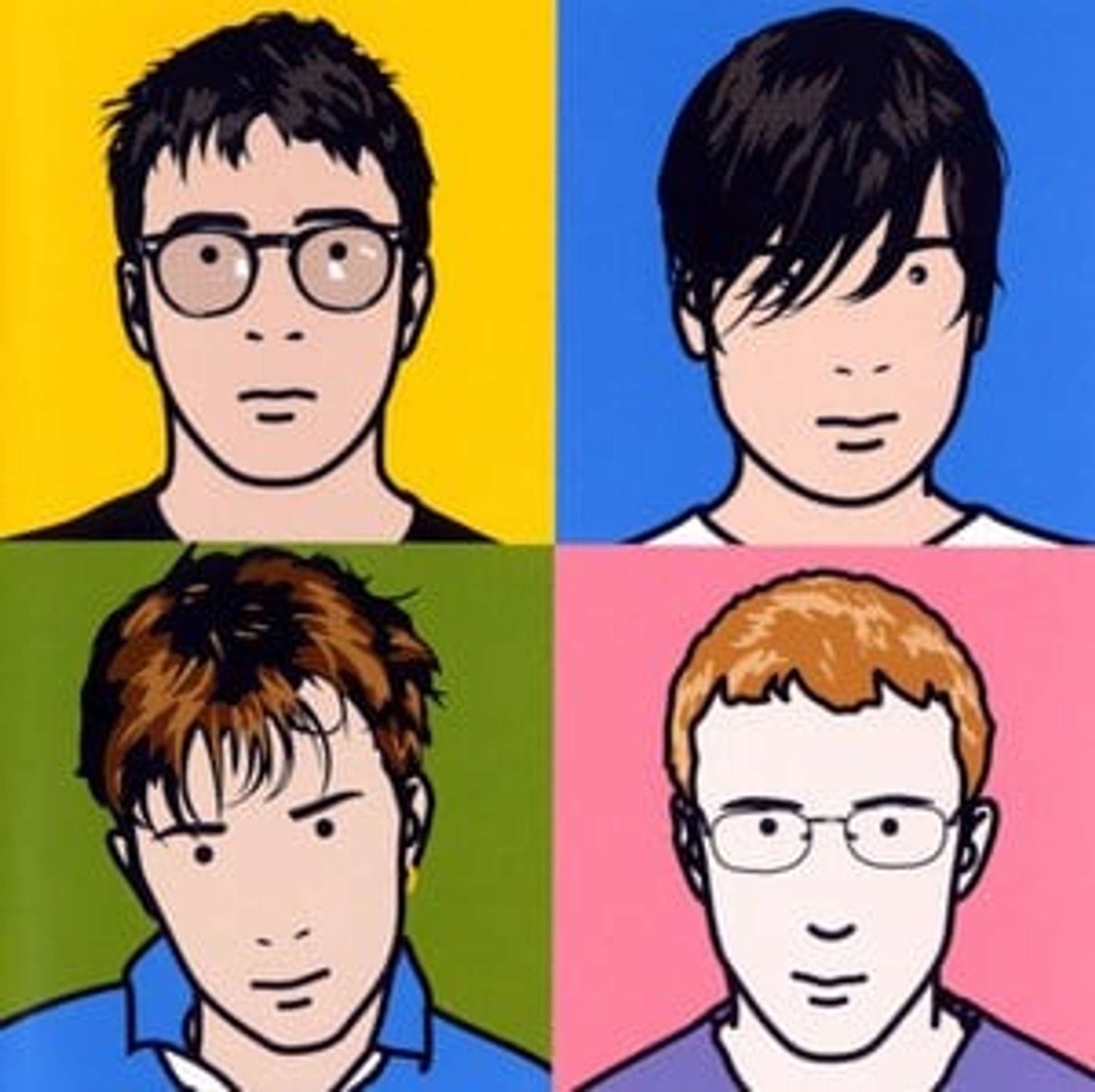 Combining minimalism with Pop Art in a strikingly contemporary style, Julian Opie has been making work that resonates with art lovers across the world for over two decades. Here we take a look at his... 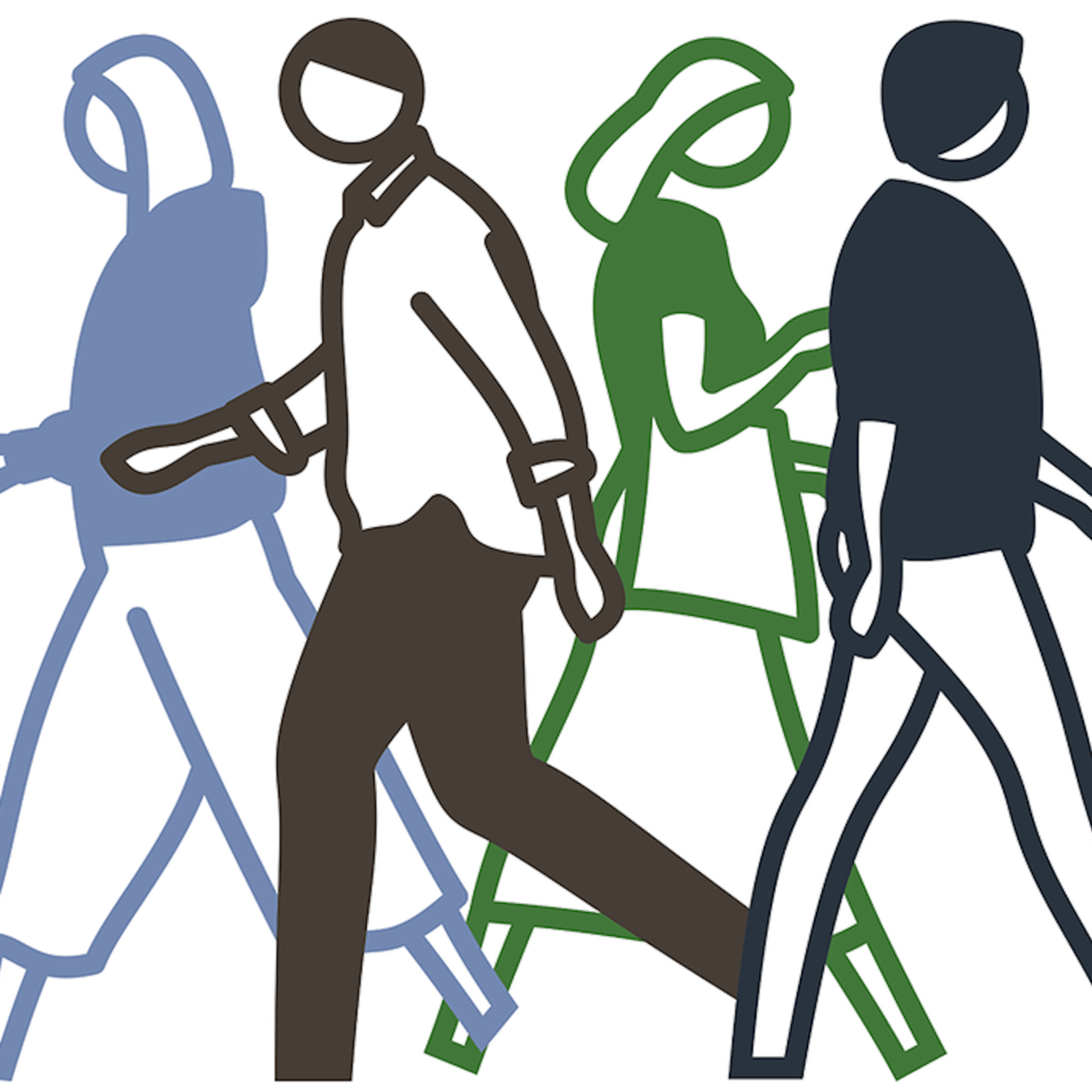 Often characterised by its minimal or cartoonish style, Julian Opie’s work belies his ongoing dialogue with the history of art and the range of techniques he has been honing since he left art school i... 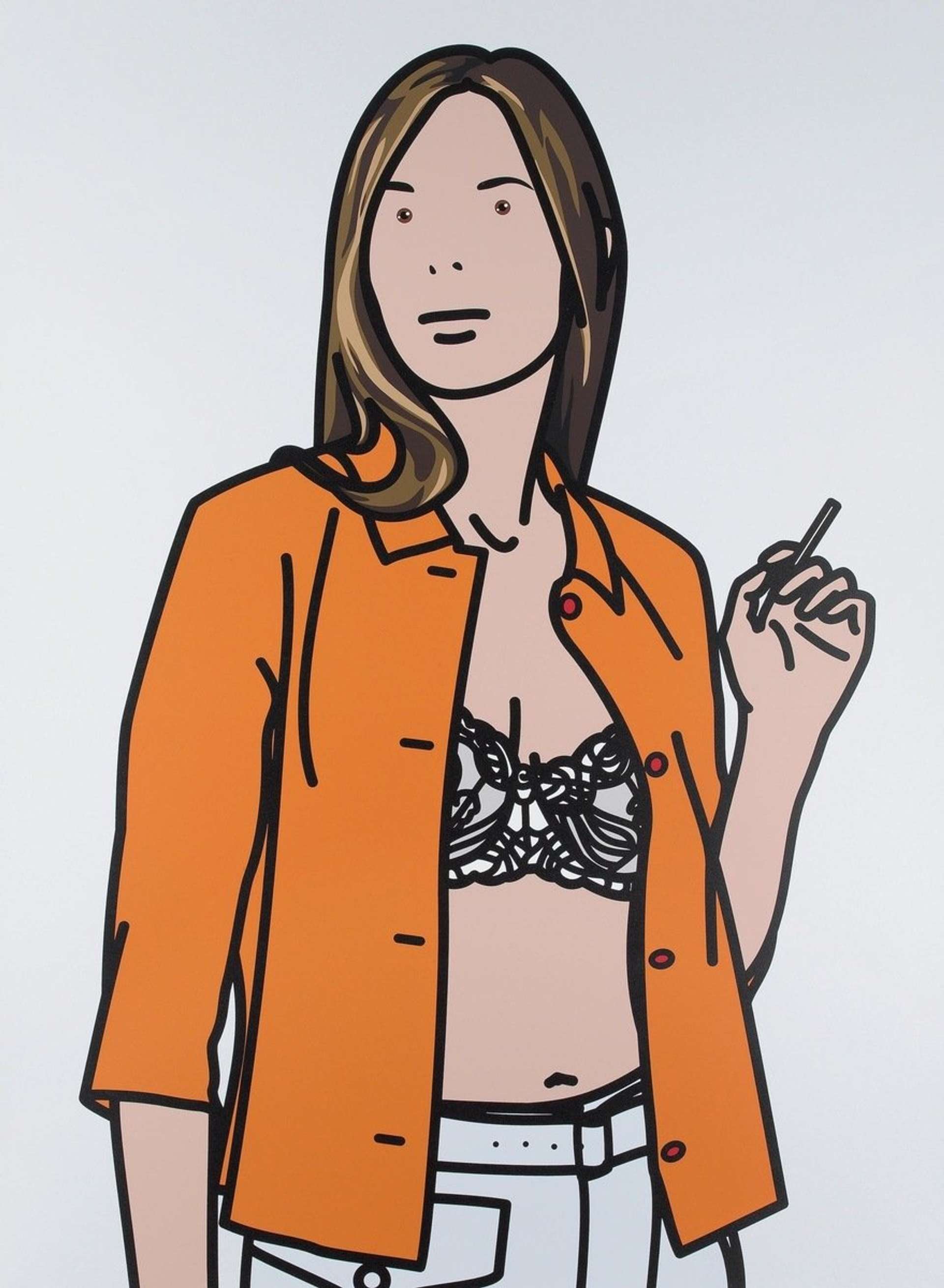 A Seller’s Guide To Julian Opie

Since emerging in the ’80s, Julian Opie has achieved critical and commercial success with work that is heavily inspired by the aesthetics of Pop Art and Minimalism. His figures can be seen on LCD scre... 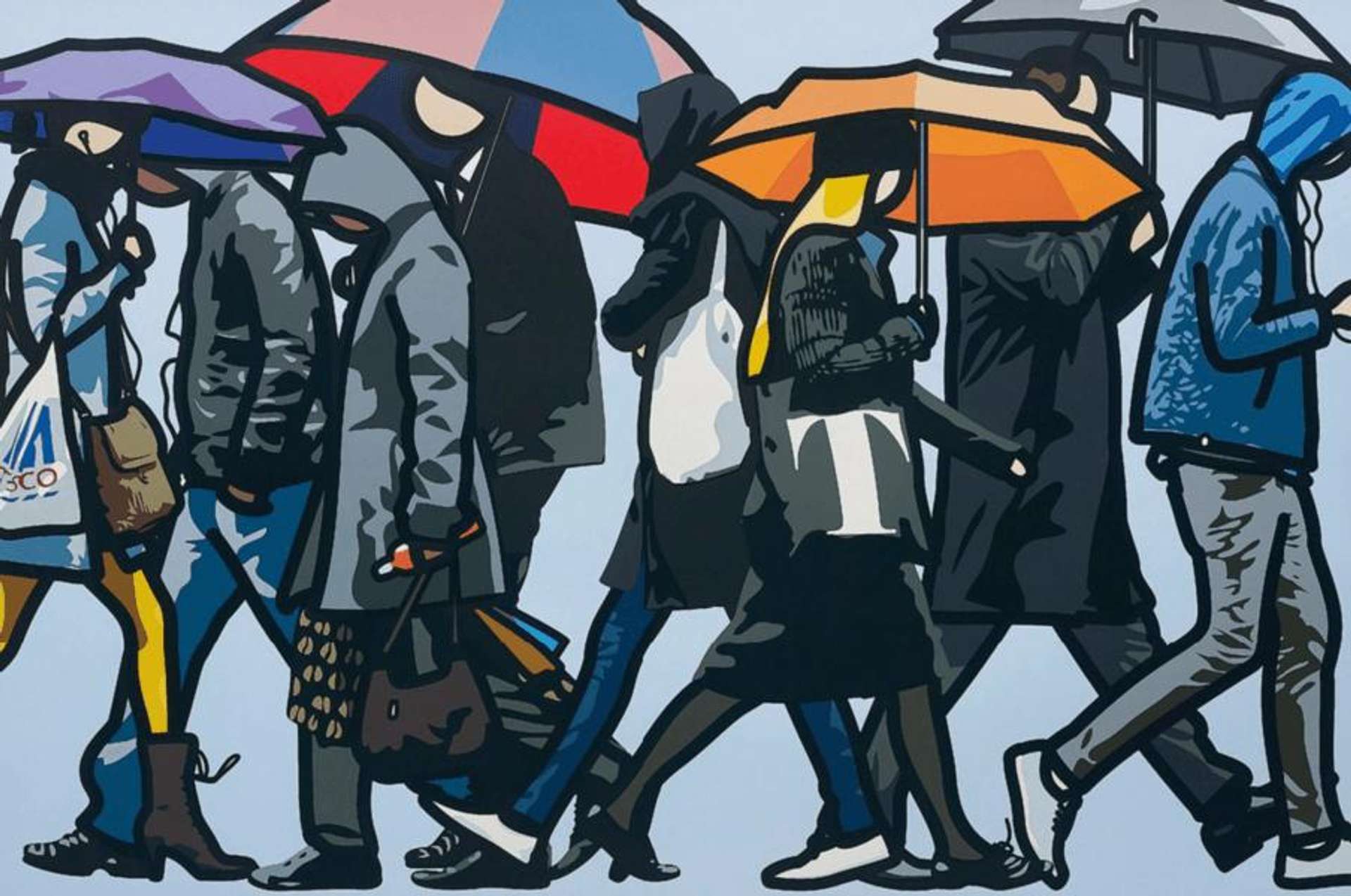 A Buyer’s Guide To Julian Opie

Whether digital or sculptural, Julian Opie’s work is immediately recognisable and strikingly contemporary. Outlined in black and often blank faced, the artist’s figures in particular encapsulate his u...