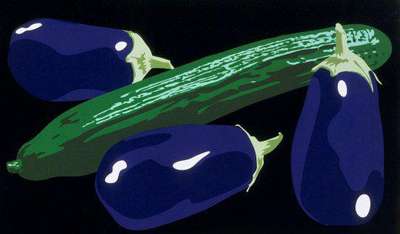 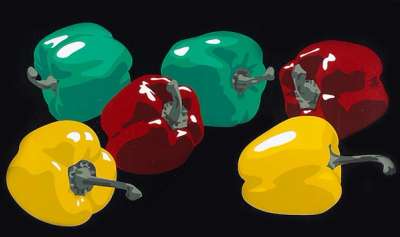 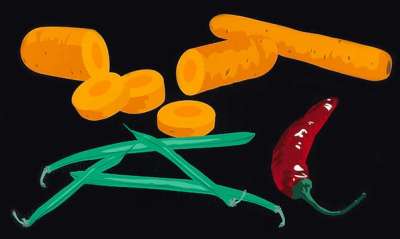 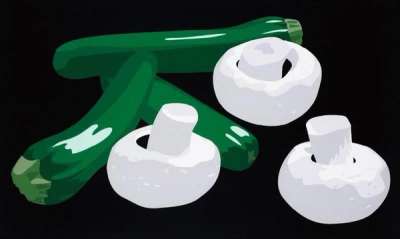 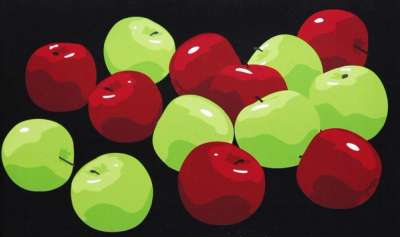 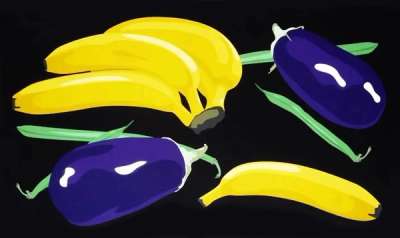 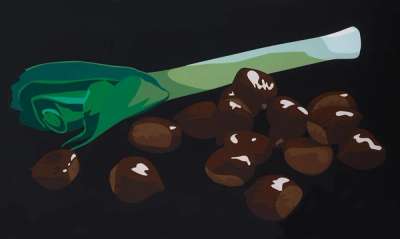 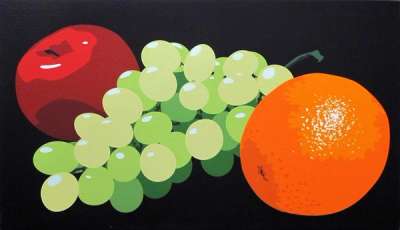 Julian Opie’s Still Life series from 2001 brings together eight still life compositions of fruit and vegetables, all depicted in bright, saturated colours and set against a black backdrop. Much like many of Opie’s works since the 2000s, this series uses very similar titles and compositions for every print.

Working within the established art historical tradition of still life painting, Opie takes the opportunity in his Still Life series to use this subject as a study of colour and tone and explore a more realistic artistic style. Reducing light and shadow into simplified shapes of block colour, this composition toes the line between tradition and contemporaneity in its clever blend of subject matter and style.

Reminiscent of 17th century Dutch still life painting in its allusion to realism and starkly contrasted dark background, Opie presents a twenty-first century version of the classic art historical genre through his use of computer technology, saturated colour and simplified form. Rather than use unusual and morally charged subjects in this series as traditional paintings of the genre would, Opie uses fruit and vegetables found in everyday life to create the subject of these prints.

Throughout his entire career Opie has been interested in engaging with the traditions of art history, notably in his works A Pile of Old Masters (1983) and Eat Dirt, Art History (1983). Engaging with canonical styles of art history, Opie demonstrates his interest not in representing reality but how reality is represented to the viewer. Still Life with Bananas, Aubergine and Green Beans is also indicative of Opie’s claim that the artist and viewers of art will always be constrained by the principles and traditions of art history. Of this in relation to his work, Opie has said, “It was an acknowledgement of the hopeless position of the art student in light of art history, but also a rally call not to feel overwhelmed by it.”

Luc And Ludivine Get Married

We Swam Amongst The Fishes