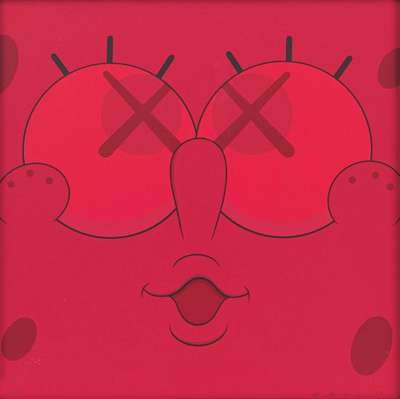 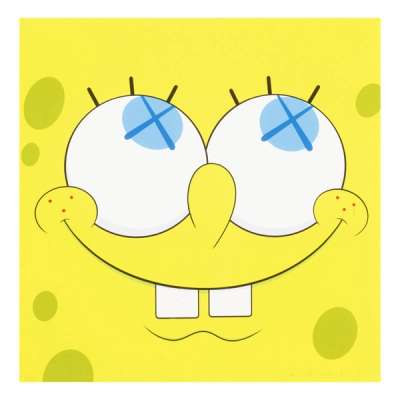 Join the only investment collectors' network dedicated to Prints & Editions

Produced in 2011, Kawsbob is a collection of three signed screen prints by the prolific American artist and designer, KAWS, aka Brian Donnelly. Each print in the collection was released in an edition of 100 and depicts a close-up of the much-loved and universally recognised cartoon character, SpongeBob Square Pants. The prints come in three colours, one yellow, maintaining SpongeBob’s original colouring, one red and one black. SpongeBob is pulling a different face in each print, which reflects the cartoon character’s wit and charm. The cartoon character is drawn using bold, black gestural lines and SpongeBob’s eyes are replaced with Xs, a signature element of KAWS’ visual language. The collection captures KAWS’ flat graphic style and love of colour.

KAWS’ visual style can be traced back to his interest in and experimentation with graffiti. As a teenager, Donnelly created the tag KAWS, which is where the artists’ name originates from. KAWS chose the name because of the way the letters looked when arranged together in bubble writing, not because of any deep significance or meaning. Donnelly started tagging buildings in New Jersey, where the artist grew up, and continued practising graffiti in New York when he moved to study illustration at the School of Visual Arts. In New York, KAWS would unlock the cases of adverts that plastered phone booths and bus stops in order to deface the adverts and reconfigure them in his own graphic style. It was while KAWS was spray painting the streets of New York that the artist developed his earliest cartoon characters, such as Bendy and Accomplice. The process, which can be likened to Banksy’s street art, became known as ‘subvertising’ and KAWS has gone on to subvertise in cities all over the world, such as Paris, London, Berlin and Tokyo. KAWS’ interest in and practise of graffiti means the artist is frequently compared to Keith Haring and Jean-Michel Basquiat, two leading 20th century artists who emerged from the New York City graffiti subculture of the 1980s.

As well as delving into the New York graffiti scene, KAWS also worked as a freelance animator for Jumbo Pictures, where he honed his excellent draughtsmanship, working on the backgrounds of animation series such as 101 Dalmatians, Daria and Doug. KAWS’ experience in animation and graffiti marks his work and played a significant role in the development of the artist’s unique visual style.

The Kawsbob collection reflects KAWS’ turn to television in the 2000s, in which the artist chose to work with a variety of well-known cartoon characters, as opposed to creating his own original ones. Along with SpongeBob Square Pants, KAWS has appropriated and adapted popular figures such as Mickey Mouse, the Smurfs, Astro Boy and The Simpsons. All these recognisable figures are rendered in KAWS’ signature visual style, with skull and crossbone heads and crossed out eyes.

Alongside Keith Haring and Jean-Michel Basquiat, other artists that have influenced KAWS are traditional painters such as Gerhard Richter, Claes Oldenburg and Chuck Close. KAWS has also been compared to Andy Warhol due to the way he blurs the boundaries between high and low art and his incorporation of well-known Pop culture references into his artworks.