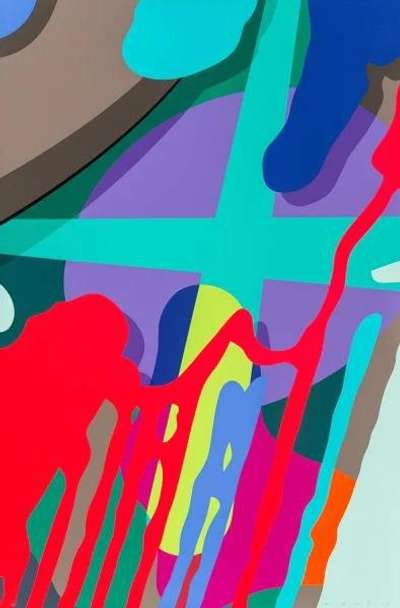 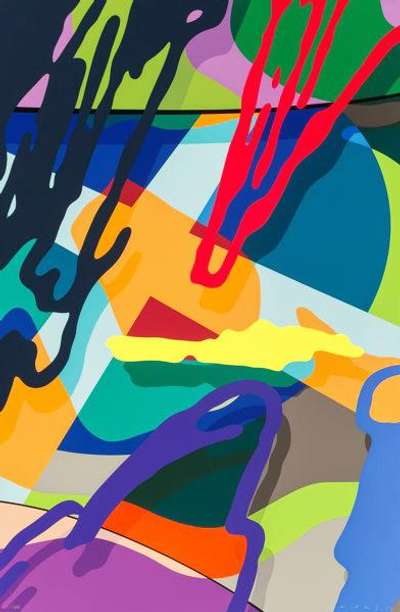 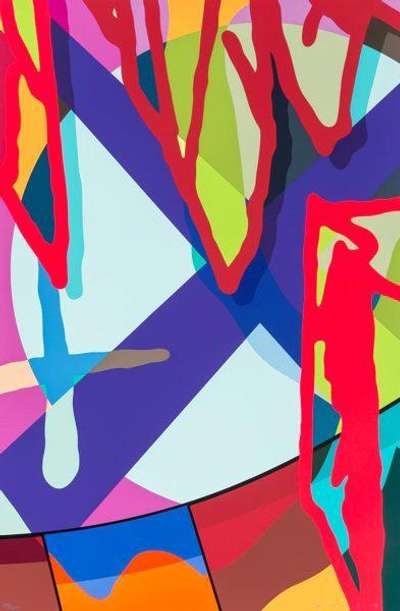 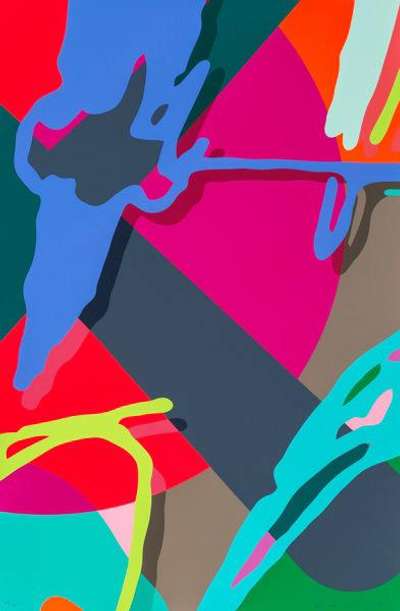 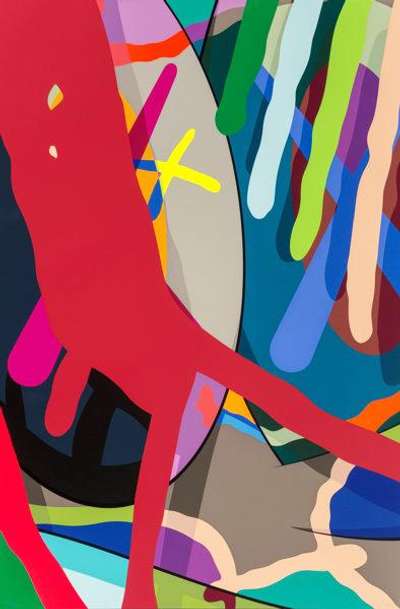 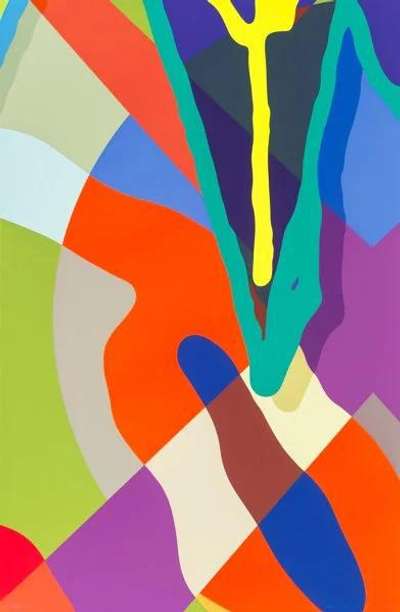 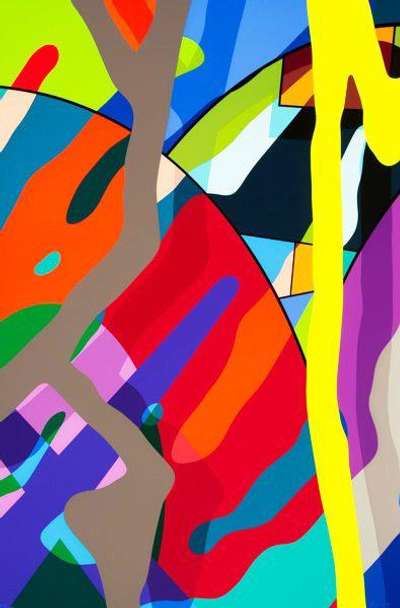 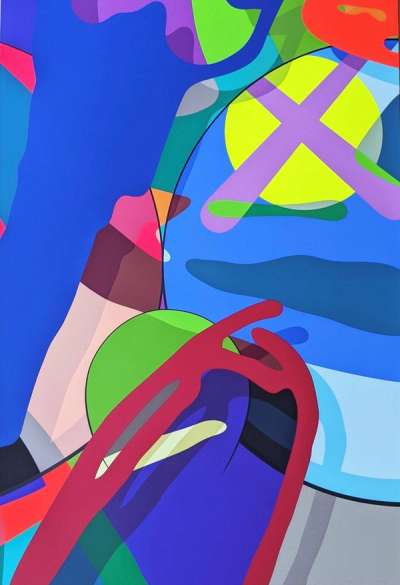 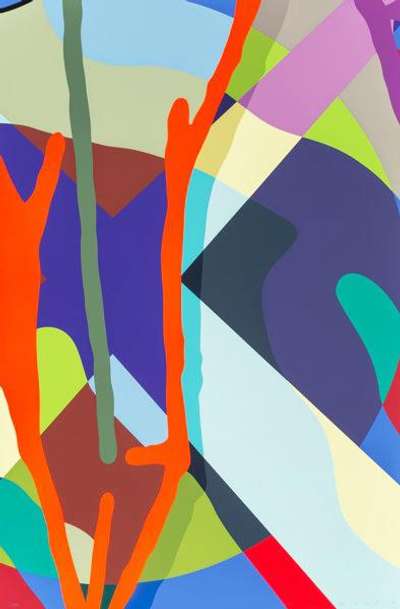 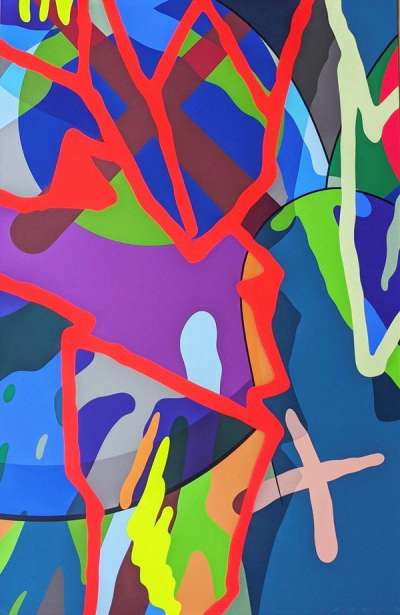 The Tension series, created in 2019, is one that celebrates KAWS artistic origins, with the bright, gestural forms reminding us of graffiti. The prints in the collection, made by the renowned American artist and designer, KAWS, come in an edition size of 100.

By 2019, KAWS had become a critically acclaimed artist, known all over the world for his bold and daring designs, as well as his inventive stock of cartoon characters. KAWS had developed a strong global following and worked with prominent celebrities such as Kanye West and Pharrell Williams.

Tension is a collection of prints that can be hung as a set together to create an exciting and dynamic display. The prints capture the essence of KAWS’ style which is rooted in graffiti, street culture and animation. Each print has a unique composition of bright and bold graffiti shapes. The designs in this collection are more abstract than other prints made by the artist, and do not feature any of his notable cartoon characters. If looked at closely, the viewer can make out KAWS’ signature crosses in many of the prints, a trademark feature of KAWS’ visual language.

KAWS’ artistic style can be traced back to his youth and his time spent spray painting buildings in New Jersey, where the artist grew up. It was through tagging buildings that KAWS, (born Brian Donnelly), came up with his professional name, which the artist still goes by today. The combination of letters, devoid of any deep meaning or significance, were chosen by KAWS due to the way they looked together and their visual balance. The artist explains that, “When your whole art is based on the lettering you choose, you kinda figure out what works together. I just liked the shapes of the k, a, w, s,”. Donnelly’s tag ‘KAWS’ started appearing on buildings and trains around New Jersey and Manhattan throughout the 1990s and the artist continued developing his graffiti skills in New York where he attended the School of Visual Arts and received a Bachelor of Fine Arts in illustration in 1996.

It was in New York that KAWS developed his practise known as ‘subvertising.’ The artist would unlock advert cases in phone booths, train stations and bus shelters in order to deface the advertisements with his graffiti inspired designs. KAWS created a set of figurative cartoon characters which he incorporated into the adverts, wrapping his figures around products and making them interact with models. KAWS would also draw over the faces of models, embellishing them with his signature skull and crossbone design, crossed out eyes and Mickey Mouse hands. Many of the characters KAWS produced, such as Bendy, Accomplice and Companion, have re-appeared in his artworks since and have become closely associated with the artist’s name. KAWS’ subvertising had a political impetus behind it as it was a means for the artist to mock big corporations and poke fun at globalisation and consumer culture.