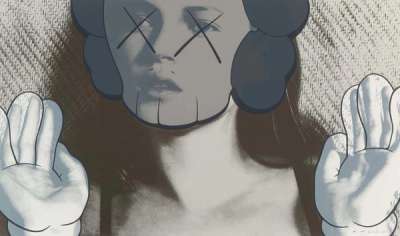 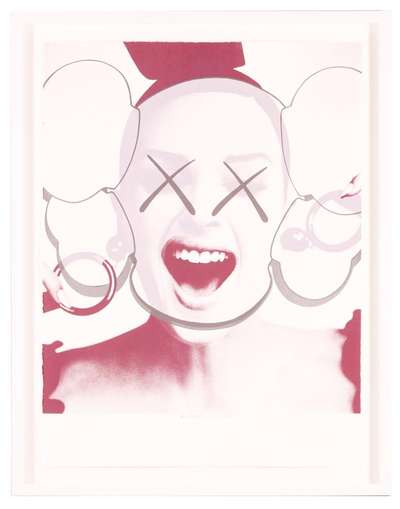 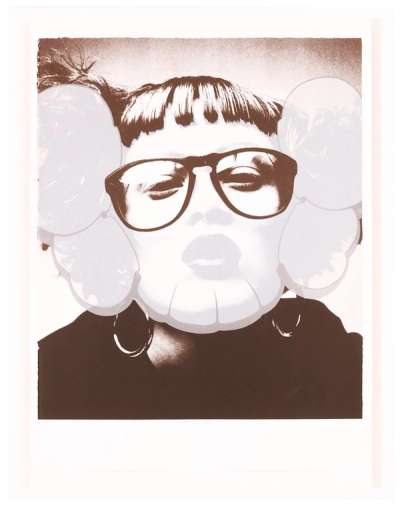 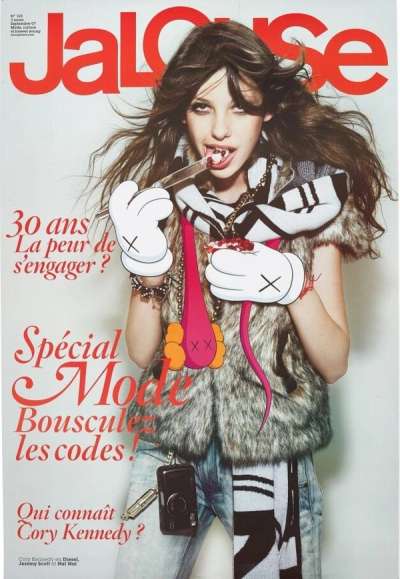 Visually different to KAWS’ usual output, Models is a series of prints where he has defaced and embellished photographs of well-known supermodels. The collection fuses themes of globalisation and consumerism, as each print shows a famous supermodel whose image has been defaced by KAWS’ graphic designs.

In each print in this collection KAWS appropriates the images of models, imbuing them with his signature visual style by adding distinctive graphic features such as crossed out eyes, Mickey Mouse hands and skull and crossbone heads. The collection is exemplary of how KAWS has developed an array of unique graphic motifs and cartoon characters which he frequently incorporates into his works. KAWS was keen to appeal to the masses and gain a wide audience. His graphic motifs, such as the skull and crosses, are a means for him to do this, as the symbols are ubiquitous and understood in all cultures. KAWS’ universally recognised cartoon character, Companion, can also be spotted in the series, notably in the lithograph print Christy Turlington Tokion Poster, 1999, in which Companion lurks timidly behind the Salvadoran-American supermodel, Christy Turlington who poses seductively in nothing but her underwear.

KAWS’ interest in consumerism, as evidenced by this collection, means the artist is often compared to Andy Warhol, the leading figure of the 1960s Pop Art movement. Warhol was fascinated with American consumer culture and advertising, and even created a series of prints, Ads, that were inspired by his favourite advertisements. Warhol was known for blurring the boundaries between high and low culture, commercial and fine art, and this blurred distinction is apparent in KAWS’ work and in the Models collection in particular.

The Models collection resonates strongly with the start of KAWS’ artistic career and his practise of ‘subvertising.’ From a young age, KAWS experimented with graffiti art, and, when living in New York in the 1990s, the artist took this experimentation a step further by unlocking the cases of adverts in phone booths and bus shelters, removing the campaigns, and modifying the images. Like KAWS does in this collection, the artist would add his cartoon figures such as Bendy and Accomplice to the adverts, wrapping the cartoon characters around the products being advertised. KAWS would also deface the faces of models, as is seen in Kate Moss, White Gloves, 2001, adding his skull and crossbones and Mickey Mouse hands. Part of KAWS’ motivation behind subvertising was to mock big corporations and the consumer goods they were selling. KAWS’ practise of subvertising has likened him to the British street artist, Banksy, and KAWS has since subvertised in Paris, London, Berlin, and Tokyo.

As well as being influenced by Warhol, KAWS’ artistic origins in graffiti and street art were likely influenced by Keith Haring and Jean-Michel Basquiat, two leading 20th century artists who emerged from the New York City graffiti subculture of the 1980s. The creation of KAWS’ vast stock of cartoon characters and repeated graphic motifs resonates strongly with Haring’s work and his impressive collection of repeated icons and motifs, such as the radiant baby, angel, flying devil and barking dog.