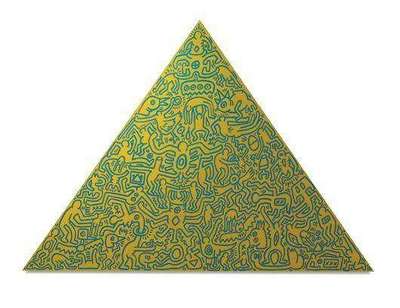 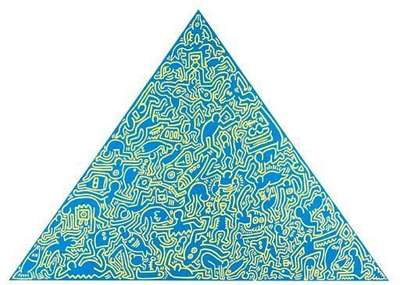 Throughout his career, Keith Haring developed his own visual language based on simple and accessible imagery. Especially towards the end of his life, prior to his death from AIDS in 1990, Haring turned to Pyramids to articulate his pursuit of a universally-readable iconography. Populated by his iconic outlined figures, the works in our Pyramids collection testify to Haring's development of his own modern hieroglyphics.

Haring's pyramids pay homage to ancient civilisations and their championing of a visual language that can still be understood millenniums later. Since his early 'Subway Drawings', Haring likewise committed himself to reducing messages to simple imagery. In doing so, Haring articulated his messages of love, hope, and a relentless striving for socio-political change that could be understood as widely as possible. His works Pyramid (blue) and Pyramid (gold) are, respectfully, a monumental testament to the virtues and vices of humanity. Pyramid (gold) is decorated with a dizzying array of Haring's archetypal figures, morphing into gruesome beasts, painfully giving birth, and torturing one another. The work has been interpreted as a grave warning of the perils of sexual joy, something particularly poignant in Haring's work after his diagnosis with AIDS. Pyramid (blue), on the other hand, is similar in composition but depicts his outlined figures in joyous harmony. The works are universally legible; their moralistic overtones speaking to Haring's use of his art to illicit social change even in this precarious year of his life.

Haring's Pyramids were not only about creating modern hieroglyphics, but a nod to the eternal legacy he hoped to leave behind after his untimely death. Perhaps the pièce de résistance of his Pyramids, Silence Equals Death is one of Haring's oeuvre-defining works, and one of the artist's final pleas for the AIDS epidemic to be addressed before his death. Adapted from a poster produced by ACT UP, an organisation that tirelessly campaigned for an end to AIDS, Silence Equals Death was fittingly produced to raise funds for the AIDS Outreach Fund. The pink triangle at the centre of the work is an inversion of the badge homosexual men were forced to wear in Nazi concentration camps, and is a symbol reclaimed by gay activist groups throughout the 1980s. While the Nazi's upside down triangle symbolised homosexual men as being the most lowly group in society, Haring upturned the symbol into one of his Pyramids to suggest the greatness of the LGBTQ community and their hopes to extinguish AIDS. As the title of the work suggests, this was not the time to 'See no evil, Speak no evil, Hear no evil', and the pyramid emerged as an eye-catching appeal to the Reagan administration for AIDS visibility.

Haring's Pyramids are, therefore, an essential part of the his iconography as both artist and activist. As the backdrop for his modern hieroglyphics, Haring used these Pyramids to create a universal visual language that could be read by all, regardless of class, gender, race, and sexuality. 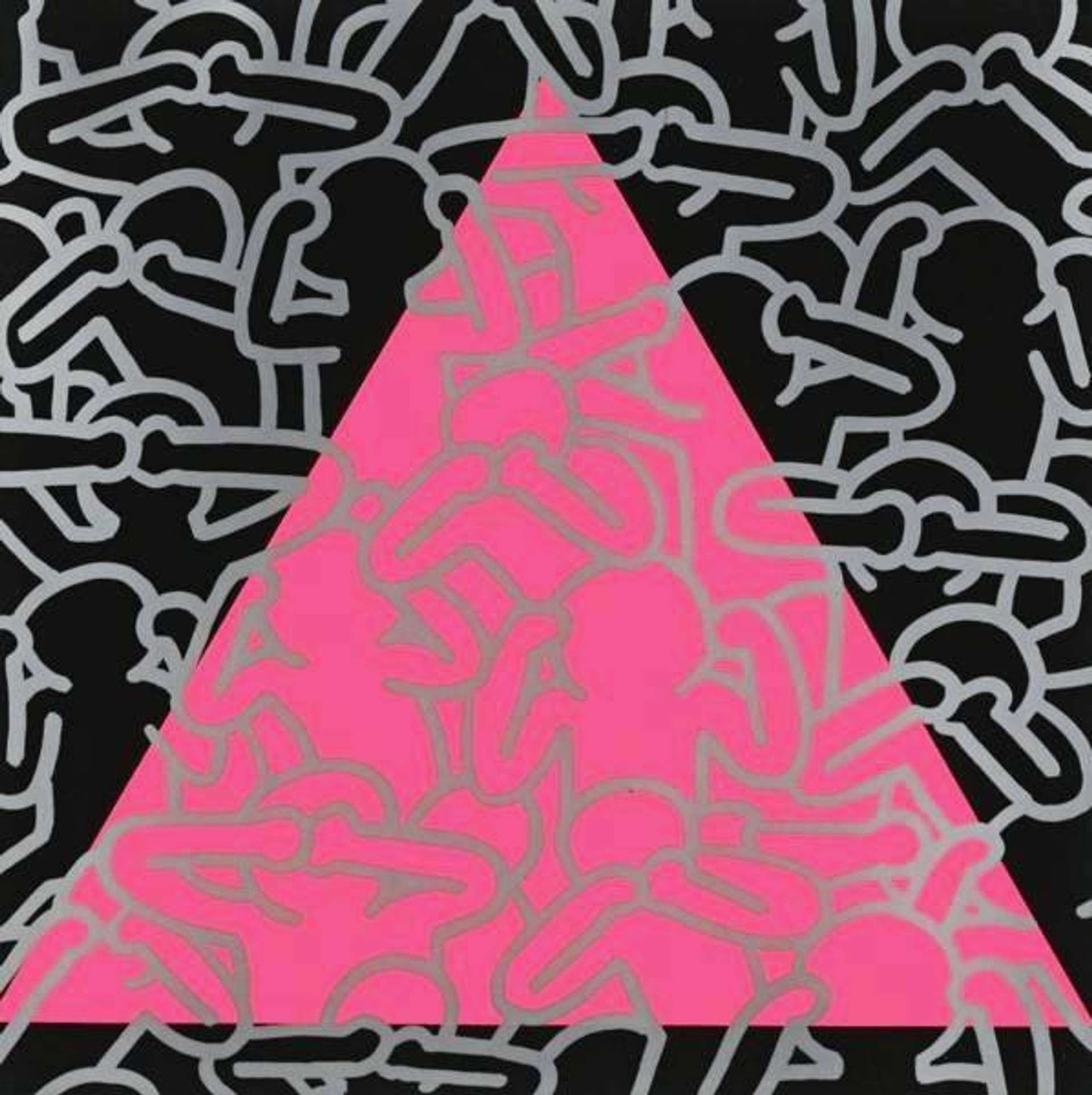 1. The pyramid became an empowering symbol for LGBTQ+ communities in Haring's work.

The upside-down pink triangle was a symbol perpetuated by the Nazis to identify and alienate homosexual men. With the organisation ACT UP, who campaigned tirelessly for AIDS visibility, Keith Haring flipped the triangle into one of his pyramids. Populated by his iconic outlined figures, Silence Equals Death uses this pink pyramid as a triumphant symbol. This work, alongside a lot of Haring's later oeuvre, advocated for socio-political action to end the AIDS epidemic once and for all. 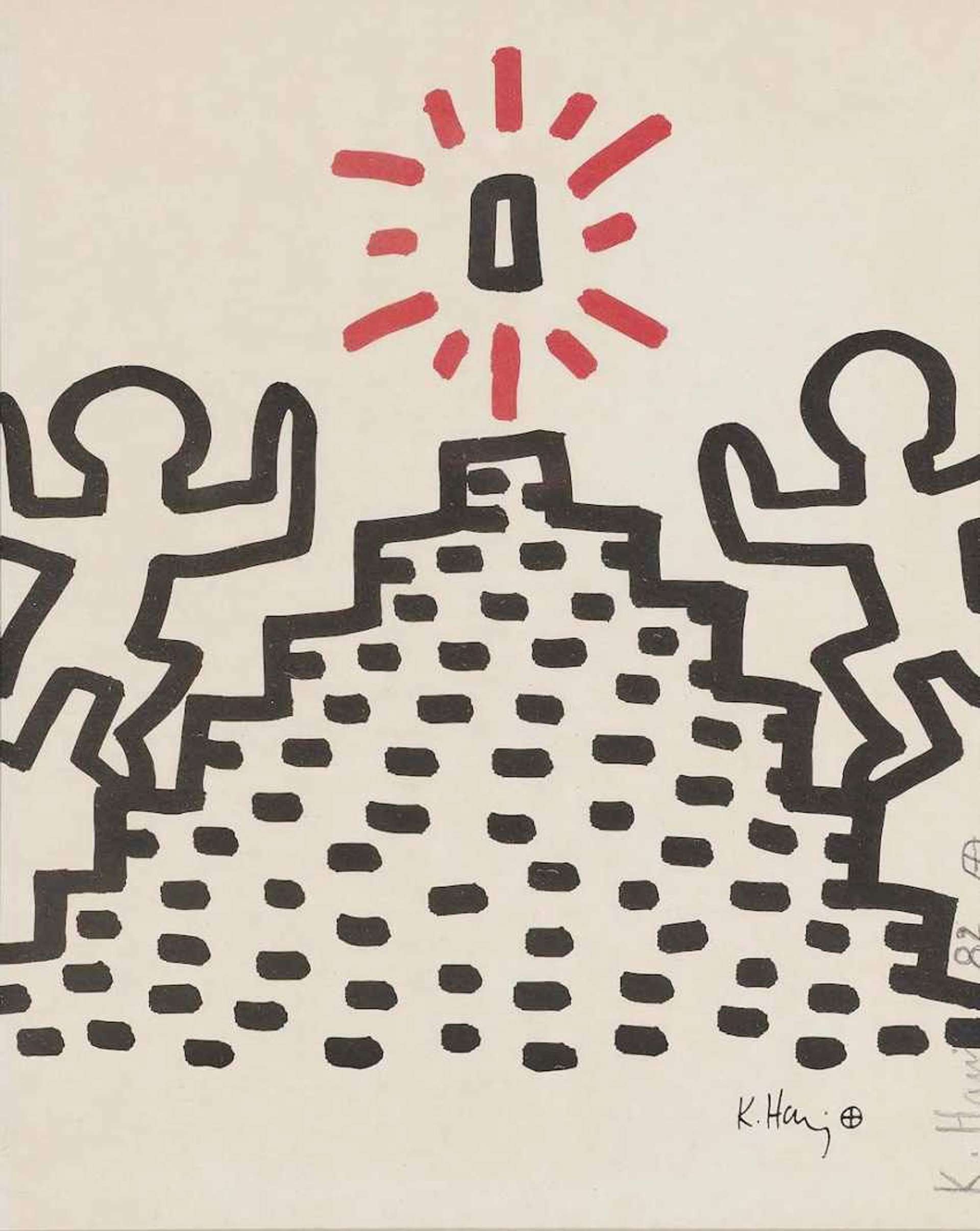 2. The pyramid is an important backdrop for Haring's modern hieroglyphics.

Keith Haring committed himself to creating a universal, visual language in his artwork. By foregrounding the pyramid, Haring revealed his relentless crafting of these modern hieroglyphics. Coupled with his simple outlined figures, Haring created an iconography which is universally legible, regardless of language, class, sexual, and gender barriers. 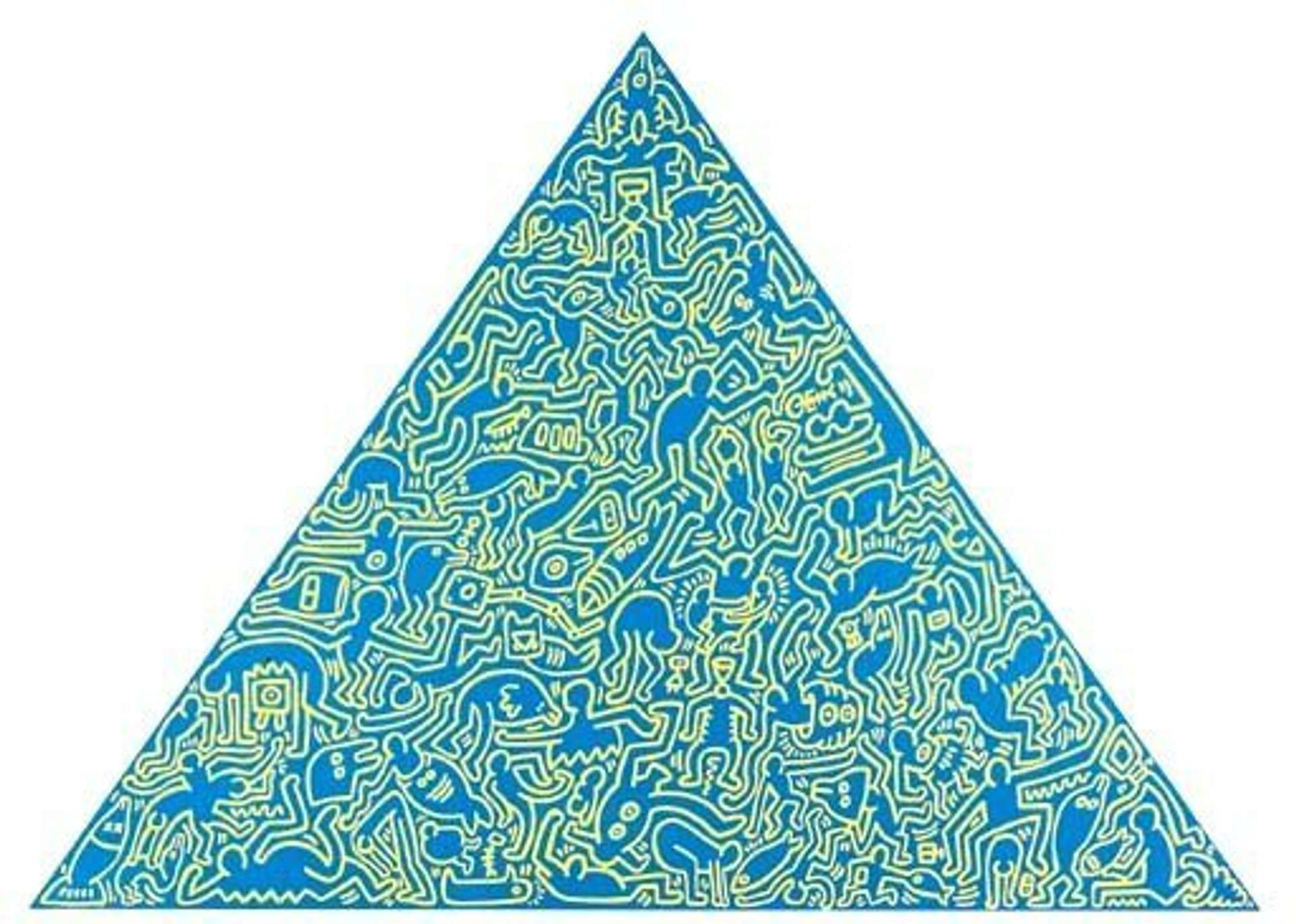 3. Haring used the pyramid as the backdrop for some of his most moralistic works.

Haring's outlined figures are famously gender-less, race-less, and class-less, making them instantly relatable. Thanks to this, his artwork represented the many strengths and the many pitfalls of humanity. In Pyramid (gold) and Pyramid (blue), Haring represents the vices and virtues of mankind, respectfully. The entire pyramid is filled with a flurry of Haring's archetypal figures, conveying powerful moral stories to the viewer through images alone. 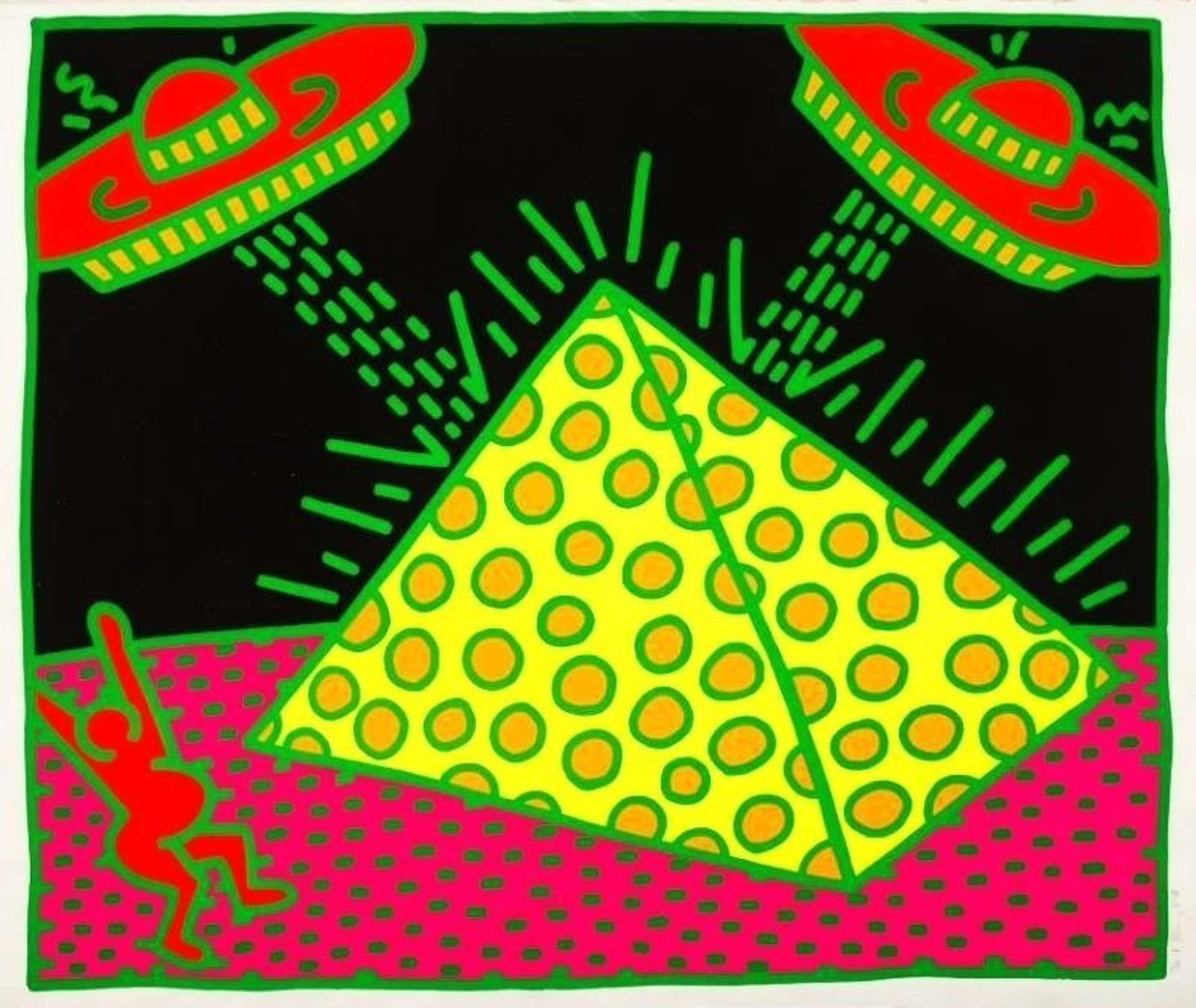