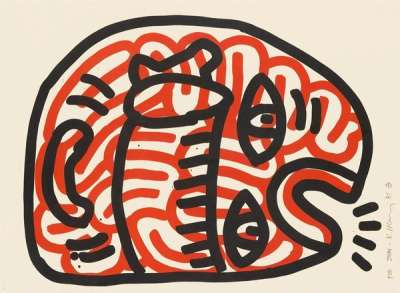 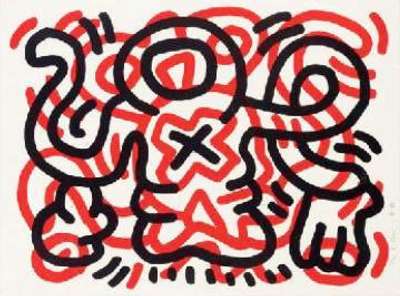 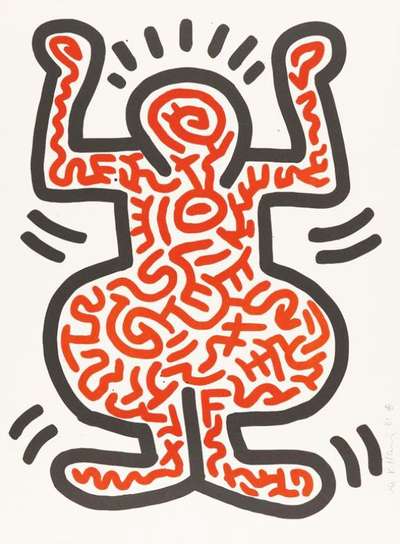 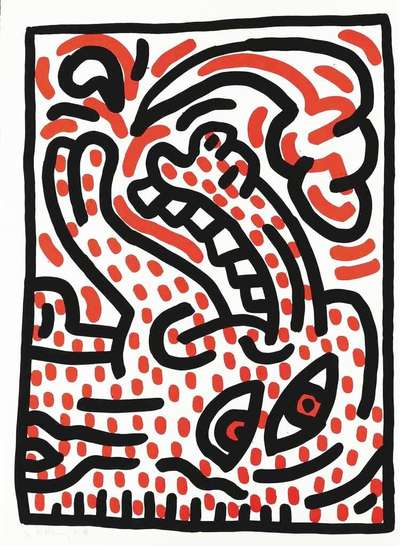 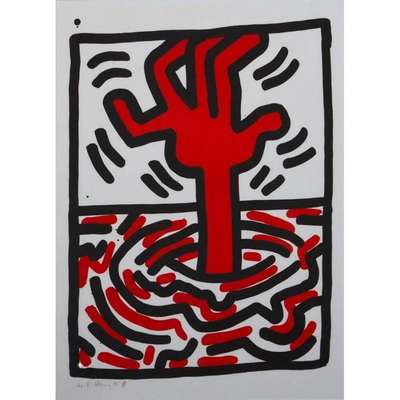 5 striking lithographs by Keith Haring created in 1985, Ludo is made up of figural images in his iconic linear style and with frenzied lines The series is made up of figural images depicted in the Pop artist’s iconic linear style and frenzied lines. Each print is set against a plain white backdrop, and a frenzy of red lines fill the dark outlines of the figures across the series, working to produce abstract and ambiguous images.

The Ludo series is reminiscent of Aztec or Aboriginal art through Haring’s use of flowing, organic shapes and thick bold lines to create a pattern that plays out across the image surface. Explaining why many of his works resemble Aztec or Aboriginal art, Haring has said “My drawings don’t try to imitate life; they try to create life, to invent life,” something that he believed aligned with so-called primitive ideas. The Ludo series is exemplary of this notion by forming a rhythmic, kinetic set of compositions that focus on pattern rather than realism.

Throughout the Ludo series, Haring maintains a dominance of the colour red, depicting eyes, limbs, and other body parts in abstracted forms. There is a sense of anxiety running through each print that differs from much of his earlier work, alluding to a turning point in Haring’s life. Reminiscent of Haring’s Apocalypse series from 1988, this series provides the viewer with a hellish visual narrative showing eyes, limbs and other body parts in abstracted forms. Depicted in bold lines, gestural marks and bright red colour, the Ludo series brings together a set of dynamic images that evoke a sense of chaos and violence. Indeed, this series marks a moment of transition for Haring. As the AIDS epidemic overtook his community in the mid-1980s, Haring’s artwork reflected his increasing involvement in advocacy for the disease.