This signed etching from 1989 is a limited edition of 80 from Keith Haring’s The Valley series. The Valley Page 15 shows an image of three unusual looking figures who make up the fictional rock group ‘Glowing Corn’, indicated by the writing in the print. Despite the frenzied subject matter of the series’ narrative and energy of the image, Haring maintains a simplicity in line that he is renowned for, depicting this image exclusively in black and white.

The Valley series is one of many by Haring that when considered in full, tells an unusual story as the sequence of images, combined with text, unfold. Reminiscent of his Apocalypse series (1988) completed one year earlier, Haring’s images are chaotic, with Burroughs’s text-based ‘cut-up’ writing method forming the basis of Haring’s pictographic style.

Haring’s later works such as The Valley Page 15 have been compared within art historical narratives to the chaotic storytelling of Hieronymus Bosch and the fierce liveliness of his friend and contemporary Jean-Michael Basquiat. This particular series is representative of a stylistic shift exemplified in his Cranbrook Mural (1987) that introduced intentional blotches, drips and themes around death and the end of times. 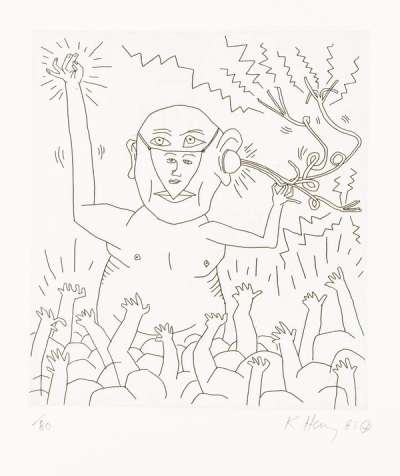