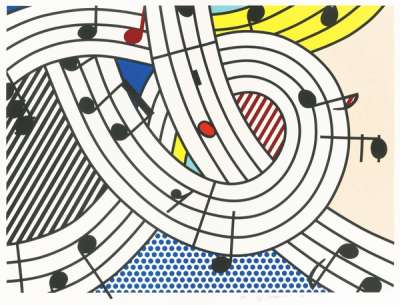 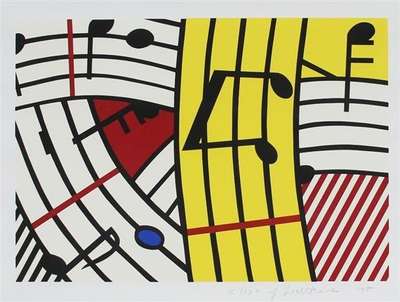 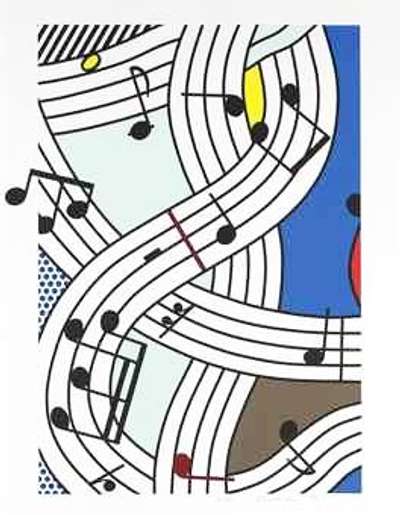 The graphic, flowing Composition series responds to the energetic, improvisatory nature of music, which Lichtenstein himself always adored, He drew inspiration for his artworks from various sources ranging from comic books to graphic design. Lichtenstein manufactured his prints with the help of innovative mass-reproduction techniques and was immensely fascinated with advertising processes. He began to replicate Ben Day dots and stripes early on in his career, mimicking an array of industrial methods.

Lichtenstein represents an integral part of the development of Pop, seeing as he appropriated the aesthetics of past and present artistic creations in broadly accessible terms. Boldly challenging what constitutes high versus low brow culture, the artist questioned the distinction between museum worthy fine art and highly commercialised media imagery. He granted means for the public to acquaint themselves better with the realms of contemporary art.

Lichtenstein was born into a musically inclined family, his mother being a talented piano player, and was raised during New York’s infamous jazz age of the 1930s. The influence of this era stayed with him throughout his career, having an initially subtle then quite direct impact on his creative output.

Lichtenstein spent his adolescence frequenting jazz clubs, concert halls and the Apollo Theatre in particular. He even established his own band with his friends, where he played the flute, the clarinet and the piano. The artist’s early enthusiasm for music fuelled a number of his prePop paintings of the 1950s, some of which portrayed jazz musicians on stage.

Music remained a great love for Lichtenstein as his career progressed and provided an inexhaustible well of subject matter for several of his iconic works. See the musical undertones present in his Brushstroke Faces for instance, which is a cunning examination of the ideology behind Abstract Expressionism.

In his later years and up until his passing in 1997, Lichtenstein practiced mastering yet another instrument; the saxophone. His paintings from this period explored ways in which the spontaneous qualities of music could be translated onto a canvas, using the traditional means of art and the methodology of commercial design.

In his Composition series, Lichtenstein experimented with the flattened patterns of an imaginary music sheet. Responding to the improvisatory and energetic nature of music, staves and notes swirl across the prints, liberated from their usual horizontal constraints. The artist amplifies his illustrations through his signature bold contours and thick lines, creating a symphonic mixture of colour and form.