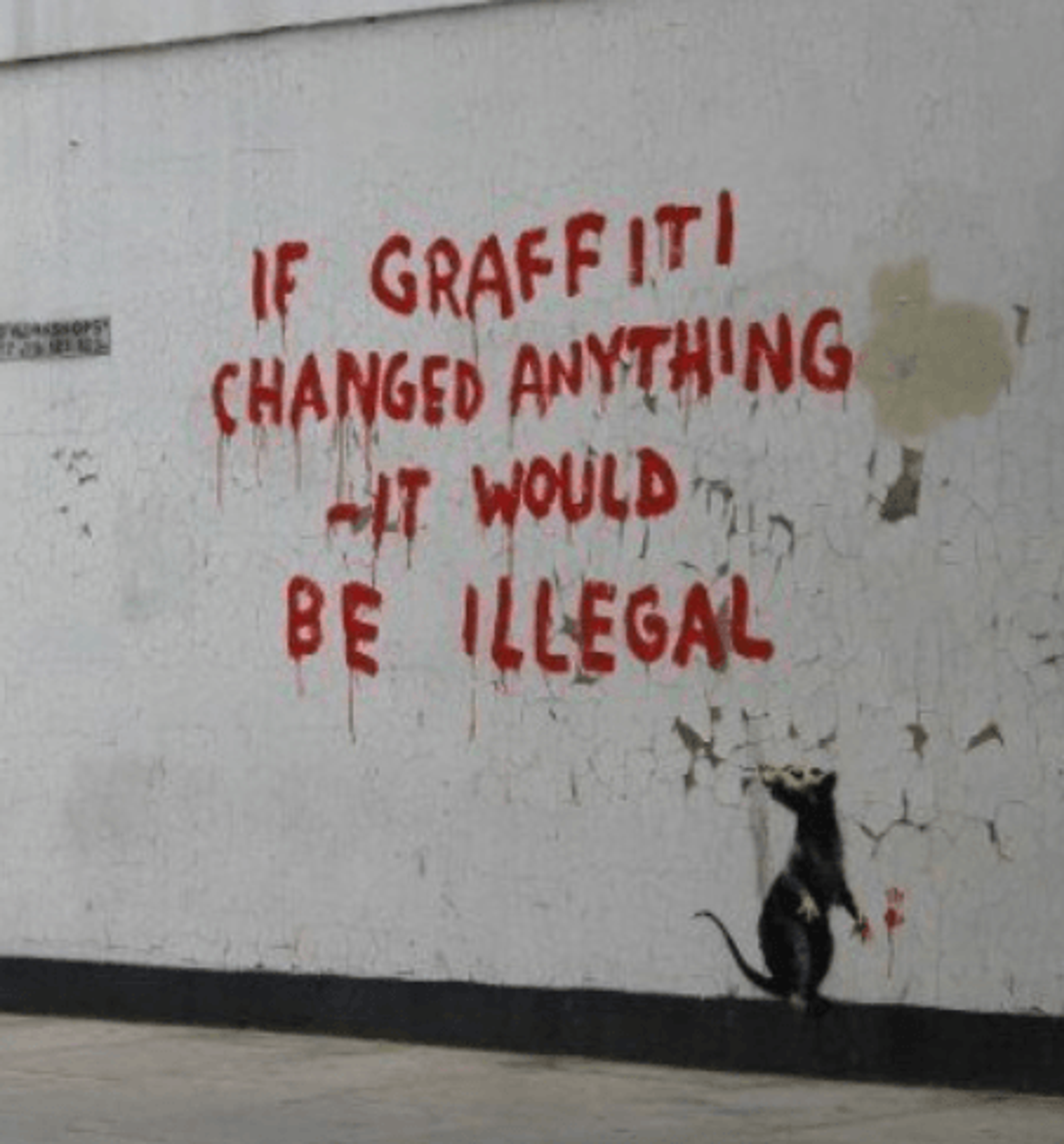 If Graffiti Changed Anything It Would Be Illegal © Banksy 2011

Since he first appeared on the street art scene in Bristol around the early 2000s, Banksy’s art has conquered city streets, buildings, the London Underground and gallery walls around the world from Paris through New York to the West Bank and even his own bathroom during lockdown. London has some of the best-known public artworks by the notorious artist, with each mural having its own unique story – even though many have since then been removed, covered with plexiglass for protection, vandalised or peeled off by thieves. Here’s the top 12, their date of appearance, location and the message behind the art.

If Graffiti Changed Anything It Would Be Illegal © Banksy 2011
1.

If Graffiti Changed Anything It Would Be Illegal, 2011, Clipstone Street, Fitzrovia

Shortly after it appeared, a local campaign was launched to save the mural from removal by Westminster City Council. Today, it is protected by a layer of Perspex, even though much of it has been covered in tags and graffiti.

These two pieces of graffiti are among Banksy’s earliest works in the British capital, located in the courtyard of the night club Cargo in the heart of Shoreditch, now protected with perspex. This courtyard is a hub for various well-known graffiti artists, including French artists C215 and Thierry Noir, Israeli artists from Broken Fingaz Crew and the Italian artist, Ozmo.

Guard Dog is a mockery of the police and the authorities, depicting a policeman and his poodle on patrol in a designated graffiti area. His Master’s Voice also refers to as HMV Dog or HMV, which was released as a print in 2003. The work features a dog pointing a bazooka towards a gramophone. The image highlights the contrast between conservatism represented by the vintage gramophone and progressive youth ideals embodied by the rebel animal.

Also known as the Falling Shopper, this Banksy mural is located on Bruton Lane on the side of a large office building in the heart of the commercial West End district.

The mural was painted in November 2011 in broad daylight. A scaffolding and a tarpaulin were used to make sure nobody caught the artist red-handed. Shop Till You Drop is still visible, even if quite damaged.

Looming over passers-by from over two storeys high, it depicts a woman with a full shopping trolley mid-fall from the top of a building. Banksy’s aim was to point out the dangers of consumerism, which is a topic he revisits often in his limited editions prints such as in the work Festival (Destroy Capitalism).

Also known as Tesco Kids, Banksy’s Very Little Helps mural is located on Essex Road, North London. Painted in 2008 on the side of a pharmacy, the artwork depicts a group of three children ceremoniously pledging their allegiance to the British supermarket chain Tesco while one of them is raising a Tesco carrier bag on a flagpole. The image is a critique on society’s reliance on mass consumerism and multinational corporations. Banksy also released Very Little Helps as a print in 2008.

Even though it was quickly covered in Perspex, Very Little Helps has been vandalised on several occasions and it is currently partially damaged. The flag has been painted over and replaced with a tag from Robbo, a graffiti artist who often targets Banksy’s works.

Choose Your Weapon, 2008, The Grange, Bermondsey

This mural appeared on a wall in The Grange in Bermondsey, South London in 2010. The artwork was boarded over shortly after. It’s one of Banksy’s most well-known images of a hooded man with a barking dog on a leash that is a tribute to legendary artist Keith Haring’s Barking Dog. There is a sharp contrast between the cartoon-like dog and its master’s hyper realistic representation. Banksy often references other famous artists in his work, such as Andy Warhol in Soup Can.

Choose Your Weapon was released as a print in multiple colours in 2010, as the last new original print as of today that is now in high demand on the secondary market.

Banksy’s Cash Machine Girl was created in May 2008, close to Exmouth Market in North London. The artwork depicts a young girl being lifted by the eerie robotic arm emerging from a cash machine.

Much like with other murals like Shop Till You Drop above, or with Banksy’s limited edition prints like Sale Ends, this artwork appears to have a blatantly anti-capitalist message, warning passers-by about the corrupt power of banks and how you can easily become ‘kidnapped’ by capital.

Banksy’s playful Bubble Slide Girl mural was painted onto the sidewall of a youth club in Hackney around February 2008. Unfortunately, only a faint outline of this work is still visible since it has been removed. The image depicts a little girl blowing bubbles and using a drainpipe as a slide. It’s a great example of one of Banksy’s more positive works through which he might be trying to tell us that through play and maintaining a childlike, light-hearted spirit, we can always find a silver lining and adapt to whatever harsh circumstance.

The famous print Girl With Balloon, released by the artist in 2004 contains a similarly uplifting message and a sense of hope. The work was originally a mural on the Southbank in London, accompanied by a quote saying ‘there is always hope’ before it was eventually painted over by the council.

The quirky Phone Tap mural can be found in a small car park on Chrisp Street in East London, just two minutes away from All Saints DLR station. It has been quite intact since 2011 even though there are some multicoloured paint splatters around it. It’s one of the examples of how Banksy incorporates the natural urban environment into his murals – he depicts a phone ringing to an actual water tap on the street.

Next to it stands a stick figure with a baffled expression saying, “Oh no… my tap’s been phoned”. This stencil work is a tongue-in-cheek reference to the Rupert Murdoch phone hacking scandal that was all over the media in the summer of 2011. It also engages with the theme of surveillance that is omnipresent throughout Banksy’s works, including prints like Radar Rat from his famous Rat series released in 2004.

Banksy’s Wallpaper Hanging is a vibrant piece of street art located beside Regent’s Canal tunnel and under the London Transport Police Headquarters in Camden. The mural, painted in 2009, represents a city worker in Banksy’s iconic stencil style, covering the work of another graffiti artist painted in 1985 with grey wallpaper.

This particular wall became the battleground of a graffiti war between Banksy and the now deceased London graffiti legend King Robbo. Shortly after, Robbo struck back and covered Banksy’s piece on the pretext that he broke the underground code of conduct.

The wall had undergone eight other modifications from both artists. The feud stopped when King Robbo was hospitalised for life-threatening head injuries. When Banksy heard about King Robbo’s serious health condition, he painted an ode to Robbo’s original graffiti piece. As a tribute to Robbo, the mural was restored to its original form with slight changes.

I love Robot Rat is another example of the graffiti war between Banksy and Robbo. Painted on Chiswell Street in Islington, Banksy’s piece depicts a stencilled ghetto rat holding a placard which originally read “London doesn’t work”, which he created in 2004. Later it received a tag from Robbo, who reworked the placard by adding his own name in red letters.

The placard rat motif was released as a various limited edition prints like Welcome to Hell and Get Out While You Can in 2004. Banksy’s rats are among his most well-known and popular pieces, which have shown a stunning increase in market value over the years. You can read more about why to invest in Banksy rats here.

The large-scale, striking Yellow Flower mural on Pollard Street around Bethnal Green is another example of Banksy’s use of existing features of the urban landscape to complete his work. He painted an extension the double yellow lines of the road across the pavement to crawl up the wall and bloom into a bright, cartoonish yellow flower that is in fact quite different from his usual style. However, he also added one of his signature stencil figures with a paint roller to crouch next to the flower, which now is mostly obscured with other graffiti but still faintly visible. The yellow flower is still clear.

This Banksy stencil figure appeared on Jeffrey Street in Camden in June 2011, as an addition to graffiti artist Daniel Halpin’s, aka Tox’s, tag. Tox was previously convicted for tagging multiple locations in London over a period of three years and was mocked as ‘no Banksy’ by the prosecution due to his lack of creative artistry with his graffiti works.

As a response, Banksy created an artwork of a little boy blowing the Tox tag as a bubble – whether as an act of solidarity or to make fun of the other artist is up to the public to decide. It’s undoubtedly one of his cheekier pieces that stays true to his graffiti artist roots and shows his enduring connection to the London scene.

Banksy: Master of the Stencil

The story goes that when Banksy was just starting out on his graffiti career in the early 90s in Bristol he would be painting freehand when someone would come along and he would have to run away, leav...
Banksy

As one of the most elusive figures on the contemporary art scene, Banksy continues to be the subject of news stories and rumours debating his true identity and the impact of his latest stunt. While so...
Banksy